Volkswagen has made it clear that it wants to become an EV leader, planning for half of its entire lineup to be battery electric by 2030, and its headway over the past year suggests that rapid progress has been made—despite the stresses of the pandemic and the current industry-wide chip-shortage woes. The Volkswagen Group has revealed it has delivered 122,100 battery-electric cars worldwide in the third quarter of this year, representing a 109% increase over the third quarter of 2020, pushing its total EV lineup share to more than 6%. By comparison, during this period in 2020 the VW Group delivered 58,600 battery-electric models worldwide, with these numbers representing battery-electric models from all VW Group brands including Audi, Porsche, Skoda, SEAT, and Volkswagen. 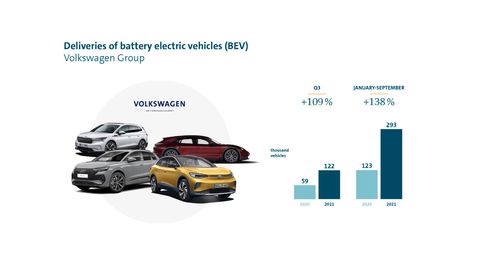 Europe was still the main market by volume, with 81,700 BEVs finding homes in the third quarter of 2021—almost doubling the group’s sales over the same period in 2020. The US saw EV sales from the group double in this quarter over the same period in 2020, with approximately 8800 recorded deliveries across the three group brands: Audi, Porsche, and Volkswagen, with the ID.4 having gone on sale earlier in the spring.

Speaking of the ID.4, it was this model that has led deliveries in the nine-month period with 72,700 units. The ID.3 was a close second with 52,700 examples delivered, while the Audi e-tron came in third with 36,100 units. When it comes to Audi alone, we can probably expect the brand’s EV deliveries to double or triple in another year with the arrival of the e-tron GT sedan and the Q4 e-tron pocket SUV this year. The Taycan and its Cross Turismo siblings have recorded 28,600 deliveries, eclipsing the Porsche 911 itself, while Skoda came in fourth with 28,200 sales of its sole battery-electric model—the ID.4-based Enyaq iV.

Still, China was the leader when it came to percentage of growth if not outright volume, with the group delivering 28,900 vehicles in the third quarter, compared to 7000 in the same quarter of last year.

“As planned, we significantly accelerated the BEV market ramp-up in China in the third quarter, and we are on track to meeting our target for the year of delivering 80,000 to 100,000 vehicles of the ID. model family,” said Christian Dahlheim, head of VW Group sales.

Among the VW Group brands, Volkswagen was the leader by a big margin, with 75,000 of the quarter’s sales belonging to VW Passenger Car Unit. Wolfsburg has brisk sales of the ID.3 and ID.4 in Europe to thank for this, with the smaller ID.3 experiencing some significant wait times due to high demand.

Audi came in a distant second among the VW Group brands with about 20,000 cars delivered, while Skoda came in third with 14,400 vehicles finding homes. Porsche came in fourth with 8800 cars delivered, after the Taycan Gran Turismo joined the Taycan sedan in the lineup earlier this year.

While numbers for the ID.4 are encouraging, it’s clear that the VW brand will need more electric models soon to offer some variety to EV buyers, even if the ID.4 sits in a very favorable segment. It remains to be seen whether VW will be able to avoid offering the ID.3 in the states in the long term, even as it plans models above and below the current ID.4.