The Triumph Stag may have been Britain’s affordable muscle car of the 1970s, but its 3.0-liter V8 wasn’t among the easiest to live with, frequently suffering from blown head gaskets to deteriorated timing chains, among other ailments. This hasn’t stopped collectors from restoring them, of course, and by now there are plenty of parts and expertise to address any issue with this roadster.

As the decade rolls on, however, we’re sure many British classics will get the EV conversion treatment, and this month it’s a double feature with the Triumph Stag and the Morgan 4/4. Both models have just been converted to electric power by British company Electrogenic—seemingly intent on bringing the automotive world depicted in Gattaca to life.

Instead of its 3.0-liter V8, the Stag gets the company’s Hyper9 electric motor, good for 107 hp and 173 lb-ft of torque. Electrogenic also keeps the car’s original four-speed gearbox instead of relying on a single-gear setup. The battery in the Stag takes the place of the engine, with the car keeping its rear-wheel-drive layout, the relatively modest 37-kWh battery giving it a range of 150 miles. The company hasn’t mentioned just what kind of acceleration is provided by the brushless electric motor, but given the fact that it still has to deal with a four-speed gearbox, there could be some variability. It’s worth noting that the 3.0-liter V8 in the Stag produced all of 145 hp and 166 lb-ft of torque, so the performance may not be vastly different, just far quieter. 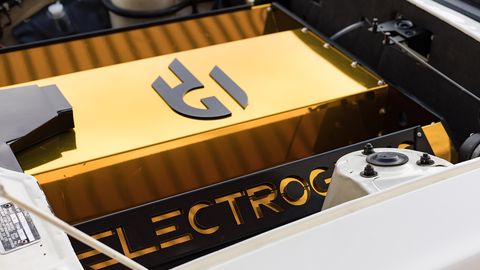 “Converting older cars like these to electric power is about using modern technology to bring out the best characteristics in the cars,” says Director and Co-Founder of Electrogenic, Steve Drummond. “For us this means increasing power within the capabilities of the original vehicle, optimizing weight distribution, and not using too many batteries to keep the handling crisp and precise. Our proprietary electronics integrate the batteries and motor into a seamless system, making the cars as safe as possible.”

“Our systems also allow us to maintain the originality of the rest of the car, which is a really important factor for us,” Drummond adds. “For example, it means that we can repurpose the original instruments to keep the interior as untouched as possible. Ultimately, what we’re always trying to do with our conversions is to make the cars we’ve been entrusted with into ‘better versions of themselves'”

The 1957 Morgan 4/4 was the second car whose conversion Electrogenic announced this month, noting that both are believed to have been the first EV conversions for their respective models. And in this case Electrogenic has ditched the four-cylinder engine, replacing it with the same high-voltage brushless electric motor good for 107 hp and 173 lb-ft of torque. A 37-kWh battery takes the place of the (smaller in the Morgan’s case) engine bay, giving the car an identical range of 150 miles on a full charge. As in the Stag, Electrogenic’s conversion keeps the original gearbox. 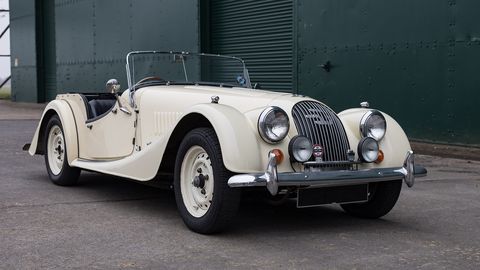 “Electrogenic’s Triumph Stag and Morgan 4/4 conversions are customer vehicles, and as such have been prepared to the customers’ specifications,” says Director and Co-Founder of Electrogenic, Ian Newstead. “Electrogenic offers a full suite of classic car electrification options for customers, and every car that is converted is unique, maintaining the beauty and engineering of the original but making the car as practical as possible for the purpose that the owner intends to use it for.”

The company isn’t saying just how much the Stag conversion costs, but it’s certainly one of those things that’s bound to get less expensive with more interest, especially now that even Aston Martin is offering EV conversions for its older models. In the future we expect that these types of conversions will be very common, especially for troublesome classics with a lot of space underhood for a battery.

Would you convert your classic car to an EV if the price was right? Let us know in the comments below.