How much range will your Tesla lose if it’s cold outside and you can’t plug it in?

This article comes to us courtesy of EVANNEX, which makes and sells aftermarket Tesla accessories. The opinions expressed therein are not necessarily our own at InsideEVs, nor have we been paid by EVANNEX to publish these articles. We find the company’s perspective as an aftermarket supplier of Tesla accessories interesting and are happy to share its content free of charge. Enjoy!

As the holiday season is nearing, cold weather is striking different parts of North America with copious amounts of ice, snow, and wind. A Tesla Model 3 owner from Saskatoon, Canada tested his car for overnight range loss in temperatures as low as -17 ℃ (1.4 ℉).

He conducted a range loss calculation outside in the snow while his Tesla wasn’t plugged into a charger. The test lasted over a 16 hour period. Note: according to our handy guide on cold weather tips for Teslas (and other electric vehicles), it’s best to keep a Tesla plugged into the home charger overnight.

Before jumping to the video, let’s catch up with some helpful indicators inside Tesla vehicles showing the current state of the vehicle’s battery temperature and corresponding affected range.

As we can see in the above screenshot, the horizontal ‘dots+line’ on the Tesla Model 3 / Model Y center touchscreen indicates how cold the battery currently is and how much regenerative braking is available right now.

Since Canada uses the metric system, the car’s range is displayed in kilometers. At the time when he parked his Model 3 in snow, the car’s screen showed 362 km of range left for a Standard Range Plus Model 3 — the display indicates approximately 85% of the battery charge remaining.

After almost 15 hours of being parked in extreme cold and snow while unplugged, the Tesla Model 3 center display shows the battery’s range dropped to 318 km. If we look closely (Fig 2 below), I have indicated a portion of the battery is showing in blue color on the screen and a snowflake icon appears on the top-left information bar.

This blue portion shows that this amount of range currently cannot be utilized right now because the battery is cold. As soon as the car runs for around 15-20 mins, this blue area on the center display disappears as the battery gets all warmed up.

The Tesla Model 3 lost 44 km (9%) of range including the cold blue inactive portion of the battery, this range loss is calculated before the battery gets heated while being driven. Excluding Sentry Mode usage, the estimated loss of range is only 5% according to the owner’s estimate.

This Model 3 owner also intelligently used the Pre-Heat Cabin function from his Tesla Mobile App to heat up the interior of his car and melt any ice on the windshield. The pre-heating used around ~8 km (1.5%) of range — not bad considering the extra comfort of doing this on your phone instead of inside a frigid car. 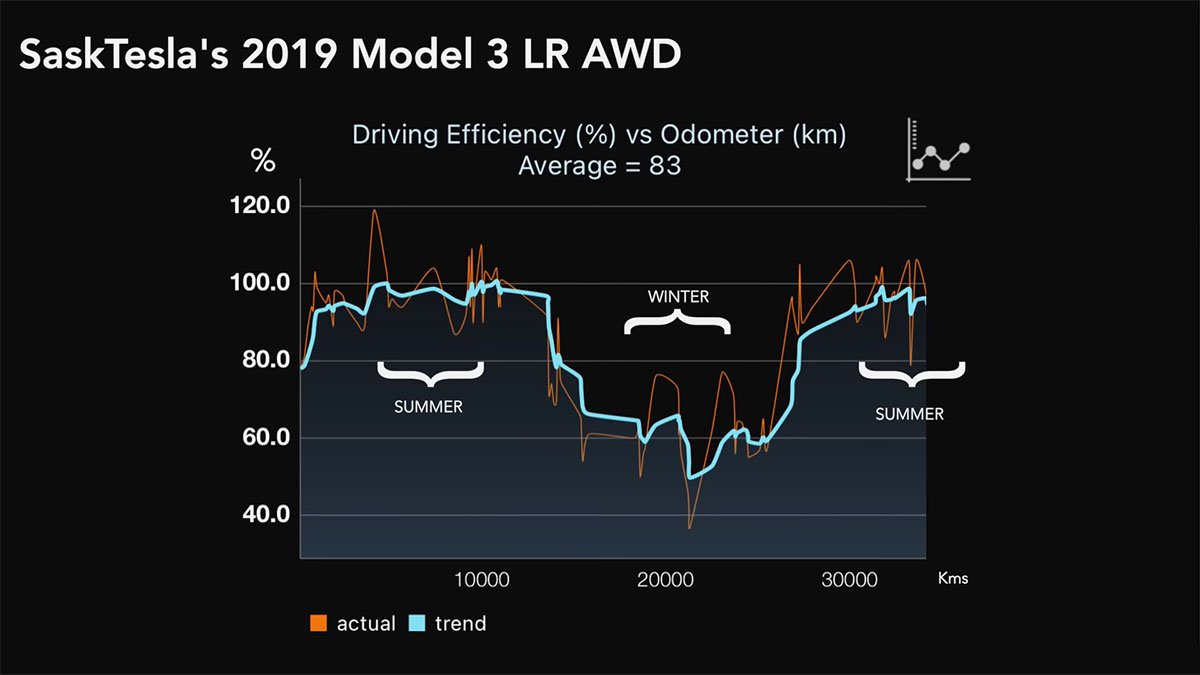 SaskTesla collected some efficiency data from his Tesla Model 3 for the Canadian Winter and Summer and he has compiled it all into the graph (see above) to showcase the trends related to average range loss in a Tesla Model 3 contingent on weather.

Written by: Iqtidar Ali. An earlier version of this article was originally published on Tesla Oracle.