Nissan will create an EV production hub in Europe at the site of its Sunderland plant in the UK, investing £1 billion into the effort that will create a manufacturing ecosystem and contribute to the automaker’s goal of achieving carbon neutrality. Dubbed EV36Zero, the hub will combine EV and battery production with renewable energy sources, with Nissan working with battery producer Envision AESC at the hub, which currently operates Europe’s first battery plant in the same area.

Envision AESC also plans to invest £450 million to build a gigafactory on the International Advanced Manufacturing Park, next to the Nissan plant, one that will be powered by renewable energy.

“The new plant will increase the cost-competitiveness of EV batteries produced in the UK, including through a new Gen5 battery cell with 30% more energy density which improves range and efficiency,” Nissan points out. “This commitment will power Nissan’s new vehicles, supporting the continued localization of vehicle parts and components with advanced technology. This will make batteries cheaper and EVs more accessible to a growing number of customers in the future.”

In addition to creating a hub for EV production in Europe, Nissan also plans to build a new electric crossover on the Alliance CMF-EV platform, planned to be exported to European markets. Nissan is investing £423 million into the vehicle, with an expected production capacity of up to 100,000 units. 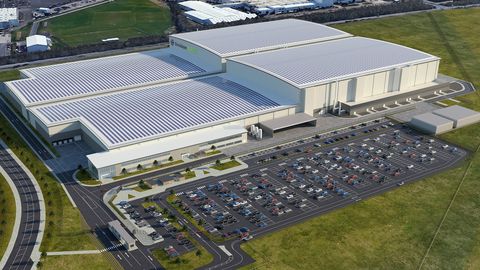 Just what that new crossover could look like was hinted by a teaser image from the automaker, showing a sleek but small crossover that could be positioned below the Ariya but above the Leaf, playing the role of a subcompact electric crossover designed to compete with battery-electric hatchbacks in Europe. The teaser image shows a vehicle with relatively large wheel arches and a long-slung cabin, as well as relatively large taillights, suggesting a smaller overall vehicle. Indeed, it does not seem like a model positioned above the Ariya, and such a model perhaps would not make much sense to European buyers, especially when it comes to pricing. On the other hand, at some point Nissan will need a model positioned above the Ariya as well, but probably not for a few years, and not for Europe.

Therefore, a smaller and lower companion model to the Ariya that still keeps some distance from the Leaf seems most likely.

The EV36Zero hub is also planned to rely on renewable energy, expanding the current footprint of Nissan’s wind and solar farms in the area in order to create a “microgrid,” while also creating a 1 megawatt energy storage facility that will use second-life car batteries, which will be able to store excess energy created in the daytime for later use. Current plans envision as many as 10 new solar farms in the Sunderland area that could be created, with an expected 132 megawatts of energy generation. Overall, the renewable energy microgrid is expected to save 55,000 tonnes of carbon each year.

“This project comes as part of Nissan’s pioneering efforts to achieve carbon neutrality throughout the entire lifecycle of our products,” said Makoto Uchida, Nissan president and CEO. “Our comprehensive approach includes not only the development and production of EVs, but also the use of on-board batteries as energy storage and their reuse for secondary purposes.

“Our announcement today comes out of lengthy discussions held within our teams, and will greatly accelerate our efforts in Europe to achieve carbon neutrality. The experience and know-how gained through the project announced today will be shared globally, enhancing Nissan’s global competitiveness.”

Nissan didn’t give a timeline for launching the crossover, but we should see it as a concept car relatively soon, perhaps later this year to coincide with the Tokyo Olympics. The production Ariya, however, will arrive on sale in the US first, in 2022.