Home » Electric Cars » Mini Plans EV Crossovers, but When Will We See Them?

Following months of reports of a planned second crossover for the Mini lineup to complement the Countryman, the marque’s trajectory appears to have solidified in favor of new EV and crossover models. The BMW-owned automaker plans to develop a new electric crossover with China’s Great Wall Motors. This model is one of several the automaker plans to launch over the next four years as Mini looks to reposition itself to a consumer market shifting away from small cars. But small cars will still be part of the mix.

“Based on a new vehicle architecture, developed from the ground up for pure e-mobility, battery-electric vehicles will be produced in China from 2023, in cooperation with the local manufacturer Great Wall Motor,” the automaker said in a statement this week. “This venture will enable Mini to meet the rising demand for emission-free driving both in China and in the other global markets. Cooperation with the Chinese partner will be based on a clearly defined principle: Production follows the market. With locally manufactured vehicles Mini will serve the growing Chinese automotive market whilst maintaining stable production at other locations.”

The automaker didn’t specify which if any of these new EVs are U.S. bound, and this won’t be the full extent of Mini’s electric plans. The automaker will also launch a long-teased sub-Cooper EV model hatchback, intended to be model positioned below (and likely replacing) the obvious placeholder that is the Mini SE. The 2011 Rocketman concept previewed what such a model could look like in what was arguably a more receptive era for subcompact hatchbacks. 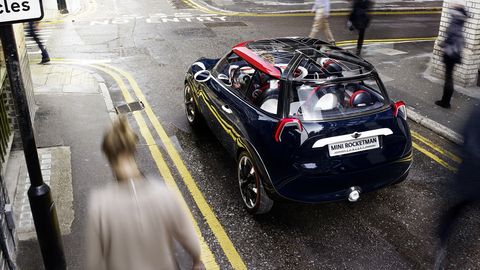 “The ongoing development of the Mini product range provides the opportunity to meet the increased demands of many customers in terms of space and versatility, with an additional model for the premium compact segment,” the automaker added. “The principle of creative use of space that is implemented in every Mini will be preserved. Irrespective of its concept, its vehicle class or drive type, every new model of the brand will continue to be a typical Mini, with a maximum of interior space, exciting drive and individuality, achieved on the smallest footprint amongst its competitors.”

Yet another EV model will land in the “small car” segment, perhaps badged as the Traveller. This is likely to be a compact MPV, likely the size of a Mercedes-Benz B-Class or the BMW X2. This model is intended to solidify Mini’s presence in what is considered a shrinking segment, but will land in a niche new to Mini, since the Clubman and the Countryman had offered distinctly different proportions and packaging.

“The successful Mini Countryman will be joined by another crossover model for the small-car segment, which will be supplied exclusively with an all-electric drive,” the automaker hinted. “In addition, the next generation of Mimi Countryman will be available with both combustion engines and an electrified drivetrain, meeting the different requirements of customers all over the world.”

If all of these new models sound like dealers will need to free up some floor space, that’s perhaps part of the plans as well. As it has been rumored earlier, the Cooper convertible and the Clubman could leave the lineup entirely given their relative sales volume, freeing up resources and attention for a more crossover-heavy menu.

If there is one piece of timing Mini did not mention it’s the basic two- and four-door gas-powered Cooper hatches, which landed in 2014. A replacement date has not been announced for them, with Mini continuously pushing forward a new generation of its basic hatches. It’s likely that a firm decision has not been made regarding the two- and four-door models, but it’s clear the UKL platform underpinning them still has some life left in it. In any case, it might not make sense to replace them in the next four years, before the planned crossovers arrive. Mini should have a better view of the demand for gas-engined hatchbacks by then.

Sign up for comments and let us know what you think of Mini’s plans.