About a month after production of the Lucid Air sedan started in Casa Grande, Arizona, Lucid plans to deliver its first customer cars on Saturday, October 30, marking an important milestone for company. The first examples scheduled to be handed over to owners are the Dream Edition Range and Dream Edition Performance models, with the former capturing headlines earlier this year for its 520-mile rating from the EPA, while the latter’s claim to fame in the EV world is its 1111-hp output. These specs, all wrapped in a large luxury sedan, should position Lucid favorably in the face of growing competition from Mercedes-Benz, Audi, Porsche, and of course Tesla.

The first delivery event will take place in California, but this will be more than just a handover of the cars and keys.

“Upon receipt of their cars, these initial customers will embark upon the inaugural Lucid Rally, hosted by members of the company’s leadership team on a route that showcases the vehicle’s standout ride, handling, and performance capabilities, before departing in their personally configured Lucid Air Dream Edition, reflecting their preference of Range or Performance models,” the automaker said.

The first 520 examples will be the Lucid Air Dream Editions, to be followed by production of the Lucid Air Grand Touring models. Pure and Touring models will follow in 2022, with the automaker indicating earlier this year that it has some 13,000 reservations at the moment for different versions of Air sedans. 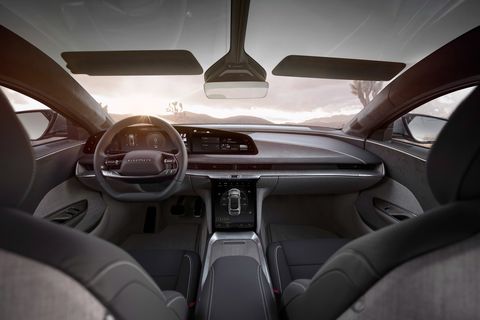 “Creating the Lucid Air has truly been a labor of love, with customer deliveries representing the culmination of years of endeavor from the entire Lucid team,” said Peter Rawlinson, CEO and CTO, Lucid Group. “So I’m truly excited to hand the keys to our first dear customers and accompany them on an inaugural drive through the iconic California countryside.”

The announcement of the delivery event coincided with Lucid providing some details on the battery packs of the two versions of the sedan. These initial Dream Edition models will feature “a special 118-kWh version” of the long-range battery pack, with 22 modules holding 6600 cells. The Dream Edition Range version of the sedan will offer a 520-mile EPA-rated range, delivering 4.4 miles per kWh. The 520-mile rating applies to Dream Edition Range models optioned with 19-inch wheels, while the same equipped with 21-inch wheels are rated at 481 miles. So there is a bit of a range penalty for sporting the spiffier wheels.

The Grand Touring, equipped with a 112-kWh battery are rated at 516 miles with the smaller wheels and 469 miles when wearing the larger wheels. So the differences in rating, if not your actual mileage, are not trivial when it comes to wheel choices. Incidentally, it’s the Grand Touring model that holds the most efficient rating out of the whole roster, offering 4.6 miles per kWh. This version will serve up 800 hp and 885 lb-ft of torque, so the milder power has some advantages, but it will still post quarter-mile times of 10.7 seconds at 127.56 mph, so it’s not all that mild in the larger sense. All three flavors of the sedan will offer a top speed of 168 mph, to keep things in check.

Lucid also indicated that the Dream Edition Performance, which is rated at 1111 hp and 1025 lb-ft of torque, will offer quarter-mile times of 9.67 seconds when optioned with the 21-inch wheel and tire pack, and will make 0-60 mph sprints in just 2.42 seconds. The Performance model, when optioned with the 19-inch wheel and tire package, will return 471 miles of range—still well above the range offered by the Tesla Model S and the Mercedes-Benz EQS—the two other longer-range luxury electric sedans. But when equipped with 21-inch wheels its range drops to 451 miles, according to the company, so there is a trade-off once again.