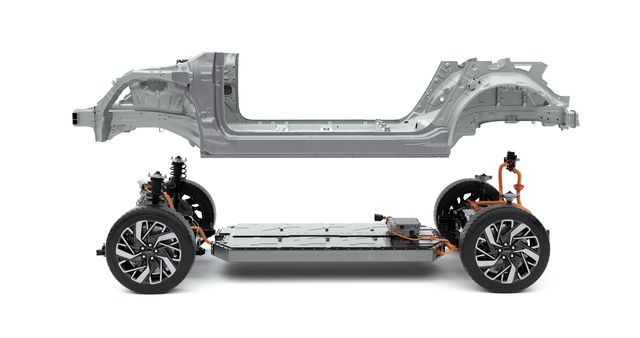 Hyundai is looking at a big future for electric vehicles, with 23 planned by 2025, most of which will ride on its new dedicated E-GMP platform that was officially revealed yesterday.

The first vehicle to sit on the new electric underpinnings will be the Hyundai ioniq 5, a crossover due out in later 2021. But the future holds performance and possibly even racing variants, Hyundai said. E-GMP will eventually carry Hyundai, Kia and even Genesis EVs and will include “powerful performance models,” according to Hyundai’s president and head of R&D Albert Biermann.

The promising new platform is modular and scalable, so it’ll fit under almost anything. By extending the battery tray and the number of liquid-cooled batteries it carries, the E-GMP platform can accommodate all manner of electric vehicles, from an all-wheel drive crossover like the ioniq 5 all the way to a rear-drive performance sedan. Indeed, apart from AWD variants, any 2WD applications of the E-GMP will send power to the rear wheels, not the fronts. 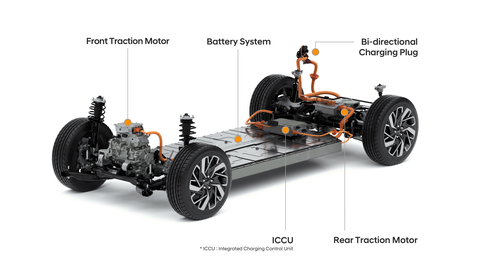 “The starting point of vehicles based on E-GMP is pretty powerful,” said Biermann, addressing the press via a Zoom conference. “This is a pretty substantial platform. The power level being already pretty high in a two-wheel drive application, this is all about precision and substantial driving performance. To deliver in all aspects of driving and performance we felt (RWD) was the right way to go, to put the motor on the rear because this can also be a lot of fun.”

Fun, in an electric car, from Hyundai? This is promising indeed. Biermann touted as much as 600 hp on an unspecified future E-GMP performance model.

The platform’s full name is Electric Global Modular Platform and it was designed from the start to accommodate only battery powered electric vehicles. From the photos you can see here, the “platform” isn’t so much a stamped-steel floorboard as it is a big battery tray slung between front and rear subframes that carry electric motors. To those subframes is attached the suspension, which we know is a five-link in the rear.

Welded on that battery tray with attached subframes is the more traditional looking stamped-and-spot-welded steel body structure. The platform photos released yesterday are more just the electric drivetrain and battery tray. But with a little resizing, that tray and those front and rear subframes will fit onto all kinds of electric Hyundais, Kias and whatever the plural of Genesis is. Hyundai will continue to offer BEVs based on derivative platforms, basically converted gasoline-powered vehicles, but the E-GMP represents the future.

“Today our front-wheel driven Hyundai and Kia BEVs are already among the most efficient ones in their segments,” said Biermann. “With our rear-wheel driven based E-GMP, we are extending our technological leadership into segments where customers demand excellent driving dynamics and outstanding efficiency.”

Specifically, Biermann promised a high-performance model that can do 0-60 in less than 3.5 seconds and hit a top speed of 161 mph. Range has been listed at 310 miles, though that is not on our U.S. Federal EPA driving cycle.

Biermann even spoke briefly about joining ETCR, Electric Touring Car Racing, a series that was supposed to have had demo races already this year but, well, this year was a little weird for everyone. Nonetheless…

Does all this sound a little like that time Dany Bahar took over Lotus and promised us the moon in carbon fiber? Or the time our friend Victor Muller bought Saab and we all hoped there’d be that Subaru-based revival of the Saab 92? No, this is Hyundai, one of the world’s biggest automakers. If the future really is electric, then Hyundai has simply gotten ahead of the bandwagon, with a promising new platform and high hopes from us for that 600-hp performance car. Let’s look forward to a bright, buzzing, electric future. And 600 hp.