This week Volkswagen is giving the world a preview of its robotaxi tech in the city that will be the first to host the company’s autonomous ride-pooling service. Revealed in prototype form for the first time last month at the IAA in Munich, the robotaxi version of the ID. Buzz was developed in a partnership with Argo AI, and will be a part of a ride-pooling program in Hamburg operated by Volkswagen’s MOIA unit focused on mobility tech and services.

Hamburg is set to host the Level 4 passenger vans starting in 2025. VW and MOIA are already testing the prototypes at a number of sites in Germany, and the ITS World Congress in Hamburg, dedicated to smart mobility tech, is the latest peek of how VW sees transportation evolving in the coming years.

While our previous glimpses of the ID. Buzz have focused on the autonomous tech, relatively less attention has been paid to Volkswagen’s mobility arm, launched in 2016. In these short five years, MOIA has already launched Europe’s largest all-EV ride-pooling fleet, transporting millions of passengers in that time. And as a part of Hamburg’s planned launch of an autonomous ride-pooling service, MOIA is the third major component of this effort.

At the moment ride-pooling is not a well-known term in the US, even though there is no shortage of ride-hailing apps. Ride-pooling, on the other hand, combines the concepts of a shared taxi service with an app-based ride-hailing service, with passengers requesting to be picked up by a passenger van with others traveling in the same direction.

In MOIA’s case, its current fleet of electric vans can carry up to five passengers, who can request rides via an app, and then be picked up in a convenient location based on the destination they desire. The concept can be looked upon as an app-based and algorithm-driven update of a decades-old European idea of route taxis. 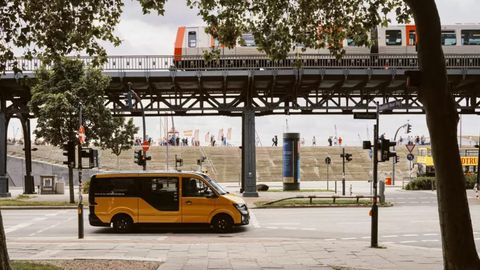 “For MOIA as a mobility service and fleet operator, autonomous driving vehicles are an important element of our business model,” says MOIA CEO Robert Henrich. “Cities all over the world are seeking to make their transport systems more efficient and environmentally friendly. Autonomous ride-pooling could improve urban mobility and enhance road safety, thereby making cities better places to live.”

The next step in this evolution is making the ride-pooling service autonomous. The automaker, along with Argo AI and MOIA, will be testing the Level 4 prototypes on the streets of Hamburg starting this year. Argo AI has begun 3D mapping of the streets in the test area of Hamburg, using mapping vehicles to create a very detailed representation of the streets. After mapping is completed, VW, Argo, and MOIA will conduct test drives with and without passengers.

“The main criterion was to develop autonomous ride-pooling under real conditions where it can have the greatest impact,” MOIA says about its Hamburg project. “The districts of Winterhude, Uhlenhorst, and Hohenfelde offer ideal conditions for this: They have complex road conditions with many traffic challenges. At the same time, autonomous ride-pooling can have a traffic-relieving effect by supplementing local public transport here. In addition, the area is close to the MOIA hub in Wandsbek, where the AD test fleet will be stationed.”

Other types of tech and sensors will be needed on board to make ride-pooling work autonomously, besides the sensor and computing power needed for Level 4 autonomy. 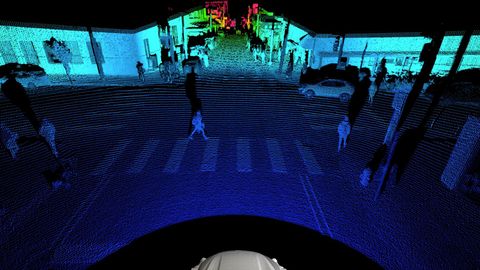 For starters, interior sensors will need to detect that the right person is boarding the autonomous van. The sensors also need to be able to count the number of people inside, and make sure that everyone’s luggage is safely stowed and that everyone is sitting in their seats. The autonomous vans will need to perform all of these tasks that are currently performed by human drivers, and developing all this tech will also take time, which is why MOIA and VW plan to launch the service about three years from now. So developing all of these interior sensors and getting them to work reliably is not much easier than making an electric van steer itself on 3D-mapped roads.

Speaking of electric vans, the Level 4 versions of the ID. Buzz feature six Lidar sensors, 14 cameras, and 11 radar sensors, a number of them contained in a large roof-mounted sensor pod. The variety and number of sensors used by the prototypes allows the system to paint a remarkably complex picture of its surroundings, capable of detecting objects as far as 1300 feet away from the vehicle, with Geiger-mode technology allowing the sensors to pick up even a single photon of light. While this number of sensors may seem like overkill, especially given how other automakers are approaching semi-autonomous features, Argo’s philosophy dictates using as many sensors as possible in the quest for safety and reliability.

“Operating on public roads is a privilege we take very seriously at Argo,” said Reinhard Stolle, vice president of Argo Munich. “Safety remains our top priority in how we develop and test our self-driving system, and we remain committed to autonomous driving technology that improves the way we get around cities—not just for people riding in our vehicles, but for everyone who shares the road.”

One issue that VW isn’t talking in detail about for now are the hardware costs of just one such van. While the price of radar, Lidar, and cameras has certainly dropped over the past decade, with significant gains achieved in miniaturizing Lidar technology, these ride-pooling vans will also need almost as many sensors inside to monitor the passengers to ensure safe operation. VW has to account for the costs of the electric vans, the costs of the autonomous hardware and software, the costs of the interior sensors to carry out the tasks of the driver, and the costs of recharging the vans at their home base. And while automation will certainly eliminate the job of the driver, there are still jobs that humans will need to do to service the vans on a daily basis (though VW is already working on replacing even some of those jobs with robots, having unveiling concepts of charging robots that could handle charging plugs and cords).

If all of this sounds fantastically expensive even without considering the R&D costs of getting there, that’s because it very well could be, all with the goal of replacing human drivers that currently operate vans for MOIA.

One other goal is a little less obvious at first blush, and it involves making car ownership in cities less of a burden for urbanites.

“Over 50% of households in Hamburg own at least one car and 1 in 10 households own two or more. To halt this persistent trend, mobility offerings such as MOIA are required that can offer an attractive and convenient alternative to the private car,” VW’s mobility unit says. “Indeed many car drivers are using MOIA already, and often in combination with public transport. The scenarios offered by the researchers show that this figure may multiply in future and under the correct conditions could even lead to a situation in which the majority of Hamburg’s residents no longer have a car of their own at all.”

Still, VW’s vision of an autonomous future appears to be more easily achieved in European cities for now, rather than North American ones. This doesn’t mean we won’t see autonomous tech in privately owned versions of the ID. Buzz, as the automaker has made it a goal to offer higher levels of autonomy in its privately owned vehicles in the coming years.