Decades from now perhaps it will be difficult to believe that 2020, defined by the tremendous losses and stresses of the pandemic, was the pivotal year for Volkswagen’s launch of its ID-branded electric vehicles. But even now, before the year is out, the automaker is reporting encouraging progress in its rollout of a new wave of battery electric models.

At its annual general meeting, the automaker acknowledged the challenges it has faced over the course of this year, while noting the positive start of its MEB platform family, amid an upward trend expected to continues through the last remaining months of 2020.

“In both 2019 and 2020, we took significant steps towards becoming a leading provider of electric, digital mobility, achieving important milestones,” Group CEO Herbert Diess said at the virtual Annual General Meeting of Volkswagen Aktiengesellschaft. “The transformation of the Group is not being held back by corona, but accelerated by it.”

Just a few weeks ago Volkswagen began production of the ID.3 electric hatch and the ID.4 electric SUV, with the latter headed to the U.S. for deliveries in the winter. The automaker noted that it received over 30,000 orders for the ID.3 hatch during the course of this year, despite the challenges for European customers during the first half of the year associated with the pandemic.

Still, it’s not just the Volkswagen brand that will benefit from electrification over the next few years; Porsche is in the process of rolling out EVs of its own.

“The brand has adopted by far the most ambitious electrification strategy of all the brands. Porsche estimates that by 2025 at the latest over half of all new Porsches will be electrified, in other words powered solely by batteries or as plug-in hybrids,” Diess added.

Diess also noted the rollout of electric models at other Volkswagen Group Brands, ones that we’re not used to hearing about. Celebrating its 125th anniversary this year, Škoda revealed its first battery-electric model earlier this year, using the MEB platform to create an SUV called the Enyaq.

Yet another Volkswagen Group brand, Spain’s SEAT and its Cupra sub-brand, will benefit from Zwickau’s MEB platform as well as Diess noted. The Spanish division was the first to reveal an ID.3-based electric hatchback all the way back in March of 2019, in the form of the el-Born, named for one of Barcelona’s famous neighborhoods. 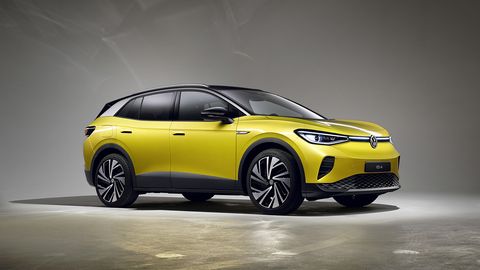 One major shift that’s taking place at the moment that concerns the group’s Spanish division is that Cupra, a sub-brand that emerged from a popular line of hatchbacks built by SEAT, is now poised to upstage SEAT itself. Diess hinted as much during the meeting, foreshadowing a greater future role by the performance sub-brand, which is sure to cause plenty of talk about the increased prominence of the Cupra sub-brand and its position in Wolfsburg’s MEB plans. Perhaps it wasn’t a coincidence that the el-Born was revealed first among the MEB hatches, and that it has since gained a Cupra badge in place of the SEAT badge it wore in concept form in Geneva in 2019.

“SEAT stands for exciting products and is increasingly venturing into higher price segments with Cupra,” Diess said during the meeting. “Cupra will become an electric and electrifying automotive brand that captivates with exciting designs, the latest technology, and a modern, urban appearance. The electrification of Cupra is starting with the Cupra Leon as a plug-in hybrid and the all-electric el-Born, which will be launched next year.”

Still, Volkswagen noted that it faced significant challenges in 2020 that were caused by the pandemic. The automaker reported that deliveries of new cars by the group were down by 21.5% compared to 2019 — understandable given the disruptions of the pandemic — but nevertheless recorded a market share growth of 0.4%, reaching 13% of all global car sales. Business in Western Europe was hit especially hard by the pandemic, which saw a 30.9% drop. However, the automaker noted a rebound as it neared the fourth quarter of 2020, and now expects incoming orders and deliveries in September to land above those for the same month in 2019.

Despite this bit of good news, Wolfsburg remains cautious about the near-term course of business.

“All medium- and long-term forecasts continue to involve considerable uncertainty and depend on the future course of the pandemic,” Diess pointed out.