How many Rimacs have you actually seen on city streets since the company was founded 12 years ago? There are supposed to have been “a handful of deliveries” of the Nevera (formerly the C_Two) out there somewhere, but apart from a lot of testing and prototypes, the number of Rimacs in customer garages could be counted on one hand, maybe two.

This hasn’t deterred major automakers from clambering over each other to invest in the company to get access to its EV technology. And there are a lot of owners. The Rimac Group itself is owned by Porsche (24%), Hyundai (12%), founder Mate Rimac (37%) and other investors that own the remaining 27%. The Rimac Group is divided into Rimac Technology, which is owned 100% by the Rimac Group, and the new Bugatti Rimac. Of Bugatti Rimac, the Rimac Group owns 55% while Porsche owns 45%. 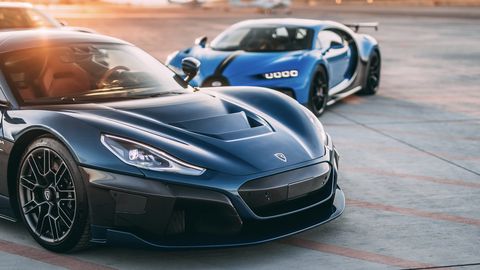 On the surface, today’s announcement means the new company, Bugatti Rimac, will be controlled 55 percent by Rimac, with Rimac founder Mate Rimac as CEO, and that Bugatti will control 45 percent. But remember that Porsche, which is owned by Volkswagen, and which also owns Bugatti, already had 24 percent of the Rimac Group, and now with 45 percent announced today owns 64 percent. Porsche chairman Oliver Blume and deputy chairman Lutz Meschke will both serve as supervisory board members at the new joint venture. So is this really an announcement that Porsche is now in charge of Rimac? Calls to Bugatti and Porsche for clarification have not been returned yet.

Whatever the case may be, the bigger news may be that the world is turning electric. As it does so, carmakers are looking for reassurance that they can actually make something electric that will go down the road. The number of all-electric carmakers right now is slim. In the U.S. it’s Tesla (Lucid, Rivian, etc. have not sold any cars yet). In Europe it’s Rimac, even though Rimac hasn’t done much beyond R&D so far. The future of hypercars will certainly be electric at some point. To get to that point, carmakers are scrambling to build alliances that will see that transition work better.