Munich took the wraps off the long-awaited EV sedan this week, revealing what is effectively an electric version of the 4-Series Gran Coupe. Destined for comparison with the Tesla Model 3 at every turn, BMW’s EV promises a range of up to 300 miles in the EPA estimate and up to 530 hp in top spec, and will be offered in a number of flavors including an M Performance variant.

In that latter form, BMW says that the i4 will be able to launch itself from 0 to 60 mph in about 4 seconds, so throw out any notions that this will be a riff on the funky-styled i3. BMW is getting serious about electrification, and with the i4 hitting dealers later this year, the automaker is diving into the deep end of the EV pool just as electric vehicle sales in Europe explode.

This week’s reveal of the i4 is mostly about exterior design; BMW hasn’t yet unveiled the interior, preferring to tease EV buyers and BMW enthusiasts alike. And BMW’s latest design trends are on full display here, including the vertical kidney grille and a fastback roof profile, aligning with the proportions of a 4-Series Gran Coupe. A few obligatory stylistic touches that communicate “electricity” can be found, especially blue accents and aerodynamic, five-spoke wheels. 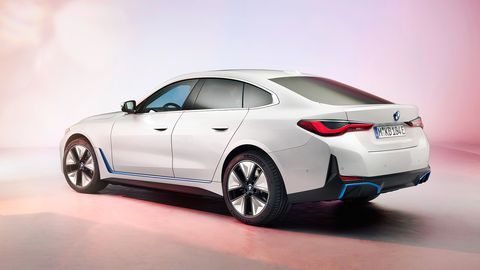 BMW hasn’t shown the interior of the i4 just yet, but we’ve already received a preview of what it could look thanks to the Concept i4, including a large infotainment screen, a free-sitting digital dash, and materials in muted, earthy tones. The i4 will also feature the latest iDrive 8 infotainment system.

“With its sporty looks, best in class driving dynamics and zero local emissions, the BMW i4 is a true BMW. It makes the heart of the BMW brand now beat fully electric,” said Pieter Nota, member of the board of management of BMW AG responsible for customer, brands, sales. 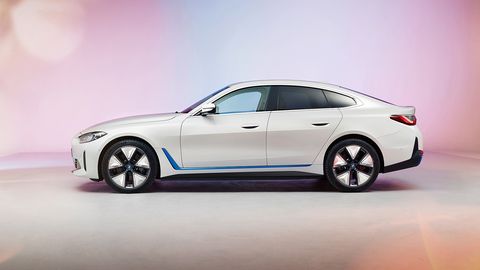 BMW promises to share more details about the i4 in the coming weeks ahead of the start of European sales later this year, including the price ladder and range variants.

There were some fears earlier that the i4 could pass us by entirely, like the i3X, which isn’t coming here, but a BMW spokesperson assures us it will arrive in the US in “early 2022.” And BMW’s US website currently suggests the same. Of course, these plans could easily change, so we won’t count this as a done deal until the first i4s are on ships headed for our shores.

How much could the i4 cost when it lands here?

There are some indications that the base version could start around $50,000 prior to any incentives, making it a bit dearer than the omnipresent Model 3, with the M Performance variant sitting well north of that figure. Prospective EV buyers surely understand that any car wearing the roundel comes at a premium.

Will the i4 be able to steal many Tesla Model 3 sales if it’s offered here? Let us know in the comments below.