If you grew up playing the first Gran Turismo or early polygonal games like Battlezone, or even just like the low-polygon-count aesthetic, there’s a car for you. Of course, it’s not a mass-produced machine. It’s the limited-production United Nude Lo-Res, and it’s for sale.

This wild machine was designed and built for an unlikely customer: United Nude. If you’re unfamiliar with United Nude, it’s a shoe company. Bring a Trailer notes that this Lo-Res carries chassis number 3, which means that there could be other chassis out in the wild. That said, this Lo-Res recently spent some time in the famed Petersen museum and displayed as part of the Disruptors exhibit, which featured a handful of alternative approaches to transportation.

Now, calling the Lo-Res a car might be a stretch. This is more of a mobile art piece, and its lack of registration or traditional vehicle title reflects that. That said, it does move under its own power. The Lo-Res sports a 5-kilowatt electric motor that feeds the rear wheels by way of single-speed transmission. While you can drive this thing, you’ll likely be sequestered to private grounds. The folks at United Nude say that this angular machine maxes out at 31 mph. 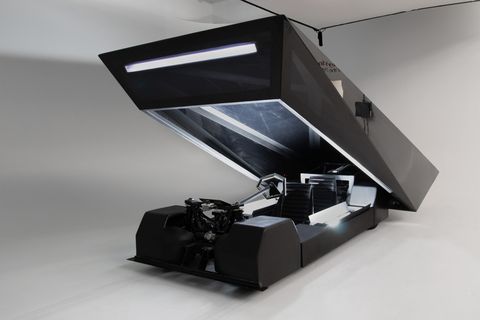 As for how you enter the Lo-Res? The team took a note right out of the NHRA’s funny car playbook. The entire body lifts to expose the two seats. The angular panels above the Lo Res’s belt line are translucent and allow the driver to have some idea of where they’re going.

If you’re wondering why anyone would make something like this or want to add it to a collection, the Petersen Museum’s chief historian Leslie Kendall explains, “You have to try everything once, and sometimes breaking something down to its most elemental features is a way of getting to the heart of a design.

“We’ve seen some pretty interesting cars as art,” he says. “Cars can be the subject of art: You can paint a car, or take a picture of a car. A car can be the medium for art: You can paint on a car like the BMW art cars. Or, a car can be a sculpture in and of itself. The reality is that cars have been treated like a sculpture for a really long time.”

Kendall also points out that this isn’t the first time someone has designed a car with a non-traditional shape. He points to cars like the Quasar Unipower, which is a car built out of a cube, and cars shaped like spheres.

That said, the Lo-Res is currently hovering around $45,000. That’s not a small chunk of change for a mobile art piece. Of course, can you really put a price on art? Yes, you can, and Bring a Trailer will when the auction closes in a couple days. Head over to BaT if you want to see more of this wacky machine.

Would you ever add anything like this to your collection? Tell as about it in the comments below.