It’s still a little difficult to process the fact that the R107-generation Mercedes-Benz SL roadster turned 50 this year. That’s right: the R107 debuted in the spring of 1971 and stayed in production all the way though 1989—almost into the age of email—making it one of the longest-running Mercedes-Benz designs of the post-war era. There aren’t many other 50-year-old designs on the road similarly treated with a shrug—we’re just so used to the sight of these cars. And for most of its time it was pretty much the only roadster or convertible you could get from Mercedes, which is another aspect of its tenure that is difficult to fully appreciate today.

Of course, the U.S. did not receive the “expanded universe” of SL varieties, so models like the 280 SL, 300 SL, and 420 SL stayed out of the U.S. market, as did the 500 SL unless you imported one privately, back when you could actually do that. This means the top version of the R107 the U.S. officially received was badged 560 SL, as the car here.

One of the nice things about this era of Mercedes cars is that quite frequently (but not always) the badges actually denoted the engine’s displacement—imagine that—so our 560 SL here really does feature a 5.6-liter V8 engine. But the 560 SL arrived toward the tail end of the model’s run, carrying it from 1986 through 1989, and serving up 227 hp and 287 lb-ft of torque. Prior to its arrival, one could get a 4.5-liter V8 in the deceptively badged 350 SL, or the very honestly badged 450 SL. That’s correct: For a while, Mercedes offered a 4.5-liter V8 in the stateside SL but badged it as a 350. You couldn’t really complain since you were getting a beefier engine at the end of the day. 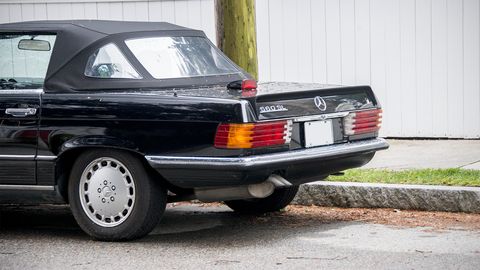 The most impressive part of the R107’s tenure is perhaps the fact that by the late 1980s the car still looked fresh, and wasn’t too visibly dated or tied to a specific era in car design. By this time there were plenty of boxier Mercedes cars on the road including the W201 C-Class and the W124 E-Class, but a few subtle tweaks to the design of the R107 prevented it from seeming stuck in the late 1960s, which is when the car was designed. It also helped that the W126 S-Class of the 1980s had very similar taillights.

The North American-market R107 might still look odd to visitors from Europe (if not to us), due to our peculiar quad sealed-beam setup as well as far more generous bumpers. The flip side is that 50 years later the U.S. still has more R107s than any other country, which is an easy-enough feat given the fact that so many were sold here. 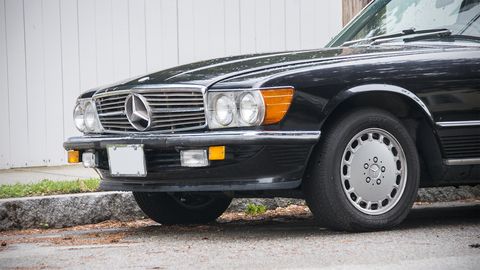 Are we living in the tail end of affordable R107 roadsters?

The top examples, however—especially of the gray-market 500 SLs of the day—can certainly test a few wallets. The Pagoda cars have dominated the top auctions and concours events for the past decade and a half and are now all out of easy reach, scooped up for restorations. The same is not true for the R107 quite yet at least when it comes to concours-grade restorations, but we’ve seen plenty of R107s get a quick splash of paint and some new upholstery. In time, the best examples will start to get the attention they deserve from collectors and restorers.

What Mercedes models from the 1970s do you think will surge in value in the coming years? Let us know in the comments below.