Contrary to what you may be reading on the interwebs, the entire state of California is not on fire, although most of it feels that way. And I admit that, for my part, I have spent the last week on the floor near the air conditioning duct slurping cool air and begging for winter. But those hardy souls in the Ferrari Club of America Southwest Region fearlessly took on the heat last Sunday for their regular monthly drive.

Now, I am no meteorologist, but I do have an Indoor/Outdoor thermometer from Smith Hardware and on the day of the Club’s drive that thermometer read 120 degrees. That was in the shade on the north side of the house. Heat records were being broken all up and down the state. And yes, most of the state was on fire.

But not the entire state, not the part where the Ferrari drive was scheduled (at least not that Sunday, the next day they shut down all the National Forests in California).

I don’t have a Ferrari and my Lancia still needs someone (me) to finish the brakes, but I briefly considered following the club’s drive route on my Suzuki V-Strom 1050 XT press bike. I say briefly because as soon as I stuck a toe outside into the coke-smelting blast furnace that is Southern California I immediately said something like, “The heck with that idea” and went back to the fetal position near the air vent in the living room.

And yet, the Ferrari Club pressed on. 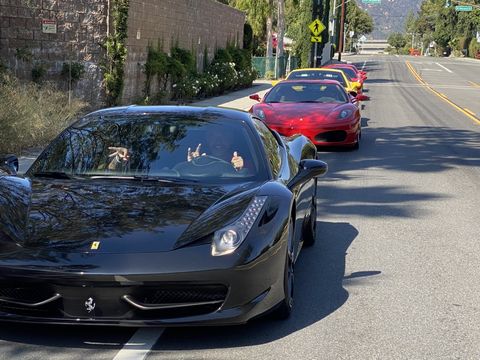 “The funny thing was, we were all expecting horrible traffic, which is okay, because it keeps everyone really driving safely, but because of the heat, there was virtually no one on the road yesterday.”

Seems most of the SoCal mountain-road-regulars felt the same way I did. Which made it all the better for the Ferraris. They took a pretty good route, too, one I’ve done a few zillion times myself: Angeles Crest Highway to Angeles Forest Highway to Upper Big Tujunga Canyon Road, back to Angeles Crest and up to Newcomb’s Ranch near the crest of the San Gabriel Mountains, a total of 65 miles of some of the best roads in Southern California.

“So there was a bonus for the 22 cars that actually didn’t think their cars would melt and they showed up.”

“The five yellow cars were like a bonus,” Bindman said. “They all kind of stuck together so it was really visually kind of cool.”

They all got out up at Newcomb’s Ranch, stretched a little, socialized behind masks for a half hour, then got back in and drove home. And the heat wasn’t even that bad after all.

“When we left at 10:00 a.m., it was only about 90 degrees in La Canada so it wasn’t this horrific heat that we all thought we were going to experience. And then when we got up to Newcomb’s Ranch and hung out for a half hour, I don’t know what the elevation is up there (it’s 5,340 feet), it was hot, but I don’t think it was anywhere near 100. So, the people who were paranoid, we didn’t really realize the kind of heat that we were prepared for. So even though it was a record day yesterday, we didn’t feel like we were in the in the middle of the record heat spell on our 90-minute driving event. So yeah, it all worked out fine.”

A lot of enthusiasts put their cars away in the winter. In Southern California a lot of them keep their cars in the garage in the heat of summer. Which makes it all the better to see the true tifosi who go out in all kinds of weather and stretch out their enjoyment of these beautiful cars that we all love, and which some of us are lucky enough to own. You only have a few years here on Driving Planet Earth, from the time you get your license at 16 till the time they take it away from you at about 103, and if you’re lucky enough to have a cool car of any kind, you really have to get out and enjoy it.

I think I’ll suck it up and go out riding. And maybe even finish the brakes on the Lancia. I hope to see you out there.