These days, if you want a race car to go fast, you let wind tunnel results and racing regulations shape its carbon-fiber panels. In the 1950s, you had a team of Italian coachbuilders laboriously hand-form sheets of lightweight aluminum into shapes that didn’t just cheat the wind, but also looked right at home in an art museum. Such is the case with the 1955 Maserati A6G/2000 Berlinetta Zagato that’s headed to auction at RM Sotheby’s Villa Erba sale this weekend in conjunction with the Villa d’Este concours near Lake Como, Italy. 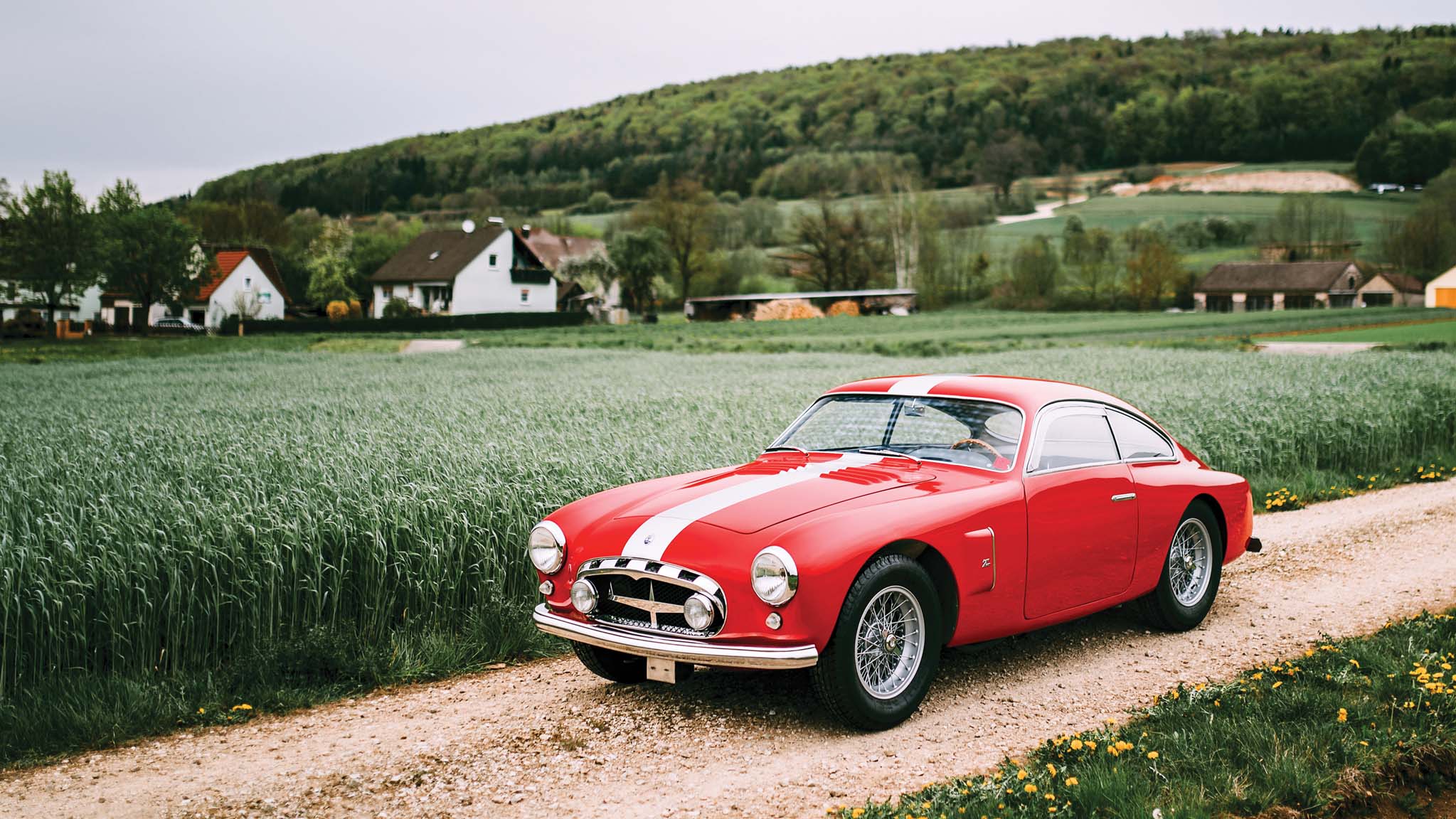 The Maserati AG6/2000 was an evolution of Maserati’s first production car for the street, the A6 1500. Whereas the A6 1500 used a 1.5-liter, single-overhead-cam straight-six, the AG6/2000’s engine was both bored and stroked to 2.0 liters and given three carburetors instead of its successor’s single Weber. Power was up to 100 horsepower and leaf springs replaced the coils found on earlier cars. Top speed was more than 110 mph and impressive for its engine class in its day.

The particular Maserati A6G/2000 on offer, chassis #2102, is just the second example bodied by Zagato and the first coupe to built on the new Maserati underpinnings. The chassis was delivered to Zagato in December of 1954 and records show the car was completed in March of the following year. After internal testing with Maserati, it’s first race was at the Rallye of Sestriere in early 1956, but after winning the first stage and placing in the second, gearbox trouble forced a resignation. Later that year, it would serve as a practice car for the Mille Miglia race duo of race driver Stirling Moss and navigator-journalist Denis Jenkinson, the later concluding that it was an altogether faster and easier driving race car than the Mercedes-Benz 300 SLR they had famously piloted to victory the year before. The car was driven to a lackluster 117th overall finish by an Italian team in the Mille Miglia that year. After storing the car for some time, then freshening it with new paint and air ducts in the front fenders, Maserati sold the car to its first private owner in 1959 and a few short years later, the Maserati made it way to the U.S., then Japan, England, and Germany. Two restorations occurred over this time, one of which gave the car an entirely new body save for the roof, as the existing coachwork was deemed too needy to repair—not uncommon of a car that was built to race. 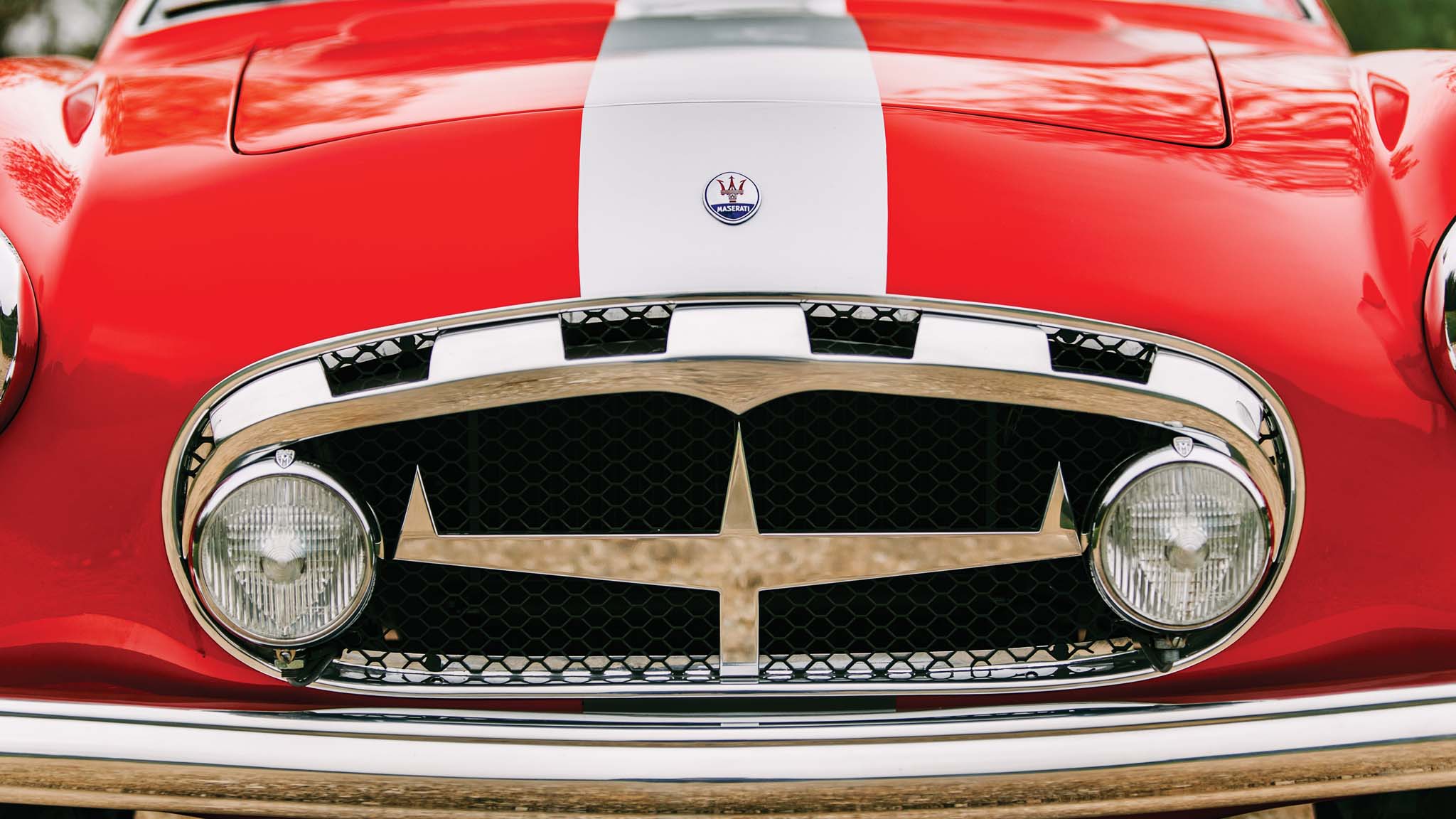 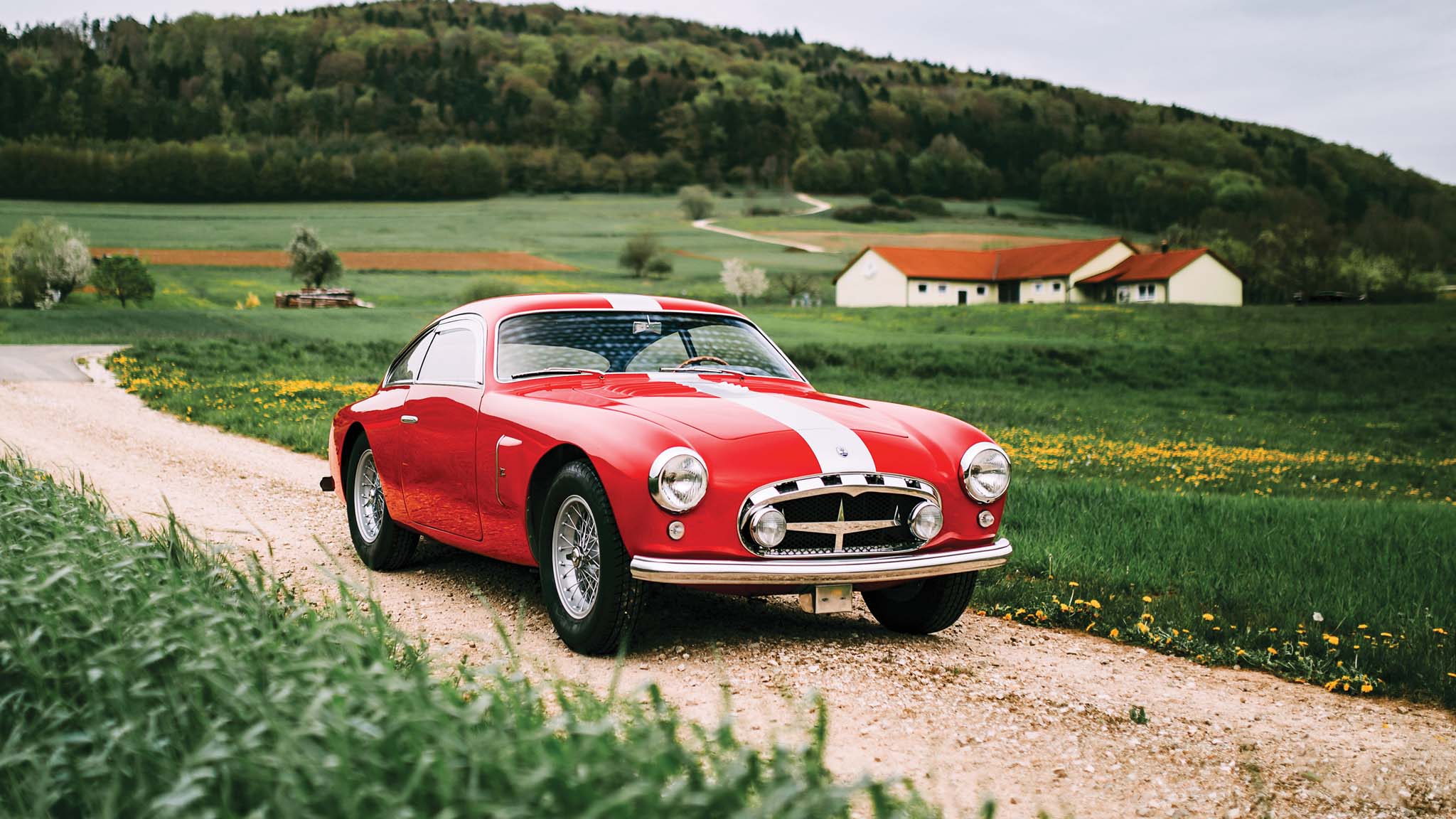 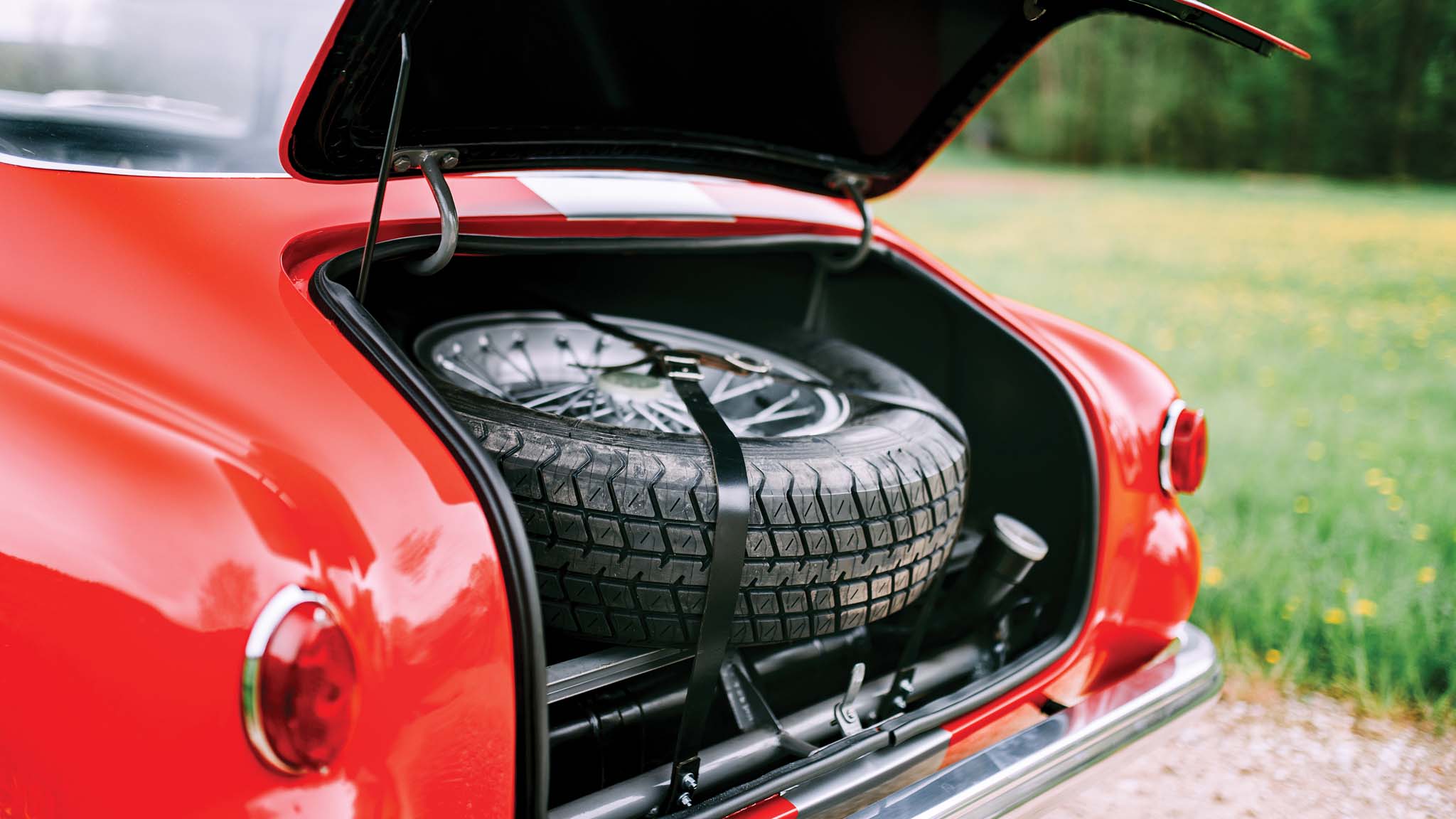 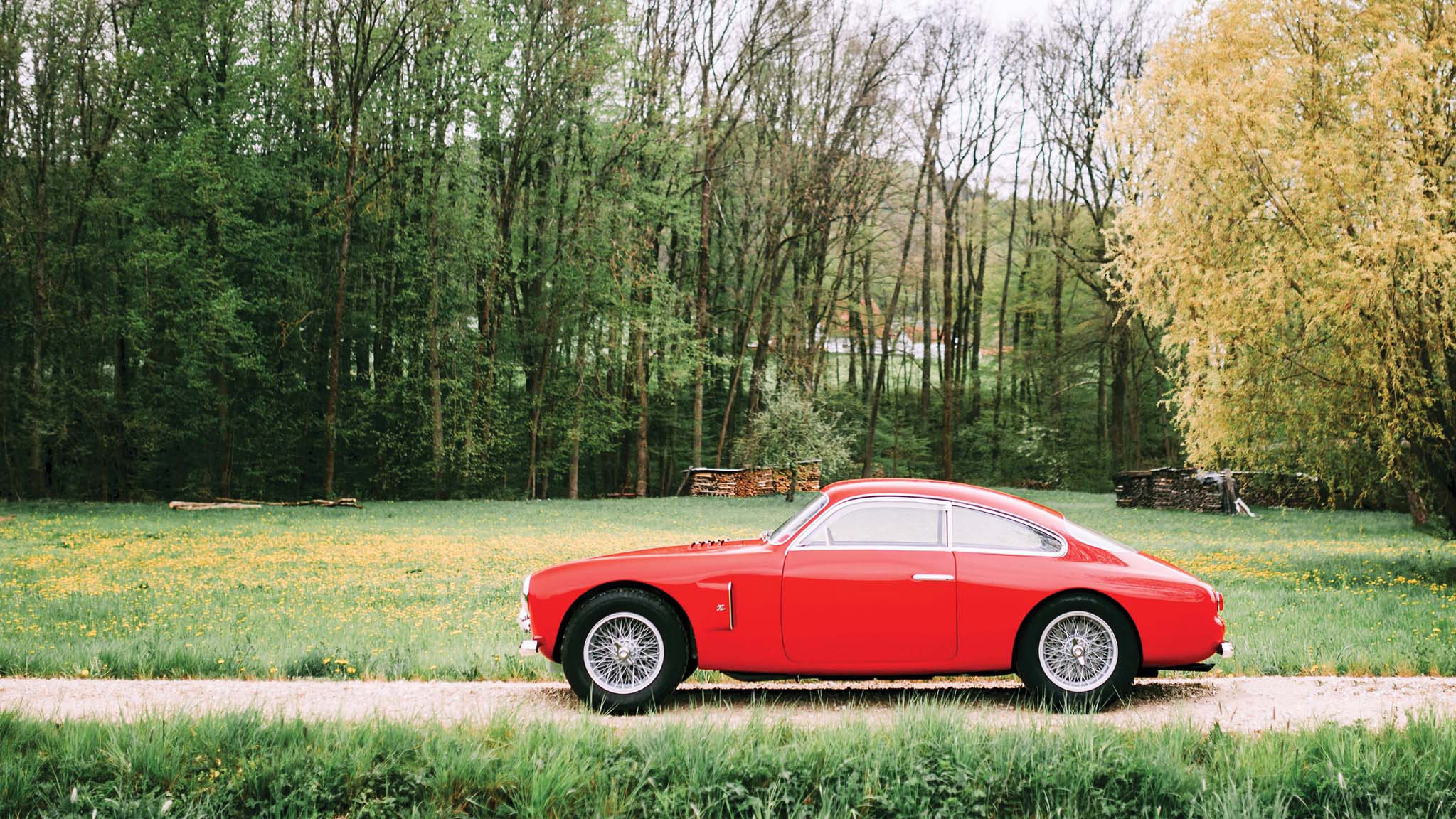 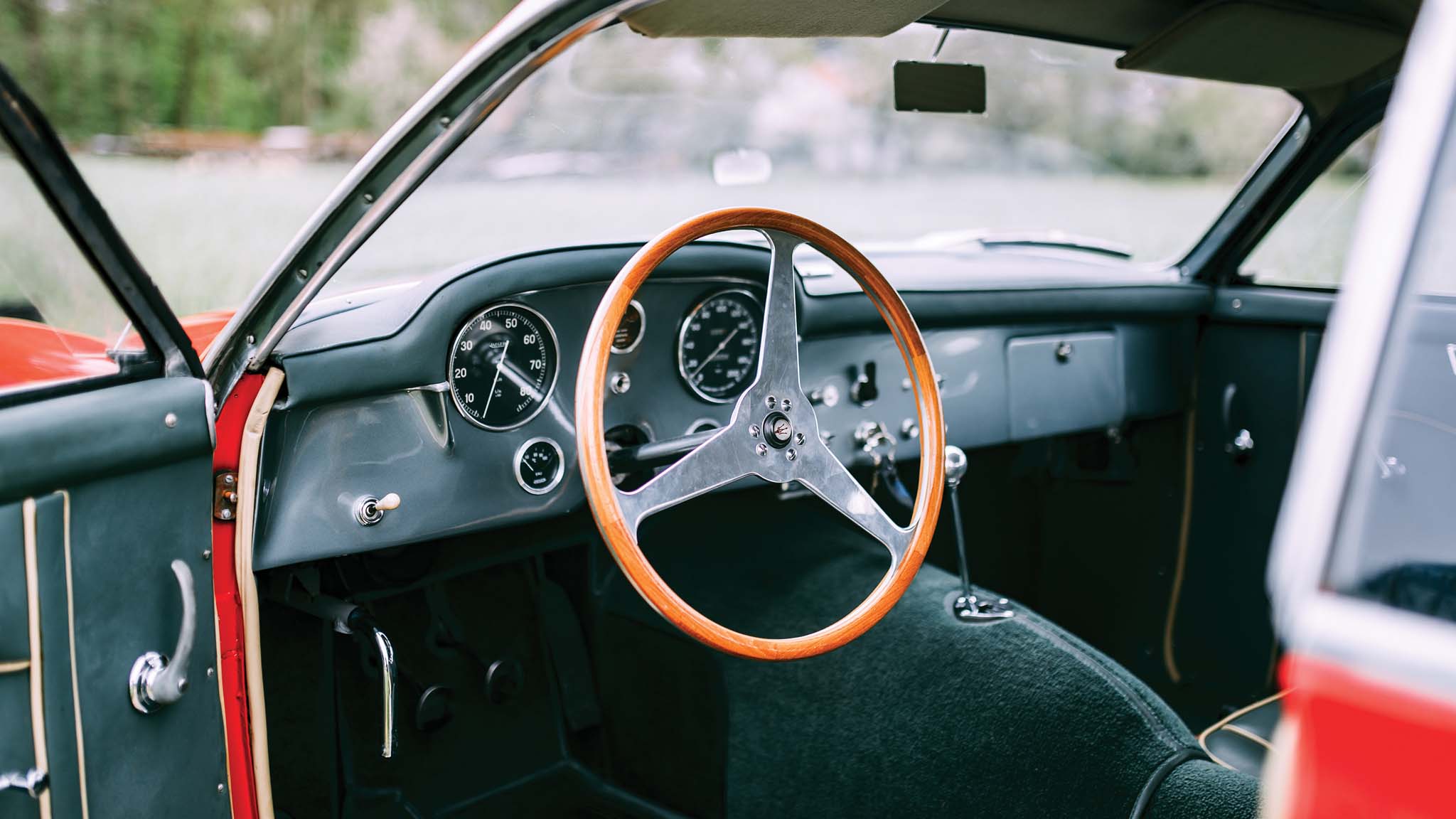 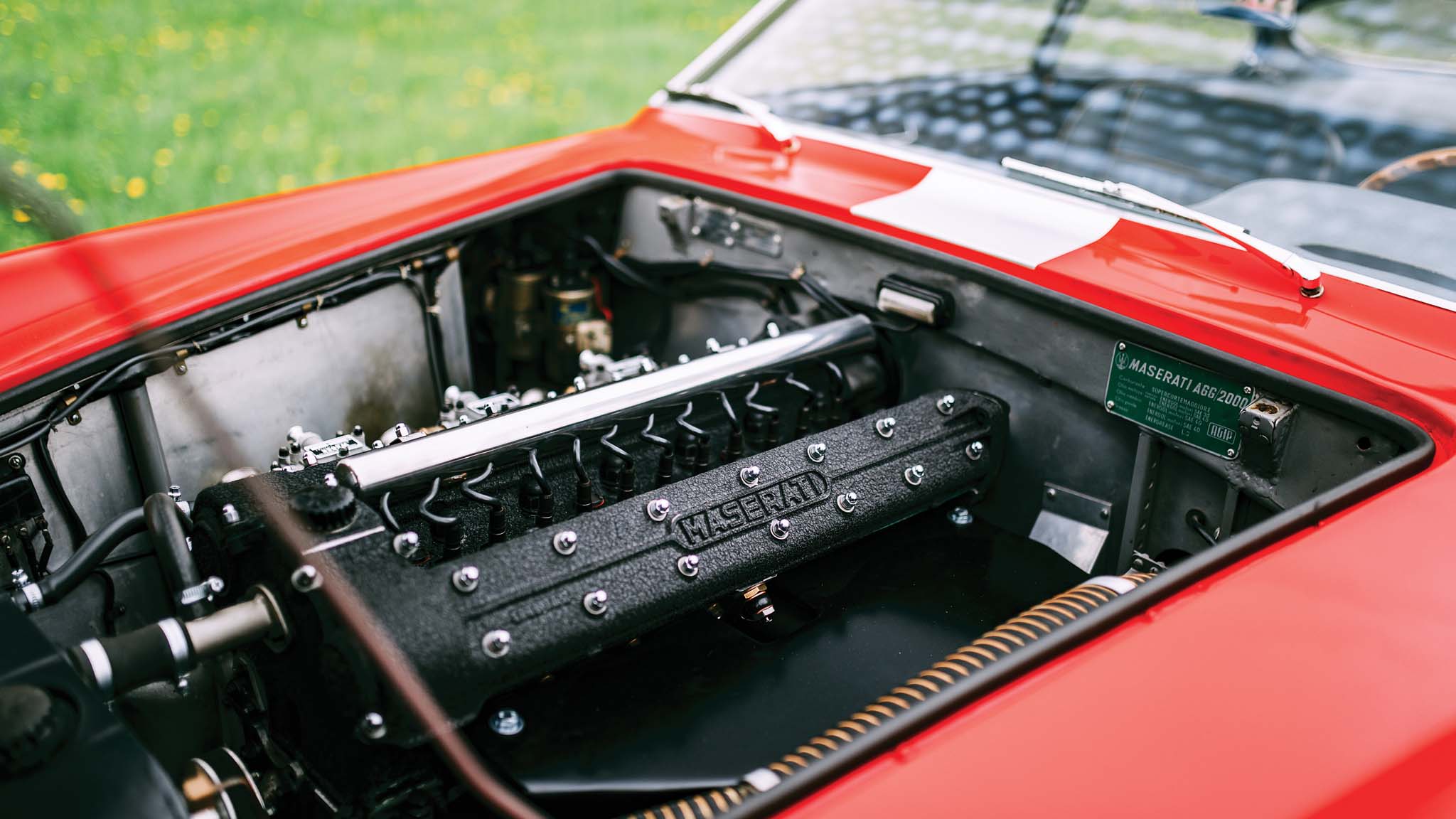 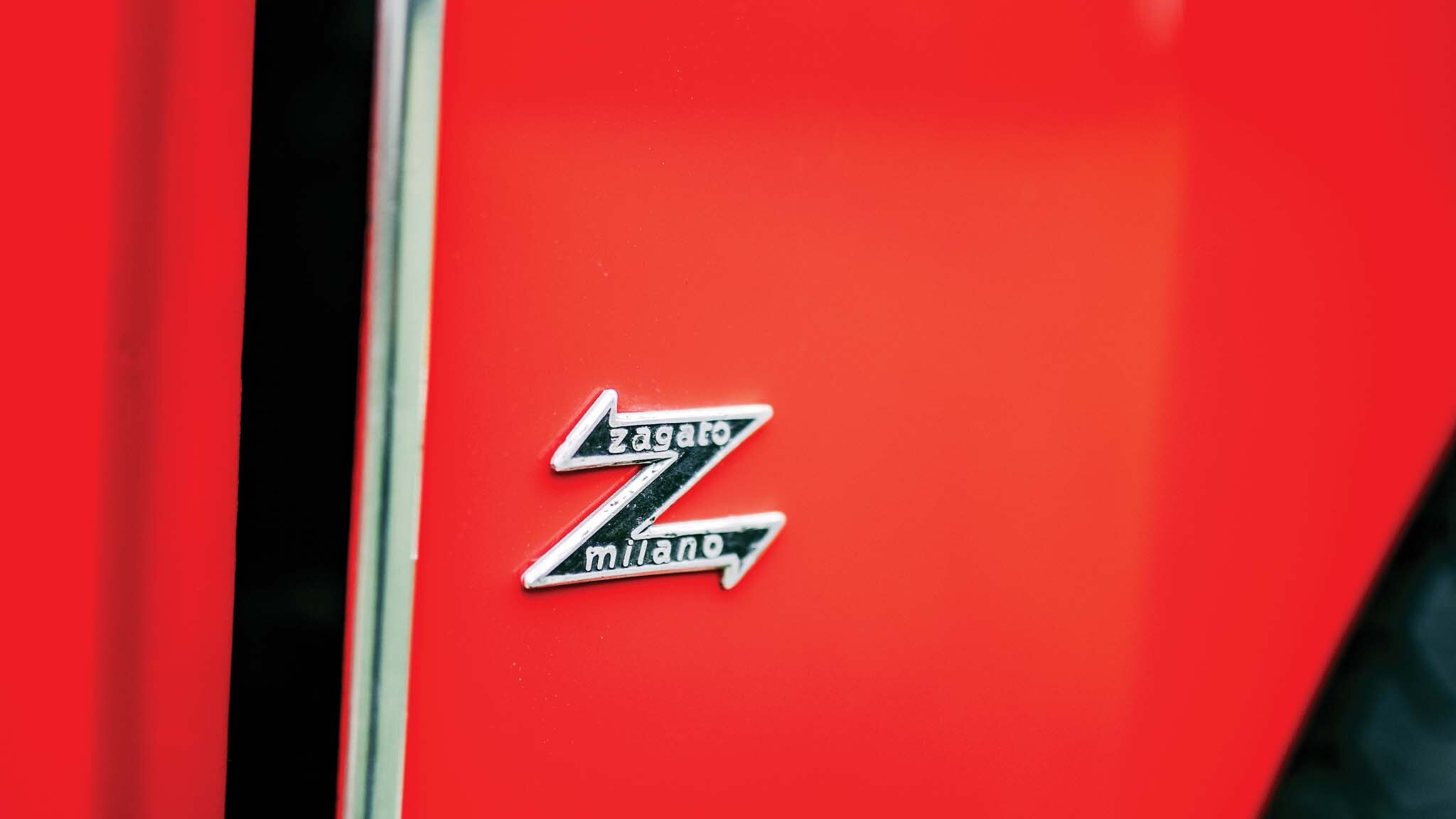 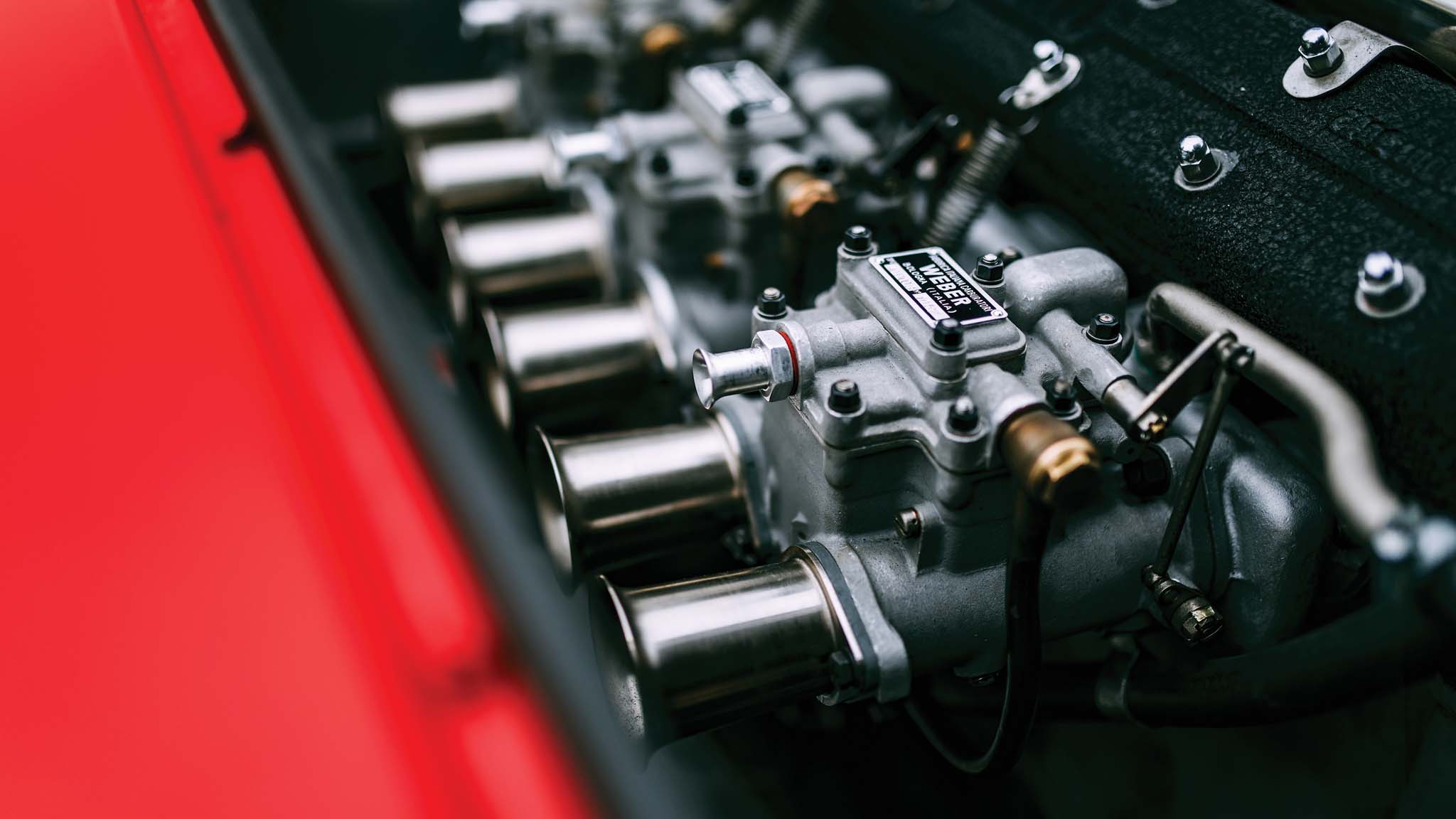 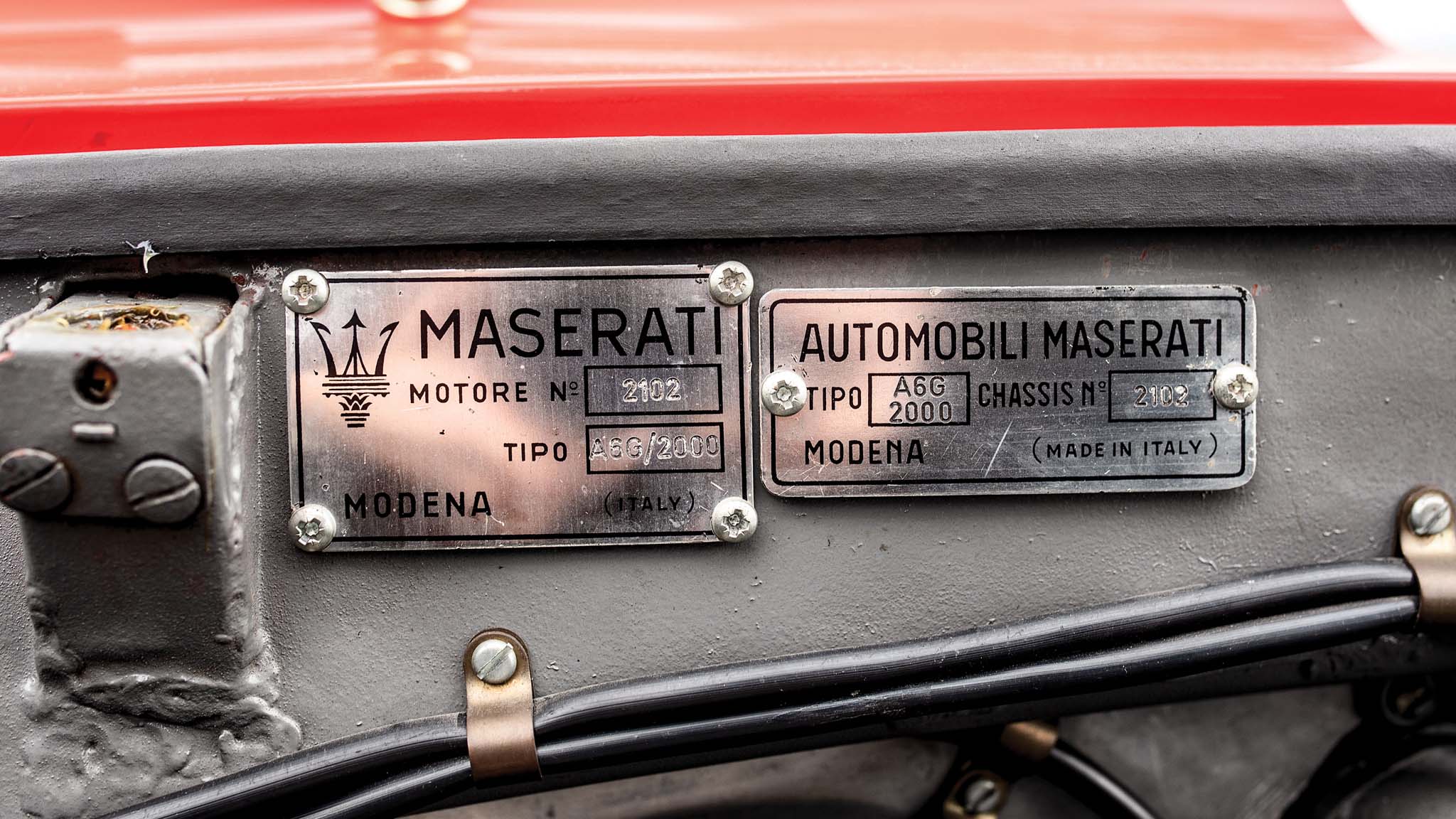