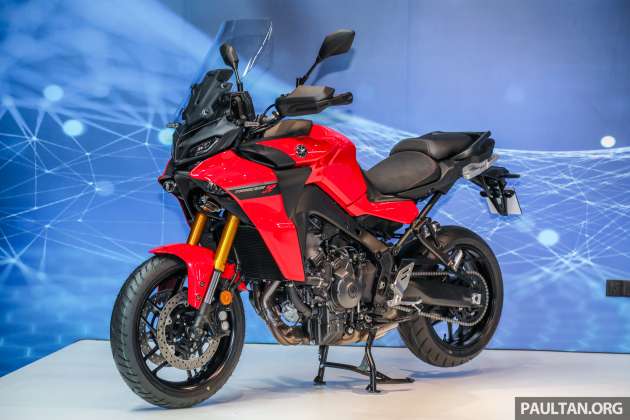 Hong Leong Yamaha Motor (HLYM) has officially announced pricing for the 2021 Yamaha Tracer 9 GT, which starts from RM69,498 excluding insurance. The upright sport-touring motorcycle comes in two colours – Redline (above) and Icon Performance, the silver, black and blue combination also seen on the SP variants of the MT-09 and MT-10 available in Europe.

The Tracer 9 GT is priced in Malaysia to include a two-year, 20,000 km warranty. Compared to the Tracer 900 GT it replaces, the Tracer 9 GT represents a price hike of RM10,610, though the bigger sum brings with it more sophisticated electronics and a larger engine from the latest MT-09; the inline-three cylinder unit now displaces 889 cc and packs 117 hp at 10,000 rpm and 93 Nm of torque at 7,000 rpm.

The new 889 cc engine itself is 1.7 kg lighter than the previous 847 cc unit, while the new exhaust assembly also weighs 1.4 kg less than the set on the previous model. Transmission continues to be a six-speed gearbox with a slip and assist clutch, which has been refined for a lighter pull at the lever. First and second gear ratios have also been revised to better match the new torque curve and for smoother operation.

Another major revision is the engine’s more upright position within the Deltabox chassis, for improved front-to-rear weight distribution and for improved feedback to the rider. The swingarm is new and measures 60 mm longer than on the Tracer 900 GT, though wheelbase remains unchanged at 1,500 mm.

On the electronics front, the Tracer 9 get a six-axis inertial measurement unit (IMU) for the first time, and is 50% smaller and 40% lighter than the earlier-generation unit in the 2015 YZF-R1 superbike. The addition of the IMU enables the inclusion of cruise control, four ride modes, traction control, slide control and wheelie control (three stages in each) and which can be manually selected in each parameter.

Braking is handled by 298 mm discs in front while the rear gets a single 245 mm disc. Two-mode ABS is fitted here, while rolling stock is a set of 17-inch alloy wheels front and rear, with tyres measuring 120/70 and 180/55 respectively.

In terms of rider triangle, the Tracer 9 GT seat is now 15 mm lower than before, and is adjustable for two seat heights without requiring the use of tools. Footpegs are also adjustable by 15 mm vertically, while the handlebar offers two positions.

Being the higher specification offering of the Tracer 9 range, the Tracer 9 GT that is the sole variant sold in Malaysia brings added equipment such as electronic control for the Kayaba 41 mm upside-down front fork and rear monoshock, along with an up-and-down quickshifter as well as heated grips. The hard case panniers are not included in the base price, and are sold separately.