Super Stock Stickler
One of the most head-turning Chevy Super Stock cars within all of NHRA’s North Central Division 3 is the stunning 1965 Nova owned and raced by Stephen Belanger from Elizabeth, Indiana. Belanger races this hard-leaving machine as an SS/I, which he reports was both a strategic counter and also a fun move to the many late-model fuel-injected cars in the class. Belanger has been racing his Nova since 1997. It’s now a very rare car in this configuration, which he touts as being a perfect fit for himself. The car weighs 2,820 pounds and is powered by a high-winding 327ci small-block, collected by a Liberty five-speed transmission. Belanger’s machine has a best e.t. of 9.47, along with a top speed of 136 mph, and has multiple class wins (including at Indy) to its credit. The Nova has also been victorious within NHRA’s Lucas Oil Divisional level of drag racing. This 100-percent independent racer, who is employed by UPS as a mechanic, does all of his own wrenching while campaigning on the circuit with his wife, Laurie. Trick Truck Twist
The father and son racing team of Joe and Dusty Meyer are deep into the mix within North America’s ferocious Top Sportsman scene … but, at the same time, are out of the box a bit. In a category that features, for the most part, door-slammer cars of various brands and configurations, the Meyer Racing team uses a Chevy S-10 in the class. This truck, which was originally conceived back in 2005 (for Pro Stock Truck) spent many of its early years as a Super Gas 9.90 machine with a big-block. Since then it has evolved into the very fast TS bracket class. The S-10 features an 818ci engine that uses three stages of nitrous and is estimated to put out 1,800 horsepower. Dusty runs this S-10 into the 6.7-second zone at 200+ mph on a regular basis. The team gets great hands-on support from Larry Barnett and Chris Watkins. A fun fact; Joe Meyer, from Kansas, is brother to Randy Meyer, NHRA’s highly revered Top Alcohol Dragster team owner whose daughter Megan won the 2019 Lucas Oil World Championship title. 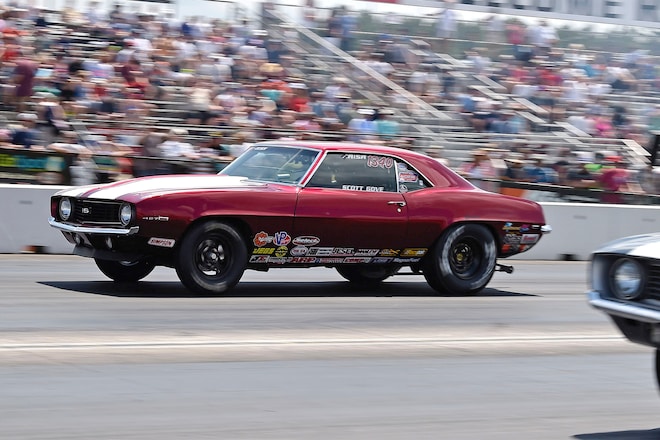 A “Plan B” Experiment
Northeastern racer extraordinaire Scott Gove (Dennysville, Maine) had himself an interesting little project on the go last season. Gove, who might be best known within drag racing for his amazingly fast 7-second-capable SS/AM (of another brand) continued to refine a parallel project: an A/SA 1969 Camaro. Gove, who describes himself as “a Dodge guy with a Chevy habit,” acquired this Camaro from the Northeast-based PC Richards & Sons Race Team. Since that purchase, he has been busy making it one of the fastest A/SA cars in the nation. Gove put a 396ci big-block built by Brian Tilburg into the Camaro and using a Pro Trans-built Turbo 350 has run a best elapsed time of 9.73. Gove, who owns and operates a successful auto repair and race car development shop in Maine, admits that racing his two cars are vastly different driving experiences, but his objective remains the same for both: to be record holders. 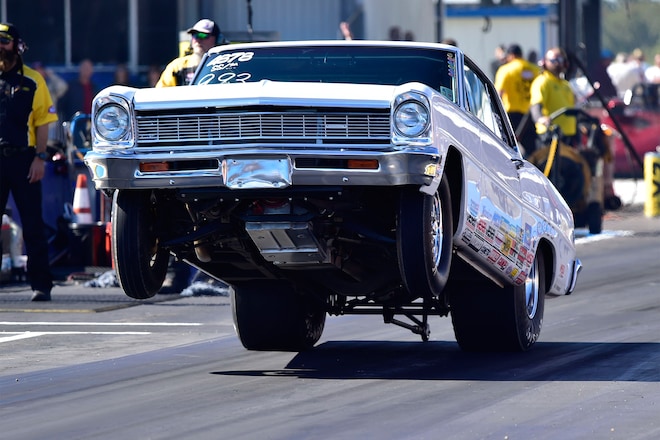 High School Hot Rod
Des Allemands, Louisiana’s Darrin Christen has had quite the love affair with his great-looking and -running 1966 Chevy Nova. Christen revealed that he has owned this car since his senior year in high school (1990) and that it has been evolving ever since. After converting it from street duty to a Super Street (10.90) racer (about 1998), Christen continued the Nova’s evolution and in 2013 it became a Super Stock-legal machine. Christen has been totally hands-on throughout the project, as it’s a self-built car and engine, and he even expertly applied the car’s super-clean white paint. The engine is a 327 featuring Heads Up cylinder heads and produces about 600 hp. The car tips the scales at 2,935 pounds—right at the minimum for the SS/GA class he usually runs in. To date, Christen’s best run has been a swift 9.64 at 133 mph. He races with his dad, Barry, and his wife, Faith.