While huge, the Vectra estate can’t match the talents of its key rivals. 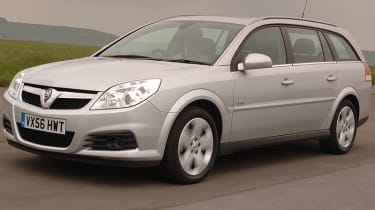 Driving
The Vectra’s most popular engine option is the 1.9-litre CTDi diesel. While it’s a bit rough and ready, performance is decent and it’s torquey enough – though the manual gearbox, as in all Vectras, is rubbery and long-0winded. The optional five-speed auto, meanwhile, is sluggish. You also don’t feel a part of the action in the Vectra – which is exacerbated by the mushy brake pedal and unresponsive throttle. Its handling, suspension and steering don’t have the finesse of, say, a Ford Mondeo, and it comes across as a bit of a plodder, and one that doesn’t relish cross-country routes. Drive gently, though, and the estate fares better. The long wheelbase helps comfort levels and stability, and the soft spring settings deliver a relatively smooth ride that’s adept over urban potholes yet doesn’t become spongy and vague during motorway journeys – even when fully laden.

Marketplace
Vauxhall’s Vectra estate is about as honest and unpretentious as cars in this class get. Unfortunately, this also means the model is rather dull to look at. The plain nose, bland flanks and flat back eng mean it won’t turn many heads. It’s easy to spot the extra 130mm that’s been added into the wheelbase, though, given the estate’s long back doors. The line-up is extensive, and uses Vauxhall’s familiar Life, Design, SRi and Elise trim lines – plus the value-led Exclusiv, and the high-performance VXR. The 120bhp and 150bhp 1.9-litre diesels take the bulk of sales, though 1.8-litre and 2.2-litre petrols are popular, too; that 2.8-litre V6 turbo VXR, like the 3.0-litre V6 diesel, sell more slowly. Rivals include the Ford Mondeo, Volkswagen Passat and Honda Accord, all of which offer commodious estate alternatives.

Owning
Based on the same lengthened floorpan as the Signum, the car has loads of rear space. The estate is also one of the biggest you can buy, with a 1,850-litre maximum load space; not only that, but completely flat sides mean no awkward angles, and the backrests simply flop down, giving you access to a genuine two-metre-long load bay – the best in its class. The only downside is the Vauxhall’s cheap load cover and plastics, which, as we discovered, mark easily. Indeed, what the Vectra lacks is an overall feelgood factor. Sure, owners will appreciate its load-lugging talents when you have to pack for a holiday, but this isn’t exactly a car that will get you excited. It simply doesn’t have the instant kerbside appeal of its rivals. The cabin is drab, overwhelmingly grey and, while all the bits feel as if they’ve been secured well, the quality of the materials is questionable. The layout is also flawed, as stowage is at a premium and some of the switches are fiddly.