Read our full used buyer’s guide on the Suzuki Jimny, focusing on the 1998-2018 model 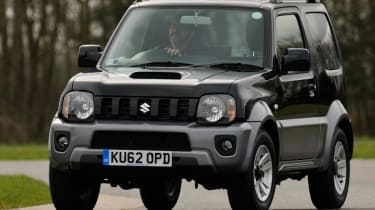 The Suzuki Jimny enjoyed a remarkable 20-year run after being launched in 1998, despite its shortcomings when it came to ride comfort, refinement and on-board technology.

By the time it left the stage in 2018 the Jimny belonged in a different world, with modern rivals offering far more in virtually every department. However, as one owner explained to us: “I’d much rather drive a BMW, Merc or Audi. The Jimny’s wipers are rubbish and the headlights are like candles. But in the snow this little car leaves them all sliding about on the road – its 4×4 capability is unreal.”

So while it’s not the best car on the road, there are few that can match it when the going gets tough on varied terrain. And if you’ve got a limited budget, you won’t get much better value for money elsewhere.

Suzuki has form when it comes to producing small 4x4s: in 1970, the Japanese manufacturer introduced the LJ10, a four-wheel drive vehicle in the style of a Jeep, harnessing the power of a 360cc two-cylinder two-stroke engine. In 1981 Suzuki then came up with the SJ, a larger 4×4 with a 1.0-litre four-cylinder engine. This was the first of Suzuki’s 4x4s to come to the UK, where it was badged as the SJ410 and sold until the late nineties, when the Jimny took its place.

The Jimny represented a leap forward in more ways than one, but it was soon outflanked by others in terms of comfort and safety. Even so, it can be charming to drive. 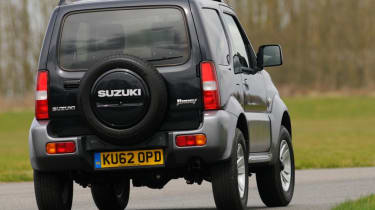 The Suzuki Jimny arrived in March 1999 as a three-door hard top, but a year later the Soft Top was introduced, bringing with it a removable roof. A refresh in April 2004 added a CD/tuner, twin airbags, ABS and EBD, then another update in March 2005 brought a push-button selector for the 4×4 system and remote central locking.

The 4th generation Suzuki Jimny was launched in 2018 and caused quite a stir with its cute retro styling but it was withdrawn in 2020 due to emissions regulations and is due to return as a commercial vehicle.

Which one should I buy?

There’s only one engine: a 1.3-litre petrol. This initially came with 82bhp, but from March 2005 its power was boosted slightly to 85bhp. You can choose a five-speed manual or a four-speed automatic gearbox, but we’d always take the former. 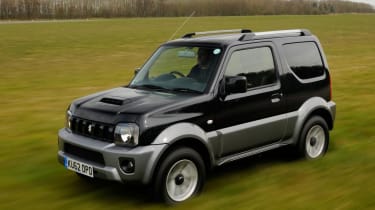 No Jimny is lavishly equipped and, unless you’re buying a relatively new example, you should focus on condition rather than specification. We would avoid pre-March 2005 cars, though, because the revamped engine has variable valve timing, more low-down torque and is more efficient.

Alternatives to the Suzuki Jimny

The Jimny’s only true rival is the Daihatsu Terios, which was sold in the UK from 1998 to 2006. This was also small, cheap and quite capable off road, but not so good for on-road driving. It’s by far the most readily available used Daihatsu, but there still aren’t very many to choose from.

You could also consider the Dacia Duster. It’s larger and more modern than the Jimny, but similarly capable off road, and more refined, affordable and available with petrol or diesel power. If you just want the security of four-wheel drive but have no plans to go off-roading you could buy a Vauxhall Mokka or Nissan Juke. Unlike most B-segment SUVs, these are available with four-wheel drive. Both are plentiful and they’re also much more up to date than the Suzuki.

What to look for

Some cars are fitted with three-spoke alloy wheels, which have been known to buckle. Stronger replacements are available.

The front brake discs are somewhat prone to warping, so make sure to feel carefully for juddering through the pedal as you press it.

If you’re looking to buy one of the soft-tops, check to see if water has managed to get into the cabin, because leaks are a common occurrence.

Look closely for signs of rust, particularly in the wheelarches, door bottoms, boot floor, floorpans, and behind the bodykit.

It’s like stepping back in time. Refinement is poor, the dashboard is dated, many of the materials look cheap, and the rear seats are flat, unsupportive and have very little legroom. It’s not as though the boot is big to make up for those cramped rear seats; it can stow just 113 or 816 litres (seats up/down). Throw in vague steering plus a bumpy ride, and the Jimny is clearly very compromised. 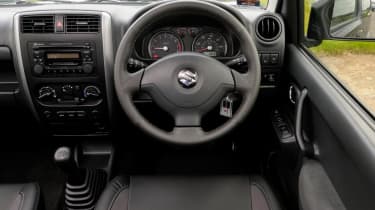 You can get your hands on a Suzuki Jimny for very little, as long as you’re prepared to go for one that’s seen a fair few miles. Our sister site Buyacar has a good selection of newer, cleaner versions on offer.

Even the major service is largely about checking and reporting, though; the replacements are the brake fluid, in-line fuel filter, plus the air and pollen filters. The minor service comprises an oil and filter change plus a check of the coolant level and electrics. The brake fluid should be replaced every two years or 18,000 miles and the coolant every three years or 36,000 miles. There’s no cam belt to renew.

The Jimny has been recalled five times over 20 years. The gearstick could fall apart on cars built up to October 1999. A loss of power steering assistance led to the second recall in July 2010; in April 2014 the third was for axle fixings that could work loose. The fourth came in September 2015 because of potential electronic stability programme failure, while the latest campaign tackled possible brake servo failure.

This generation of the Jimny hasn’t made it into our new or used Driver Power surveys because it’s too specialised. But there are dozens of owner reviews on the Carbuyer website with an average rating of 4.7 out of 5. Many owners revel in the durability of their Suzuki, its off-roading ability and its great looks – but not the poor refinement or disappointing fuel economy.

PDRM reminds the public to follow SOPs under NRP – paultan.org

The Royal Malaysian Police (RMP, or PDRM) is reminding the public to comply with the standard operating procedures (SOPs) issued by the National Security Council (NSC, or MKN) to curb…