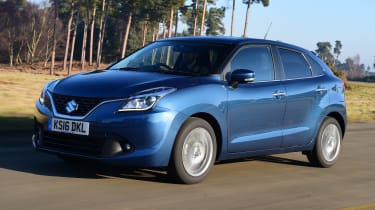 In the UK last year 2.3 million new cars were sold, but Suzuki accounted for just 1.5 per cent of these, with sales of 35,065. New-car buyers invariably turn to Ford, Renault, Peugeot, Vauxhall or other bigger firms rather than head  to a Suzuki dealer, and it’s the same on the used market; mainstream brands get most of the attention, but less obvious options such as the Suzuki Baleno should still be on your shortlist. Value and reliability may be the headline attractions, but excellent practicality is another Baleno trait. However, you might be put off by the car’s anonymous exterior design, or its lacklustre performance in Euro NCAP crash tests; top-spec models achieved four stars out of five, while lesser models without autonomous emergency braking got a three-star score. If that doesn’t concern you unduly, we’d suggest that you take a closer look at this unusual Suzuki.

Ever since Suzuki built its first car back in 1955, the Japanese manufacturer has focused on small cars that place an emphasis on economy and reliability.

Despite its low profile, the brand has produced some great models, which aren’t necessarily class-leading in many areas, but invariably offer an interesting alternative to more obvious mainstream rivals, due to a blend of keen prices, excellent practicality and generous equipment levels.

The Baleno is a perfect example of this, because it combines a roomy, well equipped interior with prices that are significantly lower than for many immediate rivals. The catch is that some of the cabin materials aren’t all that plush, but if you can live with this small penalty, you may find that the Suzuki hatch fits your needs very well.

The second-generation Suzuki Baleno went on sale in the UK on 1 June 2016, in five-door hatchback form only. Buyers could choose between a 110bhp turbocharged 1.0-litre three-cylinder engine (called Boosterjet), or a non-turbo 1.2-litre four-cylinder motor rated at 89bhp. Both were petrol units, with no diesel option offered.

While the bigger engine only came in range-topping SZ5 trim, the smaller unit was offered in SZ-T and SZ5 forms; this was also the only engine of the two to be offered with an automatic transmission in the UK. 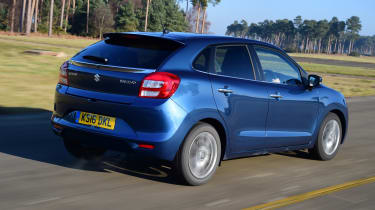 With the Baleno on sale new for just three years there was no time for a facelift or range update along the way, although in spring 2017 Suzuki did introduce a new entry-level model, the 1.2 SZ3.

Ciaran Ffielding, from Derby, owns a Baleno 1.0. He said: “I hardly ever see another Baleno, which is a shame because it deserved to be a much bigger success than it was. I love the spacious cabin, perky engine, excellent fuel economy and faultless reliability so far. The icing on the cake was the price; my ex-demo was much cheaper than an equivalent Clio or Fiesta would have been. I recommend the Baleno.”

Which one should I buy?

The 1.0-litre engine is the faster of the two, but the 1.2-litre unit is sweet enough, and both engines are impressively frugal. While having the option of a six-speed auto is good, we’d go for the manual gearbox for choice; it’s more efficient, far more readily available, and you’ll pay less for one.

Just like the Baleno, the Hyundai i20 and Kia Rio emphasise value and reliability, while the Skoda Fabia is much the same. Closely related to the Fabia are the SEAT Ibiza and Volkswagen Polo, both of which are plentiful and come with some excellent engines, plus high-quality, ergonomically sound interiors.

The best-selling supermini of all is the Ford Fiesta, which is a brilliant all-rounder that’s generously equipped, well made and fantastic to drive, while the Vauxhall Corsa is also widely available, good value and very usable. Also popular and keenly priced are the Peugeot 208 and Renault Clio, which come with a wide range of talents and are desirable, yet neither is class-leading. If value is key, check out the Dacia Sandero; it’s more accomplished than you might think.

What to look for

Many superminis weigh 1,200kg or more; the Baleno tips the scales at 935-980kg, aiding economy and agility.

The door seals tend to creak if the car is left in the sun frequently, but applying some car rubber restorer should remedy this

Autonomous emergency braking is a great feature, but not fitted to every car. Where it is fitted, drivers can adjust how early it intervenes.

The Baleno came with a three-year/60,000-mile warranty, so many examples on the used market will still be under Suzuki’s guarantee.

The cabin is where Suzuki has clearly trimmed the Baleno’s manufacturing costs, because the quality can’t match that of higher-profile rivals. Some of the materials used look cheap and don’t feel that nice to the touch, while the instrumentation is rather cluttered. 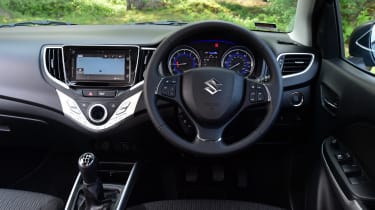 But the impressive amount of passenger space is one of the Baleno’s key selling points: this is more like a car from the class above, something that is highlighted by the split-level boot. This can hold 320 litres with the rear seats up, which is more than the third-generation Ford Focus. Drop the seats, and cargo space stands at 1,085 litres.

Suzuki has recalled the Baleno twice. Both campaigns were launched in March 2018, with the first affecting cars built between February 2016 and November 2017, which could suffer from stop/start glitches and the battery failing to charge properly. A software problem was to blame, and affected 6,313 cars, although this included a number of Swifts and Ignises; an update fixed things.

The second recall also affected the Baleno, Ignis and Swift, and covered 2,247 cars built between February 2016 and March 2017. The problem related to faulty drive belts, which could snap, leading to the battery not charging, and the engine overheating due to the water pump not being driven. To see if a Baleno is subject to recall work, put its VIN into https://cars.suzuki.co.uk/owners/check-outstanding-recall.

Once a Baleno turns three, it’s eligible for cut-price services, which alternate between minor and major, at £129 and £259 regardless of engine. The motors are chain-driven, so there are no cambelts to replace. Brake fluid and coolant need to be renewed every two and three years respectively, but the cost of this is already included in the maintenance charge.

The Baleno hasn’t appeared in our Driver Power surveys, but Suzuki has featured in our annual brands results. In the 2020 poll, it appeared in a respectable 17 place, with a first place for running costs, and an impressive result for reliability. Adding further reassurance, of the 13 owner reviews submitted to Carbuyer.co.uk, all but two awarded the Baleno the maximum of five stars; the others gave it four stars.