Mercedes has released a full specification for the revised version of its all-electric Vito panel van, which has a maximum range of 92 miles 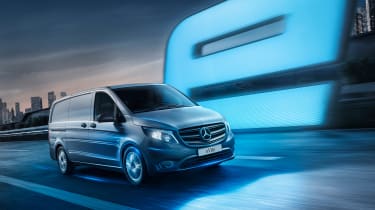 The revised Mercedes eVito is on sale in the UK, priced from £49,074. It features the same range of minor trim updates applied to its recently facelifted diesel-engined sibling – and it’s tasked with rivalling the current crop of zero-emissions commercial vehicles, such as the Peugeot e-Expert and Citroen e-Dispatch.

For a bit of added security, there’s also a standard-fit Thatcham category 1 approved alarm and a full-width partition between the cabin and the cargo bay, and Mercedes says it will throw in an eight-metre charging cable and a domestic charger for free. 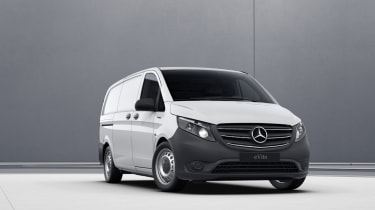 As this is a Mercedes, though, there’s a host of optional equipment to choose from. Upgrades include 17-inch alloy wheels (£1,140), metallic paint (£678), roof rails (£456) and front fog lamps (£234). For £792, Mercedes also offers an upgraded version of the van’s infotainment screen, with an integrated sat-nav system.

The eVito’s electric powertrain is much less potent than the system used by the EQV luxury MPV, sporting a 112bhp electric motor rather than the 201bhp unit found in the people carrier. However, it still develops 295Nm of torque – enough, says Mercedes, to haul around a 905kg payload.

Also, as the eVito’s battery pack is mounted under the van’s floor, there’s no difference in the amount of cabin or cargo bay space. The largest all-electric version shares the same carrying capacity as its combustion-engined sibling, with a maximum load volume of 6.6 cubic metres.

The eVito’s electric motor is powered by a 35kWh battery pack, which can be fully recharged in around six hours using a 7.4kW wallbox charger. When plugged into a DC fast-charger, the system will recover an 80 percent top-up in around 30 minutes – and, on a full charge, the battery can deliver a maximum claimed range of 92 miles.

What do you make of the new Mercedes eVito? Let us know in the comments section below…