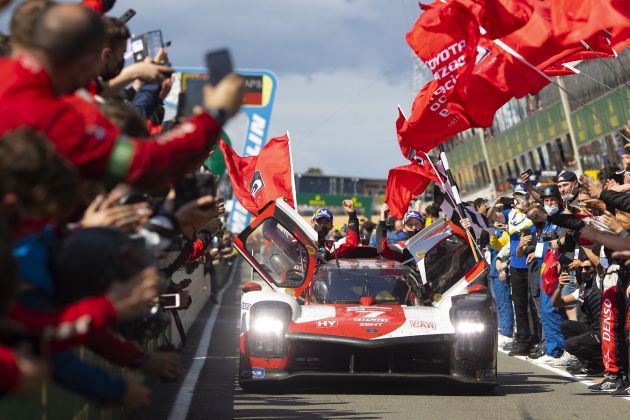 Le Mans has been a happy hunting ground for Toyota in recent years of endurance racing, as the Japanese outfit has now scored yet another race win at the 89th running of the 24 Hours of Le Mans.

Not only was it the team’s fourth Le Mans victory and the team’s first for the #7 Toyota car trio of Mike Conway, Kamui Kobayashi and José Maria Lopez, this is the first outing at Le Mans won by an entry from the Hypercar class, the Toyota GR010 Hybrid Le Mans Hypercar.

Toyota’s Le Mans Hypercar entries held commanding positions in the 24-hour classic which started under safety car conditions due to a downpour just before the start of the race, which was followed by a collision between the #8 Toyota driven by Sebastien Buemi – teamed with Kazuki Nakajima and Brendon Hartley – and the #708 Glickenhaus driven by Olivier Pla, causing Buemi to drop towards the back end of the field.

The #7 car driven by Conway led the race from a pole-position start and continued to set the pace despite sustaining two punctures, while Buemi in the #8 car also sustained damage to its wheel from coming into contact with lapped traffic, as well as a puncture.

A 20-minute safety car period resulted from incidents due to rain in the sixth hour of the race, though Lopez kept the #7 GR010 Hybrid in the lead while Hartley continued to maintain position with the #8 Toyota in second place.

Entering the second 12 hours of the race, Kobayashi extended the #7 car’s lead to just over 30 seconds, with Hartley continuing to give chase. During the 14th hour pitstop for Nakajima to take the wheel of the #8 car, a front-end swap was performed to fix the deteriorated aero performance due to sustaining minor damage. 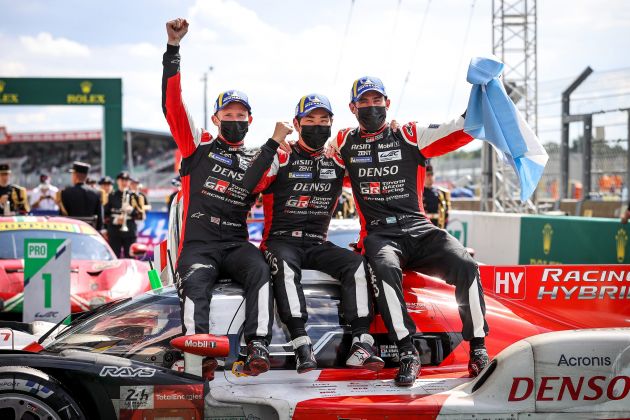 An emerging problem with the fuel system of the #8 Toyota meant it could not complete its full, prescribed stints and needed to pit each time sooner than planned as a result, while the team worked to find a solution.

Repairs could not be made without sacrificing track position, and so drivers of the #8 Toyota were prescribed specific settings at defined points around the Circuit de la Sarthe to resume its original stint lengths. A similar issue befell the race-leading #7 Toyota, and the lessons learnt were quickly applied for that car to maintain its lead.

Ultimately, Kobashi took the chequered flag at the 89th 24 Hours of Le Mans two laps ahead of teammates Buemi, Nakajima and Hartley in the #8 Toyota, with the third podium place collected by the #36 Alpine A480 Gibson piloted by Nico Lapierre, Matthieu Vaxiviere and Andre Negrao four laps behind the race winner.