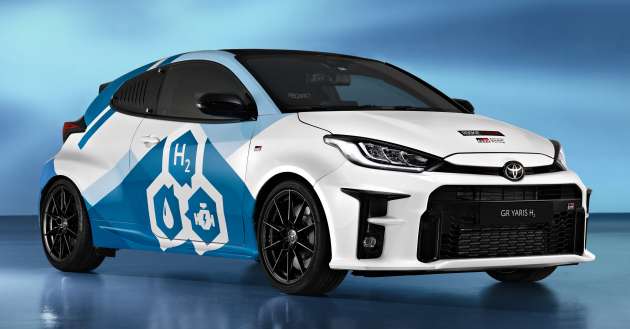 Toyota has long been among the strongest proponents of hydrogen as a power source, and has now showcased its experimental hydrogen combustion engine technology in the GR Yaris, in which its G16E-GTS turbocharged 1.6 litre three-cylinder engine has been adapted to use hydrogen as fuel.

The internal combustion engine from the high-performance three-door hatchback employs a modified fuel supply and injection system, while the hydrogen fuel, tanks and refuelling process are the same as that for the commercially available Mirai, which generates energy through a chemical process in its fuel cells.

This hydrogen-powered engine configuration has already seen deployment in the Corolla Sport that has been entered into the Super Taikyu racing series in Japan, under the Rookie Racing banner of the Toyota Gazoo Racing team to test the setup under the pressures of motorsport.

That engine in the adapted Corolla Sport was entered in the Super Taikyu ST-Q category, and in classic Toyota fashion, president Akio Toyoda entered the series’ five-hour endurance race in August under his pseudonym “Morizo”, alongside racing drivers Takuto Iguchi, Takamitsu Matsui and Masahiro Sasaki.

In a roundabout way of sorts, having originally arrived in the GR Yaris as a series production model, the hydrogen-adapted G16E-GTS three-cylinder turbocharged engine has come back into the B-segment performance hatchback after having served motorsport duties in its larger C-segment sibling.

The engine in the standard road-going GR Yaris produces 261 PS at 6,500 rpm and 360 Nm of torque from 3,000 rpm to 4,600 rpm in European specification – which we receive in the Malaysian market – and which is 11 PS and 10 Nm less than produced from the Japanese market car.

“We’ve taken the first step to compete with and develop our hydrogen-powered engine with the mindset of taking on the challenge. I imagine things will look a little different 10 years from now, and I hope people will look back and see how we took on the challenge with positivity and enjoyed every moment of it,” said Toyota president Akio Toyoda.