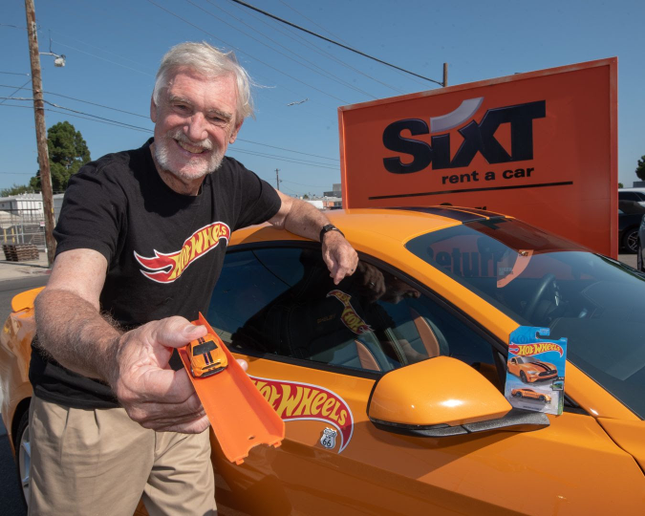 Larry Wood designed a logo for the tour and had many stops along the way to meet enthusiasts. Wood even hand built a Hot Wheels Sixt edition Shelby GT-S that he will auction for charity later this year.

From July 12 to 19, Wood retraced his migration 50 years ago along the fabled highway to join Mattel in Los Angeles. He drove a supercharged Sixt edition Shelby GT-S rental car to greet fans and rediscover America’s adoration of the automobile in the “Larry Wood Sixt on 66 Tour.”

Wood began his career as a designer for Ford Motor Company. In 1968, he was offered the opportunity to become Mattel’s chief designer for their new line of die-cast cars. Wood and his wife, Shirley, packed up their car and drove along Route 66 to California, where he became a legend.

The Woods began their trip at the Chicago stop of the Hot Wheels Legend Tour in Romeoville, Ill. They picked up the supercharged Shelby GT-S and drove to the gathering. After signing autographs and greeting fans, they began their “Sixt on 66 Tour.”

Wood and Shelby have a long and very deep connection. Not only did Wood know Carroll Shelby, he memorialized many of the Texan’s famous cars as part of the Hot Wheels line up.

Then in 2009, Wood was tapped by Shelby to work with the company’s chief designer, Vince LaViolette on the 2010 Ford Shelby GT350. The company built the Shelby GT350 for four model years and those cars are highly coveted collectibles, just like many of the Hot Wheels that Wood designed.

Now years later, Wood is driving a new Shelby GT-S that LaViolette designed and built at Shelby with input from Sixt.

Wood designed a logo for the tour and had many stops along the way to meet enthusiasts. Wood even hand built a Hot Wheels Sixt edition Shelby GT-S that he will auction for charity later this year.

Team Shelby plans to host Wood for a party with a Sixt car during the Hot Wheels convention in Los Angeles during October.