The Porsche 911 Hybrid is a question of when rather than if. It has been confirmed multiple times by Zuffenhausen’s top brass, so it’s definitely happening. Unlike the Panamera and Cayenne E-Hybrid models you can plug in to recharge their batteries, the upcoming sports car will be of the non-PHEV variety. Ahead of its official debut, the first production 911 to have an electric motor has been caught carrying extra lights.

Different prototypes were spotted by our spies at the Nürburgring (yes, the 2022 test season has started) and in snowy Sweden with yellow round stickers revealing their electrified nature. The tacked-on circular LEDs look rather strange and we’re wondering whether they’ll be there on the final version. Interestingly, the front air intakes have vertical elements behind the horizontal trim piece of the bumper. 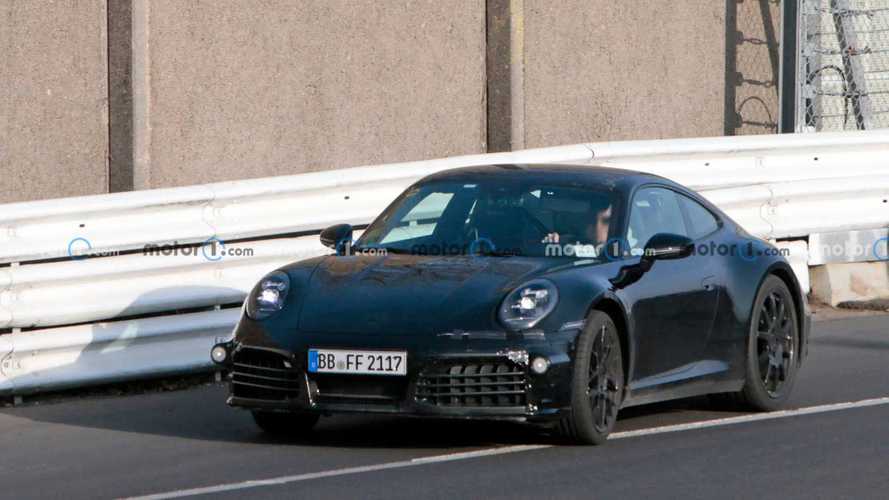 You’ll also notice both test vehicles had centrally mounted exhaust tips and were missing the vertical slats for engine cooling. Another tidbit the two have in common is a roll cage mounted where you’d expect to find the rear seats. In the case of the prototype caught in northern Europe, you’ll also notice a bunch of wires dangling on the passenger seat.

Because a Porsche still has to be about performance even if it’s a hybrid, the electric assistance will be about making the 911 faster rather than saving you money at the fuel pump. Of course, the main reason a partially electrified powertrain is happening is to keep up with tougher emissions regulations. The peeps from Stuttgart have been coy about details, only saying it’ll borrow tech from the Le Mans-winning 919 Hybrid endurance racer.

A purely electric 911 won’t be coming anytime soon even though Porsche projects more than 80 percent of its annual sales by 2030 will be represented by EVs. In fact, the company has said it wants the iconic rear-engined machine to be the very last car in the automotive scene to lose the gas engine.

Meanwhile, the smaller 718 Boxster and Cayman will bid adieu to the ICE in 2025 when the next-generation sports car will morph into an EV. The same will be happening to the Macan since the EV debuting in 2023 will be sold alongside the gasoline-fueled model for a couple of years or so until the latter will be discontinued.