Hello from PACE 2022, which is happening this weekend at the Setia City Convention Centre. Over at Ford’s corner of the hall is the Ford Ranger XLT Plus Special Edition. This is our first live look at the SE after it was announced late last month by Sime Darby Auto Connexion.

The latest variant of the Ranger T6 is a macho one, adding choice aesthetic goodies to the mid-range XLT Plus variant. The most obvious change is up front, where the SE wears a Raptor-style grille with the Ford script in block letters. It’s not the exact Raptor grille though – it has the Ranger script on top, but the all-black, zero-chrome item is close enough.

The Raptor-style grille has to be the most popular mod among Ranger owners and now you can get the look from the factory. The macho additions don’t end there – the SE also gets black plastic wheel arch extensions and a tube-style sports bar on the bed. Inside, there are illuminated side sill scuff plates and a front dash cam with a 32 GB memory card and smartphone connectivity via an app. 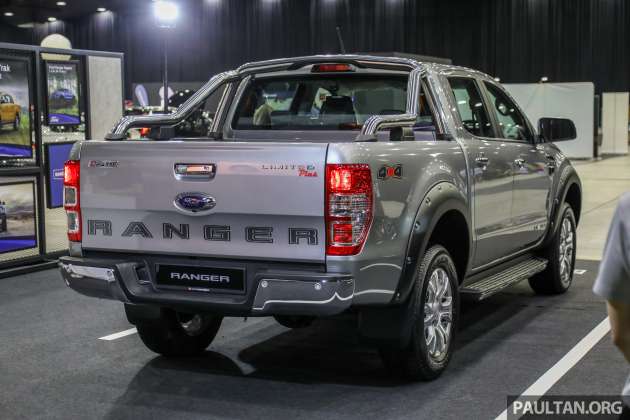 Under the hood is the latest 2.0 litre EcoBlue turbodiesel engine produces 180 PS and 420 Nm of torque, mated to a 10-speed automatic gearbox, four-wheel drive and a limited-slip rear differential. The Ford Ranger XLT Plus Special Edition is priced at RM136,888.

Great deals from the brands aside, purchasing at PACE will net you bonus goodies and savings. All new car bookings will come with RM2,500 worth of vouchers from our partners (RM1,000 for pre-owned cars) and buyers will be in the running to win smartphones and a grand prize of a holiday package worth RM25,000. Full details here.