Based on the Toyota Corolla Touring Sports, the Suzuki Swace estate comes to the UK 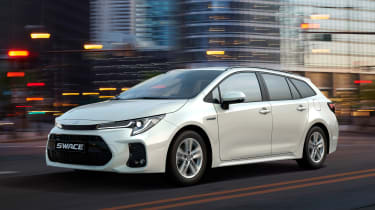 The Suzuki Swace estate is on sale in the UK now priced from £27,499. It joins the recently unveiled Across SUV in the firm’s new line-up of Toyota-based vehicles – and it acts as a rival for the new Skoda Octavia and Volkswagen Golf wagons, as well as the family-favourite Ford Focus Estate.

The Suzuki Swace is heavily based on the Toyota Corolla Touring Sports – and, like the Across, it features a subtly tweaked radiator grille, restyled front and rear bumpers, new LED headlamps and a tweaked pair of tail lights. Buyers also have their choice of seven paint finishes, including Oxide Bronze Metallic and Dark Blue Mica.

With the exception of some new leather upholstery, the Swace’s interior is transferred wholesale from the Corolla. Elsewhere in the cabin, buyers also get a couple of cupholders, a pair of USB ports, an ambient lighting system and a 12V accessory socket in the boot.

The range-topping SZ5 variant starts from £29,299 and adds front and rear parking sensors, park assist, keyless entry and a wireless smartphone charger for the centre console. There’s also a couple of extra safety features, such as a blind-spot monitoring system and rear cross-traffic alert.

The Swace’s hybrid powertrain is another direct transfer from the Corolla – although Toyota has only supplied Suzuki with the Corolla’s least powerful unit. The system comprises a naturally aspirated 1.8-litre four-cylinder petrol engine, a CVT gearbox and a 71bhp electric motor, which produce a combined output of 120bhp. 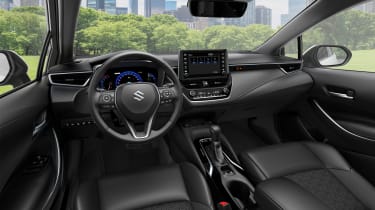 As such, the estate’s 0–62mph time is a rather pedestrian 11.1 seconds – but, as a trade-off, Suzuki says the Swace’s powertrain will return 64.2mpg on the WLTP combined cycle. CO2 emissions are equally minimal, with a claimed figure of 99g/km.

Like the Toyota Corolla Sports Touring, the Swace features three drivetrain modes – Normal, Eco and Sport – along with an EV function, which forces the powertrain to run in electric-only mode, providing a couple of miles-worth of emissions free driving.

As with most badge-engineered cars, the Suzuki Swace shares the same level of practicality as its donor vehicle. So, its 596-litre boot capacity is exactly the same as the Corolla’s, and if you fold the rear bench flat, you’ll unlock an identical 1,606 litres of capacity and an area large enough to load items up to 1.8 metres long.

What do you make of the new Suzuki Swace? Let us know in the comments section below…