Bargain-basement MG HS SUV gets with a 254bhp plug-in powertrain and a starting price of £29,995 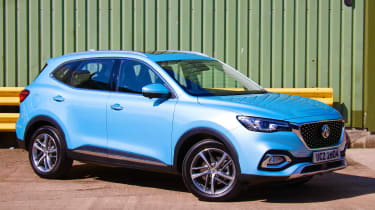 MG has revealed a new plug-in hybrid version of the HS, which goes on sale in the UK this October priced from £29,995.

It joins the pure-electric ZS EV in the brand’s line-up, while acting as a cheaper alternative to the Peugeot 3008 PHEV and Toyota RAV4 PHEV – helping MG to cover all the bases in its electrification drive.

The HS is the first model to feature MG’s all-new plug-in hybrid powertrain, which comprises a turbocharged 1.5-litre four-cylinder petrol engine, a 16.6kWh battery pack and a 90kW electric motor. The combustion engine is mated to a six-speed automatic gearbox, while the electric motor is hitched to a four-speed drive unit.

MG says its new plug-in hybrid powertrain generates a maximum output of 254bhp and 370Nm of torque – enough for a 0–60mph time of 6.9 seconds, a top speed of 118mph and a maximum pure-electric range of 32 miles.

More importantly, MG claims the HS PHEV will deliver a WLTP fuel economy figure of 155.8mpg and just 43g/km of CO2. When driving in the city, the company also says that the SUV’s electric range can be stretched to as far as 43 miles. When plugged into a 7kW wallbox charger, the HS PHEV’s battery pack will also recover a full charge in three hours. 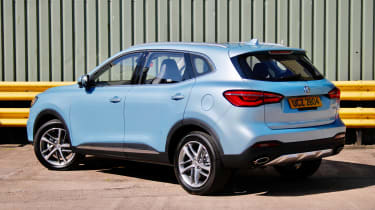 Inside, buyers get a dual-zone air conditioning system, a leather steering wheel, an auto-dimming rear-view mirror, a digital instrument cluster and a 10.1-inch infotainment system with Apple CarPlay and Android Auto. Buyers also get a 360-degree parking camera as standard, along with adaptive cruise control and hill descent control.

The range-topping Exclusive model has a starting price of £32,495 and builds on the base-model’s specification with LED headlights, scrolling indicators, a panoramic glass roof and an electrically operated tailgate. The cabin also gets a subtle lift with aluminium pedals and a customisable ambient lighting system.

Now read how the MG ZS fared when we pitted it against the Citroen C3 Aircross and SEAT Arona in an Auto Express triple test here.

TC Subaru has announced the opening of a new Subaru 3S centre in Kuantan. Owned and operated by dealer-partner Eastern Boxer, which also runs Subaru Kuala Terengganu, the new Kuantan…

The High Voltage Coolant Heater (HVCH) also presented issues and affected 3,150 cars. First adopters may have the joy of being the first ones to drive a new car. On…
F1