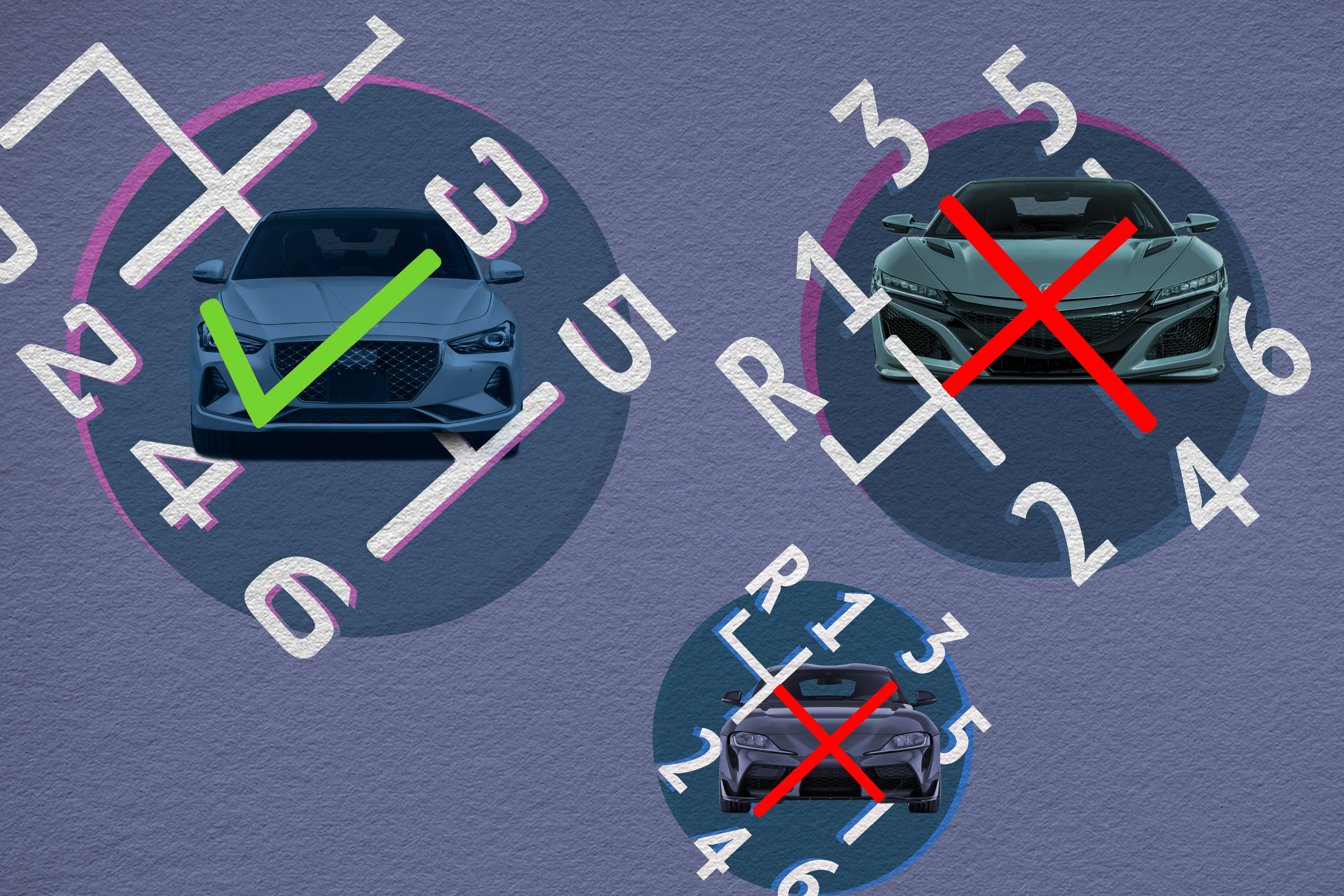 National Stick Shift Day is meant to celebrate the glory of three-pedal automotive operation, but we know as well as anyone that the technology is effectively outmoded. Given recent advancements in engine performance and fuel efficiency, the advantage of the stick shift these days comes down almost exclusively to driving pleasure. For many automakers, that’s not a compelling enough reason to keep a manual option in a model’s lineup.

Which is too bad, because there are plenty of fun cars still on the road. And so, as National Stick Shift Day 2019 approached, we got to thinking: Which cars do we wish still had them? And similarly, which are we relieved don’t?

Answers among our staff varied. Below is a list of where we’d love to see a stick — and a few where we’re glad it’s gone.

There’s no better way to start this off than with our very own Best of 2019-winning Genesis G70, specifically the 3.3T variant.

“The G70 offers a six-speed manual, but it’s only available with the base four-cylinder engine,” says Mike Hanley, senior research editor. “We wonder what a manual could do with the sedan’s available twin-turbo V-6, an engine we’ve come to love in our long-term G70.”

Another luxury sports sedan that merits the stick-shift treatment is the 2019 Alfa Romeo Giulia, Hanley says: “The Giulia has established itself as a fun-to-drive, great-handling luxury sports sedan, and the 505-horsepower Quadrifoglio version packs a big punch thanks to its twin-turbo V-6 engine. While the sedan’s sole transmission, an eight-speed automatic, is a good one that works beautifully with the standard turbo four-cylinder, the right manual gearbox would make the Giulia even more compelling to enthusiasts.”

Fred Meier, Cars.com’s Washington, D.C., bureau chief, pinpoints what makes the manual so fun, then adds the Mazda3 as his contribution.

“A stick no longer wins on performance or even mileage and it has no place at all in a world of electric vehicles,” Meier says. “Even so, I’ll miss them — less so in expensive performance cars than in sporty affordable cars where flogging a small engine is daily fun.

“Technically, a stick is still available on the Mazda3, but it’s on life support in only one body style at the highest price point. The car handles well and is both practical and sporty, but its modest power seems even more modest with the mpg-tuned automatic. Its competent manual makes it a different car. The Mazda3 is one of several cars now where if they offer a stick at all, you have to compromise on price or features you want to get it.”

Diverging wildly from his other two picks, Hanley threw a bananas SUV into the mix.

“The high-performance Mercedes-AMG G63 SUV is powered by a 577-hp V-8 engine and starts around $150,000,” he says. “With its Brinks-truck styling, side exhaust pipes and front cow catcher, the thing is preposterous. So why not add a little more insanity by offering a manual transmission?”

Both Kelsey Mays, senior consumer affairs editor, and Brian Normile, production editor, spoke up on behalf of the BMW 3 Series.

“The 3 Series has offered a manual for decades, sometimes even in combinations — like the AWD wagon variant — that rivals seldom allowed,” says Mays. “It wasn’t always the best manual, as some iterations suffered rubbery shifting. But its mere availability helped keep the car in hallowed circles for automotive enthusiasts across umpteen eras. Alas, with its G20-generation redesign, the 3 Series sedan drops U.S. availability of a manual.”

“This is tough because I can’t really think of a manual that I miss,” he says. “Some of the cars dropped them but put in really good automatics, like the 3 Series. I miss that one as an option.”

In its final iteration, the manual transmission on the Accord was available exclusively with a 278-hp, 3.5-liter V-6 in the coupe body style — which was dropped for the car’s dramatic 2018 redesign.

“I only got to drive one once a long time ago,” Wong laments. “That was a fun car.”

Where We’re Glad a Stick Is Gone

Though this list is short, Wong had some grievances to air about Subaru’s performance-oriented compact sedan and hatchback: “There are manual transmissions I don’t like, like the WRX and WRX STi. I’ve never been able to them figure out.”

“The 2013-15 BMW M5’s manual transmission seemed like a courtesy offering for a small vocal crowd (available in North America only) versus a from-the-start integration, and it drove like that, too,” he says. “Considering automatics are so good, fast-shifting and have a gear for seemingly every situation — like the eight-speed in the new M5 — I think it’s perfectly fine to have no manual transmission rather than a poorly executed one.”

And, finally, Hanley offers what he admits is a rather controversial choice for this side of the divide: “OK, hear me out. I was skeptical that an eight-speed automatic was going to cut it in Toyota’s resurrected halo sports car, but the transmission is exceptional: It makes refined, extremely quick shifts during aggressive track driving and is well-matched to the car’s turbocharged straight-six engine.”