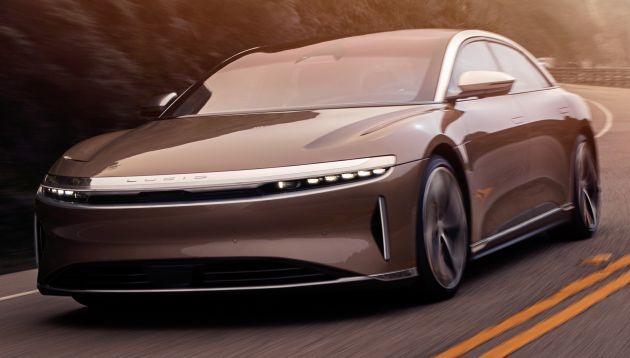 The Range is one of two versions of the Lucid Air Dream Edition, which offers 833 hp along with the aforementioned 832 km battery range, and attains the 0-60 mph (0-96 km/h) sprint in 2.7 seconds. The other is the Lucid Air Dream Edition Performance, which as its name indicates, is even sprightlier with 1,111 hp and does the 0-96 km/h sprint in 2.5 seconds, though with slightly less range at 471 miles (754 km).

According to the Californian firm, a pair of Dream Edition Range cars were taken on a real-world test drive where a journalist and Lucid CEO Peter Rawlinson drove separate cars from Los Angeles to San Francisco “at highway speeds” including a cruise set at 67 mph (107 km/h), and across San Francisco Bay to Lucid headquarters, arriving with 72 miles (115 km) of range to spare.

The closest rival in terms of outputs is the Tesla Model S in Plaid+ form, which also offered 520 miles (832 km) of battery range and 1,100 hp of output from its electric motors. This was later cancelled, as Tesla CEO Elon Musk said that there is “no need, as the Plaid is just so good,” and told Electrek that there are no trips longer than 400 miles (640 km) where the driver doesn’t need to stop anyway.

As such, the Tesla with furthest reach is the Model S Long Range at 412 miles (659 km), and so it appears that the Lucid Air is in line with the Lucid CEO’s claims that it is a new range record for an electric vehicle.

The 900-volt architecture in the Lucid Air enables 300 kW of DC charging through its Combined Charging System (CCS) socket, which offers a claimed 30 km of range per minute, or 480 km in 20 minutes of charging. The car can also be charged by AC electricity at a a rate of 19.2 kW.