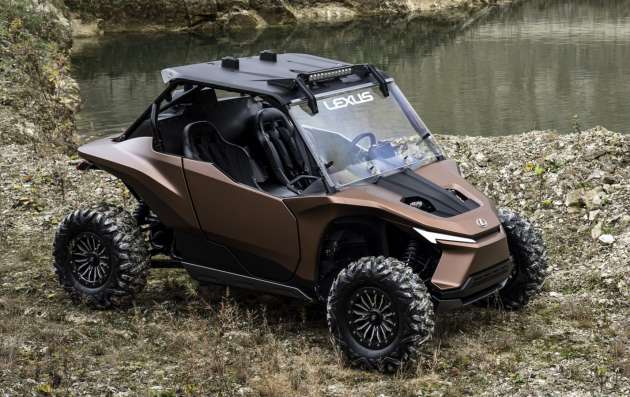 Lexus isn’t usually associated with off-roading, but the Japanese automaker is showing that it isn’t short of the know-how to do so, showcasing its abilities through its ROV (recreational off-highway vehicle) Concept. The side-by-side vehicle also happens to be hydrogen-powered, highlighting Toyota’s continued push for the format as a viable power source.

There’s no mistaking the ROV Concept for an SSV, with its exposed suspension, protective cage and chunky off-road tyres, but the company says its design team wanted to create the kind of vehicle people would expect from a luxury carmaker yet without sacrificing the rugged performance of an ROV.

With a lightweight body made up of a strong tubular frame and a high degree of suspension travel, the company says that the ROV Concept has been designed for both comfort and fun off-road driving. Styling-wise, the front/rear lights and the Lexus badging borrow from the automaker’s latest design language, and the vehicle also features a dark bronze colour specially created for it.

It’s powered by a 1.0 litre engine, which unlike in an FCEV works like a regular petrol internal combustion engine, with a high-pressure tank delivering hydrogen with precise direct injection. Like the Toyota GR Yaris with a hydrogen combustion engine, the unit on the ROV Concept produces almost zero emissions – almost, because only a negligible amount of engine oil is burned during driving.

Inside, the cockpit features a design theme based on its Tazuna concept philosophy, which was first seen on the LF-Z Electrified study earlier this year. Elements include a simple meter to display the information the driver needs so they can concentrate on driving.

Because it is a Lexus, the ROV Concept’s cabin gets the usual dose of craftsmanship and luxury treatment – there’s a leather-wrapped steering wheel and hard-wearing synthetic leather for the seats, which also feature integrated suspension elements to help smooth out the ride further.