Lido Anthony “Lee” Iacocca, the automotive executive who pioneered the Ford Mustang and enacted a bold turnaround plan that saved Chrysler from bankruptcy, died at his home in Bel Air, California on Tuesday. He was 94.

Iacocca was born October 15, 1924 in Allentown, Pennsylvania, to immigrant Italian parents. He graduated from nearby Lehigh University in 1945 with a degree in industrial engineering, and was immediately accepted into a Ford Motor Co. recruiting program to train future executives. Earning a Master’s degree in industrial engineering from Princeton in 1946, he joined a Ford regional sales office in eastern Pennsylvania.

Iacocca is survived by his two daughters, Kathryn Iacocca Hentz and Lia Iacocca Assad, his sister, Delma Kelechava, and eight grandchildren. Mary (née McLeary), his first wife, died in 1983, of complications from diabetes; after her death, Iacocca invested immense money and time toward efforts to find a cure for the disease. He married twice more; to Peggy Johnson, in 1986 (annulled in 1987), and to Darrien Earle, in 1991 (divorced in 1994).

By the late 1950s, Iacocca had distinguished himself at Ford and worked his way up to a corporate director position. He was named vice president and manager of the Ford Division in 1960; four years later, his brainchild, the Mustang, would become a knockout success. 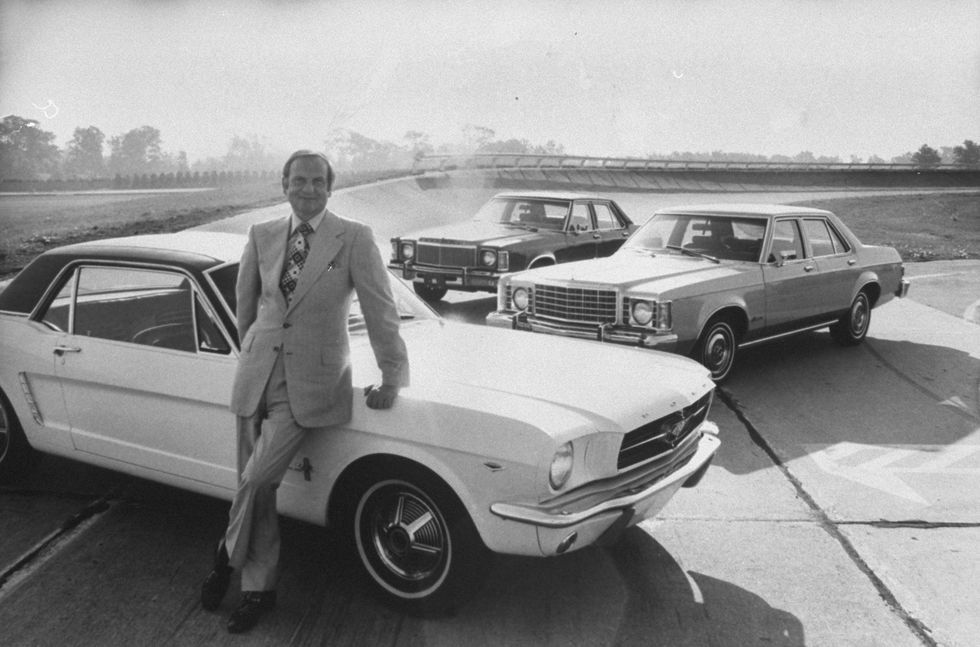 The first Mustang was relatively cheap to build, sharing plenty of parts with the Falcon economy car. But Iacocca’s hunch that buyers wanted sporty style in an affordable package paid off immensely. It still stands as the best-selling new Detroit model ever, with the first-generation car amassing more than $1 billion in profits for Ford.

The car launched Iacocca to fame. In April 1964, he appeared on the cover of Time and Newsweek during the same week. The outspoken, charismatic executive wasn’t like typical auto industry executives—he was straight-talking, quick with a quip or a jab. Not since Henry Ford had a Detroit exec become such a household name. In 1970, he became president of Ford, the second-most-powerful person at the company behind chairman Henry Ford II.

Iacocca’s relationship with Henry Ford II was contentious. The scion to the Ford family fit the traditional mold of an auto industry big-wheel: conservative, businesslike, and not seeking attention. By contrast, Iacocca had become a celebrity. He socialized with Frank Sinatra, gave freewheeling interviews to the press. In July 1978, Ford personally fired Iacocca.

The next chapter of Iacocca’s career was even more impressive. Mere months after being fired from Ford, Iacocca took over as president and COO of Chrysler. The automaker was in a dire situation, dragged down by debt and losing money every day. Less than a year later, Iacocca was promoted to chairman and CEO.

He enacted a decisive series of cuts and reorganizations to help minimize the company’s record-setting losses. And, in 1979 and 1980, Iacocca convinced Congress and President Carter to guarantee $1.5 billion in loans to keep Chrysler afloat. Such a move was unheard of in American business, but Iacocca pulled it off: The automaker ended up borrowing $300 million less than the agreement allowed for, and paid the loans back years in advance.

Chrysler’s turnaround was built on the back of a series of cars that, perhaps even more than the Mustang, is permanently linked to Iacocca’s name: The K-Car. The front-wheel-drive, compact platform offered the fuel economy that post-gas-crunch buyers desired. Introduced in 1980, the Dodge Aries and Plymouth Reliant became runaway sales successes. And in 1984, the platform spawned an entirely new category of vehicle: the minivan. 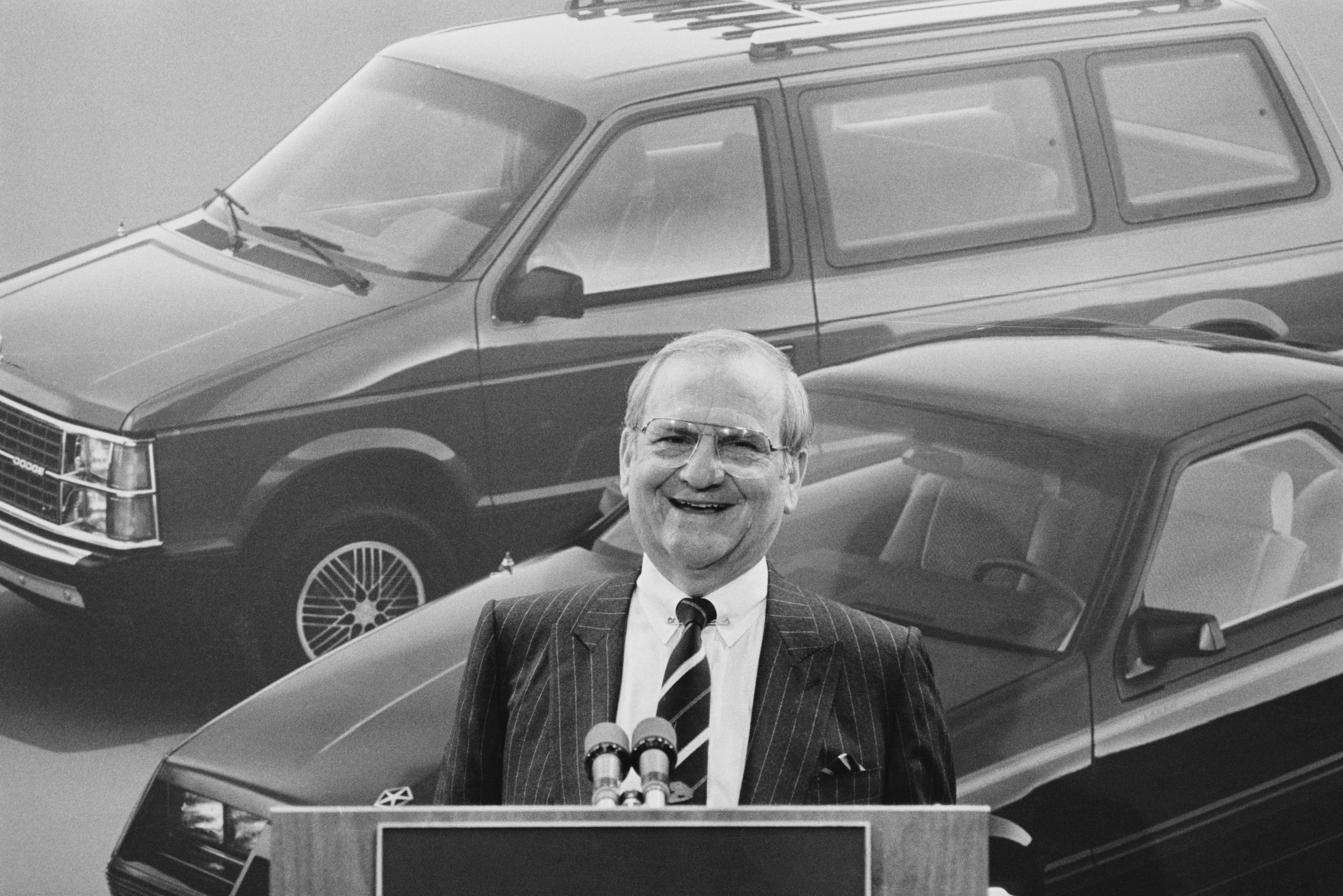 By now, Iacocca was at the peak of his fame. He wasn’t just Chrysler’s chief executive; he was the automaker’s spokesman to America, appearing in dozens of television commercials touting the new lineup of innovative cars. His pitch was direct and sincere: “If you can find a better car, buy it.”

Iacocca’s promotion of Chrysler at the time wasn’t without controversy. He singled out Japanese automakers almost exclusively, bemoaning the presumption that US buyers assumed any Japanese car was superior to its American counterpart. His comments, viewed today, verge on jingoistic. But nobody can deny that his business decisions brought Chrysler back from the brink. The year after the US Government guaranteed Chrysler’s loans, he took a paycheck of just one dollar; by 1987, he was the industry’s highest-paid executive.

Iacocca retired from Chrysler, somewhat reluctantly, in 1992. On his way out, he hosted lavish going-away parties for himself around the world. He never really left the business world. In 1995, along with billionaire Kirk Kerkorian, Iacocca tried to spearhead a hostile shareholder takeover of Chrysler. It failed, and the aftermath damaged Iacocca’s legacy with executives still working at the automaker.

He took on other ventures in retirement. He invested in EV startups; he founded Olivio, which made olive oil-based butter substitutes. In the early 2000s, he once again stepped up as Chrysler pitchman, appearing in commercials with celebs like Snoop Dogg and Jason Alexander.

Iacocca’s legacy is not without dark spots. At Ford, he rushed the ill-fated Pinto into production; when the car showed a tendency to explode in rear-end collisions, Ford was forced to recall 1.5 million cars and pay millions in damages. And after turning things around at Chrysler, Iacocca went on a buying spree. Chrysler acquired positions in Gulfstream, invested in tech companies, took over Lamborghini and invested in a rental-car business. Alongside a few poorly-managed vehicle launches, this large-scale spending threatened to reverse Chrysler’s ascent.

But Lee Iacocca will best be remembered for the knockout products he launched. With the Mustang, he invented the pony car. With the K-Car, he gave Chrysler a road back to profitability. With the minivan, he invented the defining vehicle for a generation of families. He presided over the launch of the Dodge Viper and the Jeep Grand Cherokee. He’s the only automotive executive to pen a best-selling autobiography. Nearly 30 years after he stepped down from Chrysler, he was still a household name.