Home » Car Reviews » How to Flush and Dispose of Antifreeze

In the good old days, you could drain fluids from your car and just dump them in the backyard without another thought. A small hole and some gravel were all you needed. Out of sight, out of mind. Well, as it turns out, pouring chemicals into the ground doesn’t make them magically go away. In fact, that stuff usually ended up in local water supplies and made people sick.

Today, we know better and have a whole list of environmental laws and regulations on what can and can’t be dumped. As you might imagine from reading this post, antifreeze is not on the approved list. Getting rid of antifreeze the right way can sound like a real pain at first, but it’s not difficult at all, and it’s absolutely the right thing to do.

The Drive’s elite team of researchers and editors have been through the process of disposing of antifreeze in several different areas of the country. Some places are different from others, but the basic idea is the same no matter where you are. We can’t tell you what the law requires in your specific area, but we can break down the best ways to find out what the regulations are. We’ll also get into how to drain and replace your antifreeze and give some helpful safety tips as well. 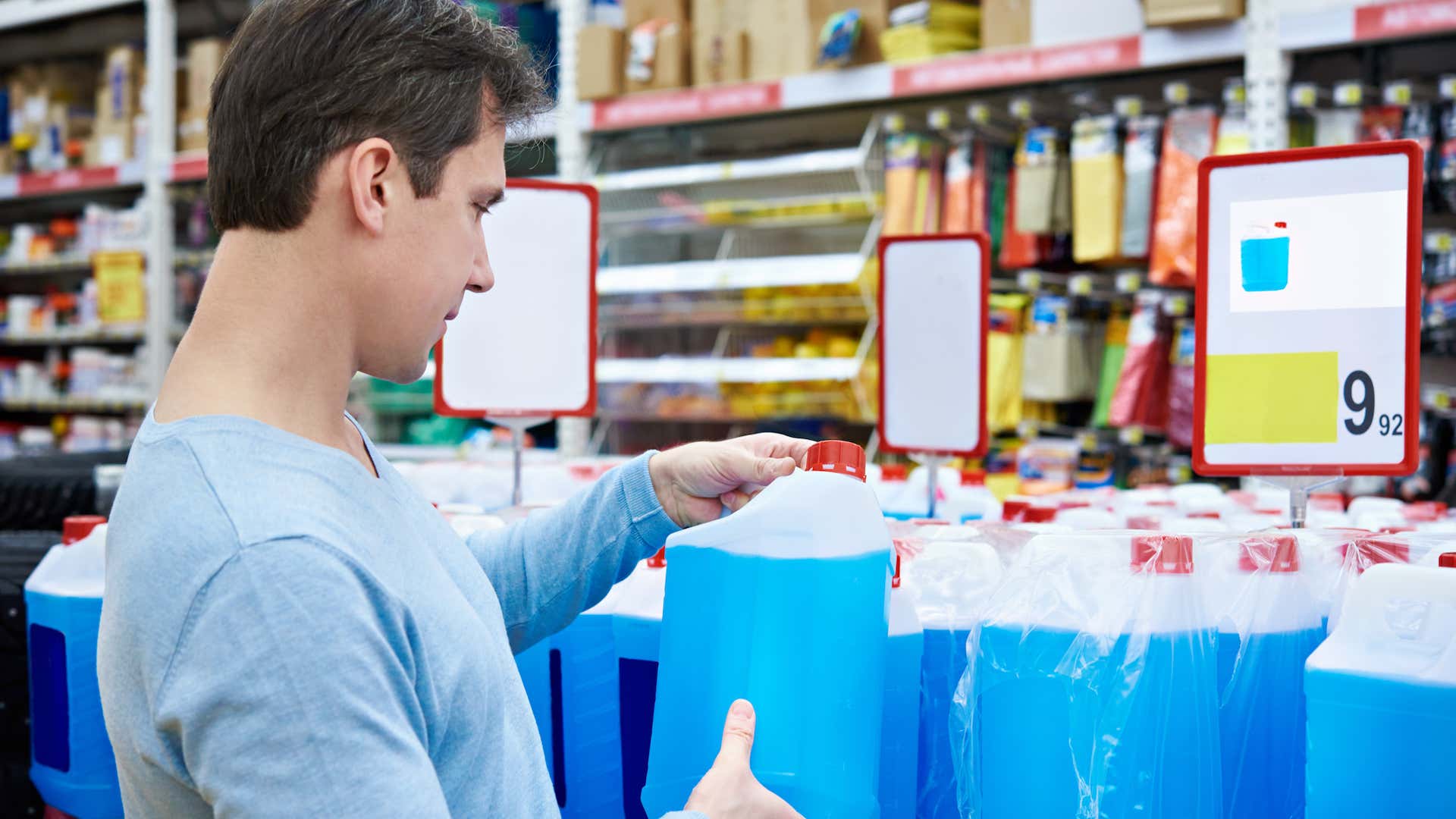 Antifreeze does more than prevent freezing.

Antifreeze is at least partially made from a chemical called ethylene glycol. Different brands and types of antifreeze may have different concentrations and coloring, but at their base, they all start with ethylene glycol. When used in a car, the solution is mixed with water, usually half and half, and is stored in a reservoir in the vehicle’s engine bay.

Estimated Time Needed: 1-2 hours, depending on your skill level and the type of vehicle. 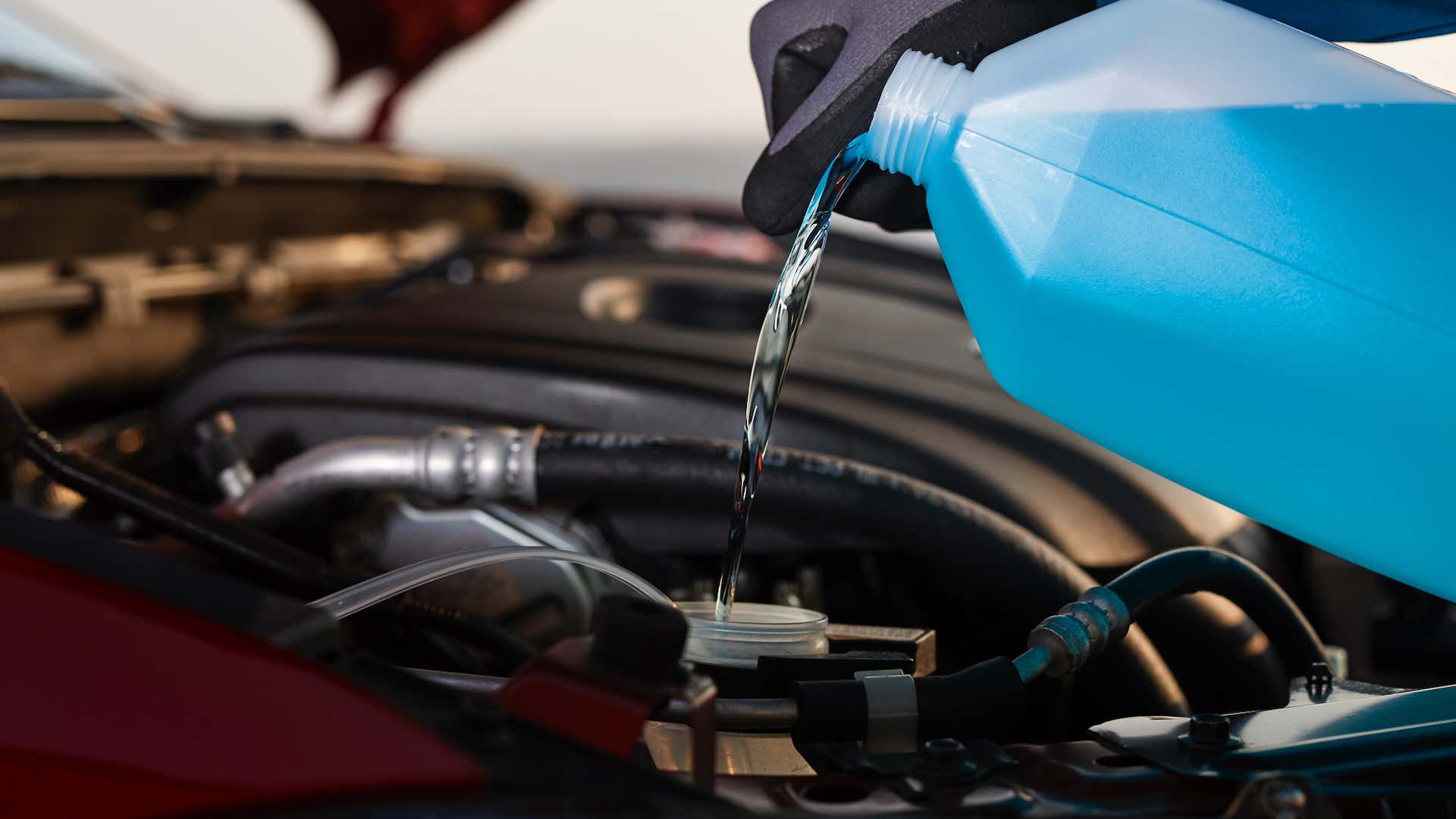 Pay attention when you’re pouring anything into your car’s engine bay.

Everything You’ll Need To Drain and Refill Your Antifreeze

You won’t need many tools to drain and replace your antifreeze, but make sure you have everything on hand before you get started.

Organizing your tools and gear so everything is easily reachable will save precious minutes waiting for your handy-dandy child or four-legged helper to bring you the sandpaper or blowtorch. (You won’t need a blowtorch for this job. Please don’t have your kid hand you a blowtorch—Ed.)

You’ll also need a flat workspace, such as a garage floor, driveway, or street parking. Antifreeze isn’t as harmful to be around as gasoline fumes, but it’s a good idea to work in a well-ventilated area anyway. Check your local laws to make sure you’re not violating any codes when using the street because we aren’t getting you or your ride out of the clink. 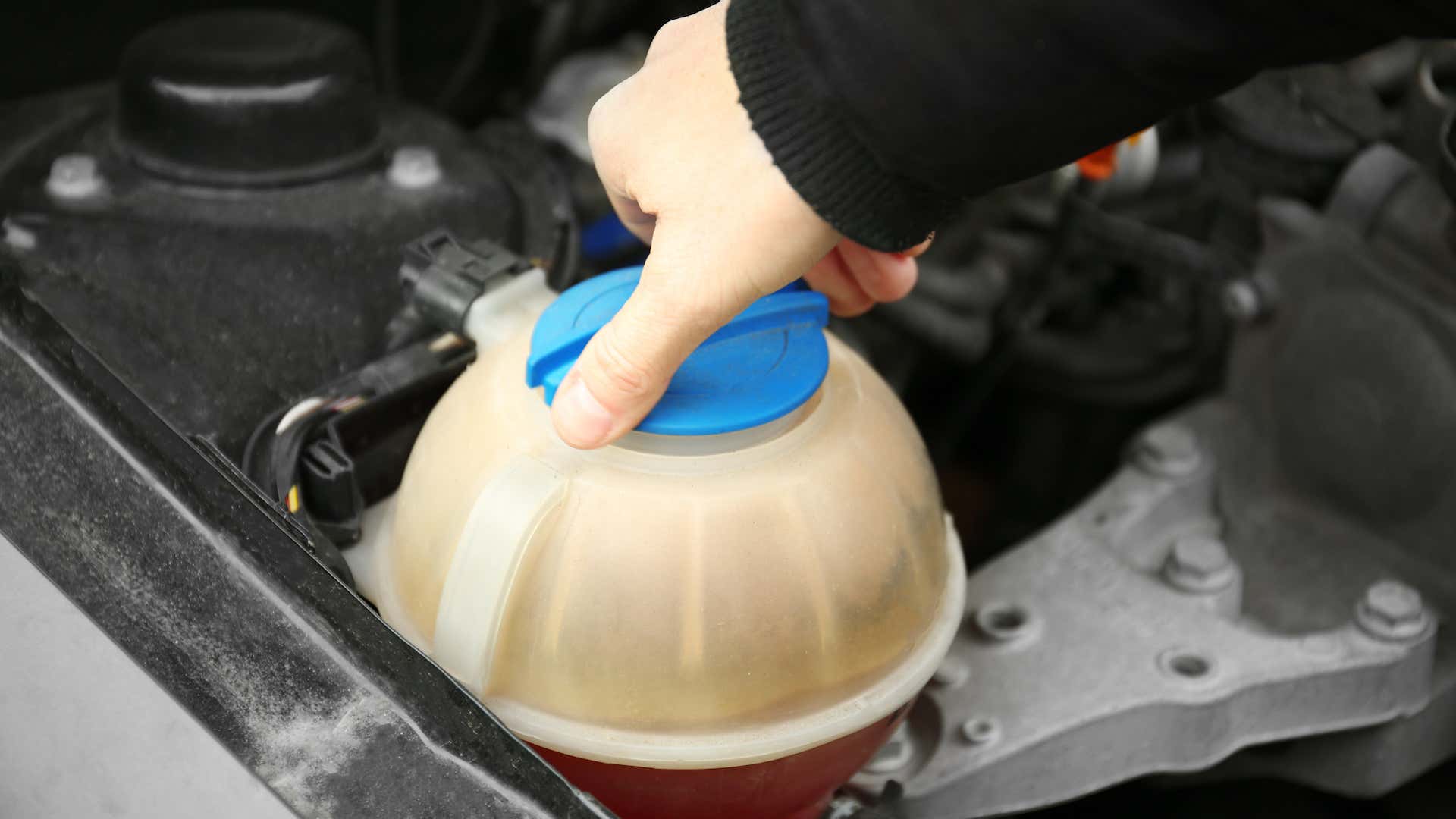 The coolant reservoir will look different depending on the vehicle.

Here’s How To Dispose Of Antifreeze

Let’s start this process by checking your current coolant levels and the condition of the existing fluid.

There’s more to this than the actual fluid disposal. Staying safe during the process is important to your health and that of the people and environment around you.

How to Dispose of Antifreeze Safely

When it’s time to dispose of coolant, you’ll need to make sure that you’re in compliance with state and local laws and regulations. Your town or state should have a waste management department or similar organization whose job it is to manage and regulate hazardous materials like antifreeze, engine oils, gasoline, and even old electronics with batteries that can damage the environment. They can tell you how, where, and when to dispose of antifreeze, and there may even be a special facility in your area where you can drop off those materials.

Some areas have recycling centers that can take old chemicals, and many automotive shops offer a disposal service. There might be a fee for disposal if you go the shop route, but it’s far cheaper than paying a fine for illegally disposing of the stuff at home.

Get Help With Disposing Of Antifreeze From a Mechanic On JustAnswer

Although The Drive’s detailed how-to guides are easy to follow, a rusty bolt, an engine component not in the correct position, or a messy oil leak can derail a project. That’s why we’ve partnered with JustAnswer, which connects you to certified mechanics around the globe, to get you through even the toughest jobs.

So if you have a question or are stuck, click here and talk to a mechanic near you. 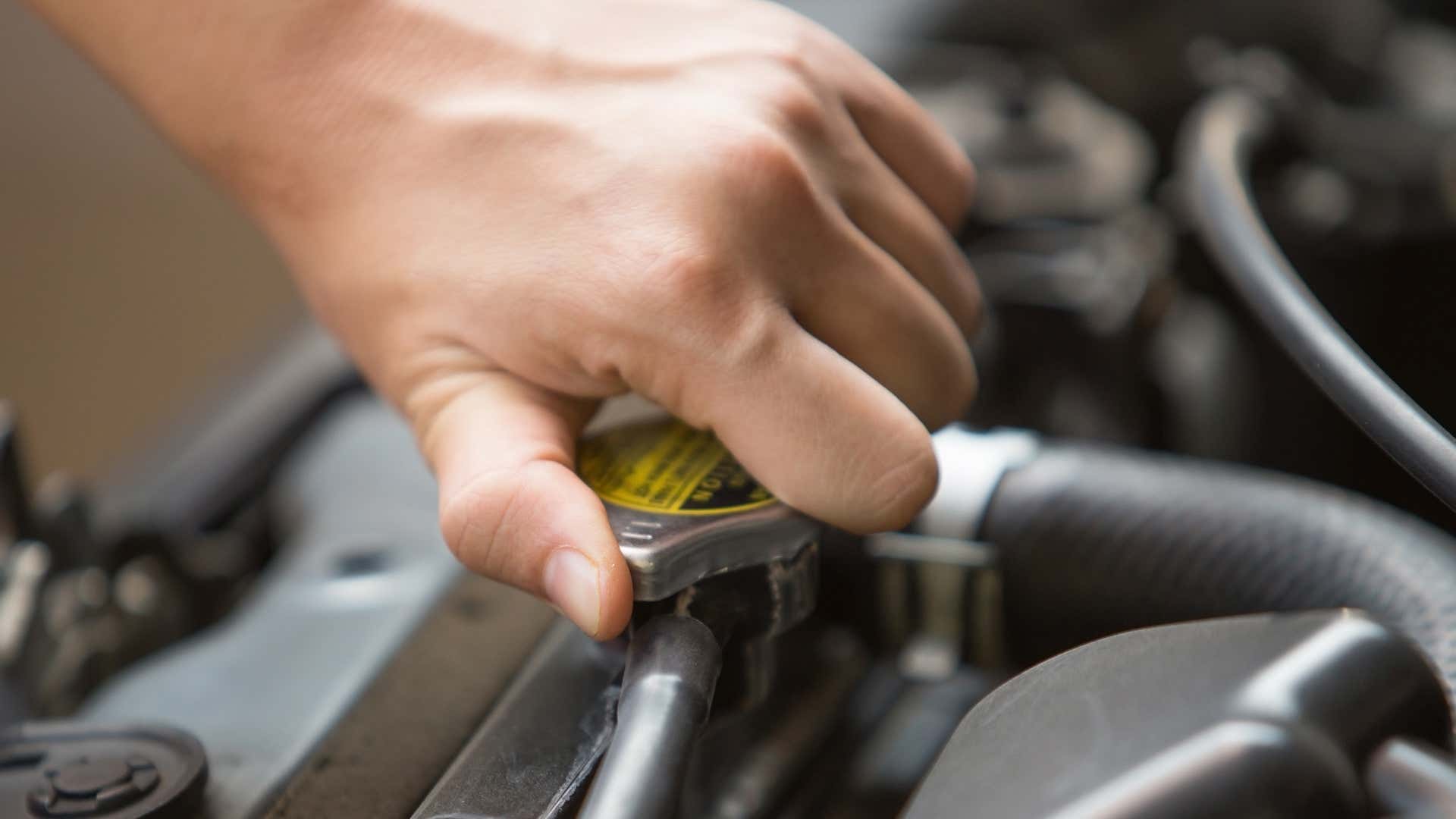 Pro Tips to Dispose Of Antifreeze

The Drive’s editors have done it all, here are our pro tips to dispose of antifreeze.

FAQs About Disposing Of Antifreeze

Q. I Need To Refill My Antifreeze Frequently. Is This Normal?

A. No, it’s not normal. If you find yourself needing to top off the coolant levels regularly, there could be a leak. Keep an eye on the ground where you usually park to check for stains or wet spots that could indicate a leak and get your car to a shop for a checkup as soon as possible.

Q. I Found Cheap Coolant At The Dollar Store. Won’t It Work The Same As The Expensive Stuff?

A. It might, but we won’t be recommending it any time soon. Just like almost everything else in life, you get what you pay for when it comes to antifreeze. Cheap out, and you could be facing problems that cost a lot more than a nice jug of antifreeze.

Q. I’m Stuck on the Side of the Road and Don’t Have Antifreeze. Can I Just Use Water?

A. First of all, we hope that you’re in a safe place before bugging us about antifreeze. The short answer is, yes, you can use water. This should only be done in a pinch to get you to a shop or store where you can purchase the real deal. Antifreeze is more stable and capable of handling extreme temperatures, but water is not. Once it’s past its freezing or boiling points, water is almost useless as an engine coolant.

Let’s Talk, Comment Below To Talk With The Drive’s Editors!

We’re here to be expert guides in everything How-To related. Use us, compliment us, yell at us. Comment below and let’s talk! You can also shout at us on Twitter or Instagram, here are our profiles.