Home » Car Reviews » Horsepower vs Torque: They Aren’t What You Think They Are

Everyone and their mothers know a car’s top two performance metrics are horsepower and torque. They’re littered across every car’s spec sheet, plastered multiple times in its reviews, and bolded and animated in each and every online comparison video known to man. Few, however, truly understand their differences, even as thousands argue which is more important.

Though most can comprehend the general premises of horsepower and torque, their definitions, their history, their applications, the mathematical equations used to find their values, and how and why manufacturers use each, isn’t as well known. And, understandably, searching Google to ascertain those differences can be, well, ridden with potential errors, erroneous details, and old-timey baseball references only Boomers would know. That’s where The Drive comes in.

Thanks to our crack team of info experts, all steeped in an engine’s language and engineering, we’ve concocted the end-all-be-all guide to horsepower vs. torque. We explain not only what each is and how they’re used, but also the different versions of each, and how they relate to speed and acceleration.

We’re even going to answer some questions about Torque, the excellently terrible film about motorcycles from 2004 that ripped off Fast and the Furious. Oh yeah, we went there. 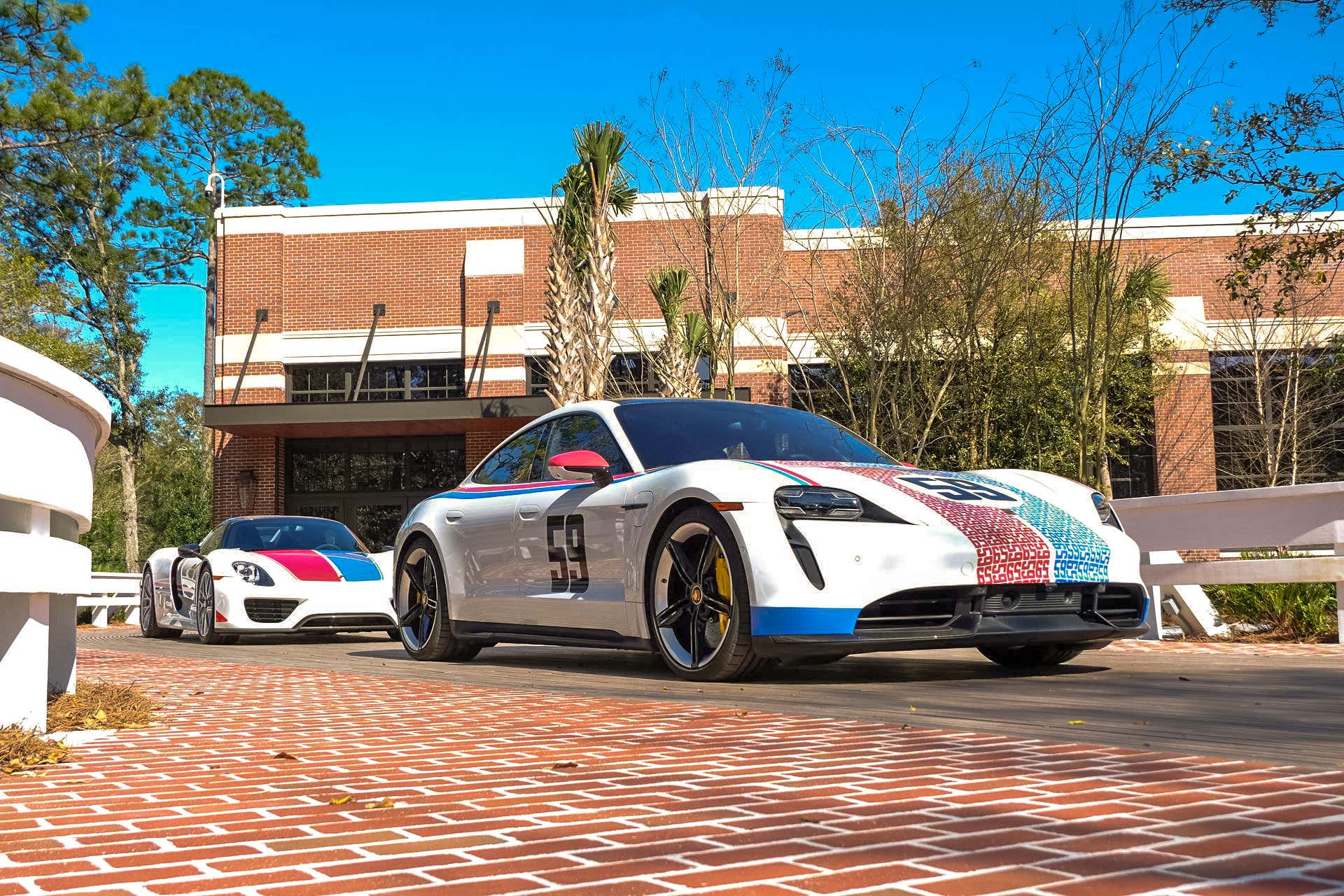 Two types of torque and horsepower.

A horsepower is a unit of measurement used to denote power or the “rate at which work is done” by an engine or motor. This applies to all engines and motors and not strictly internal combustion engines. Your car’s horsepower denotes how quickly that work can be done with more power allowing for quicker work.

Torque is force multiplied by distance. In the case of cars, “the rotational equivalent of linear force.” Essentially, it’s the amount of force applied to an object with a twisting motion, i.e. a motor applying force to a crankshaft, which consequently rotates your tires.

What’s the Difference Between Horsepower and Torque?

The two are very much two sides of the same coin as one goes with the other—torque being the force and horsepower being the rate at which that force is done. The difference is torque is doing the work, while horsepower is how fast that work is being done.

Horsepower and torque, along with where each fall on a vehicle’s engine rotation per minute (rpm) range, as well as gearing, determine the car’s speed and acceleration. 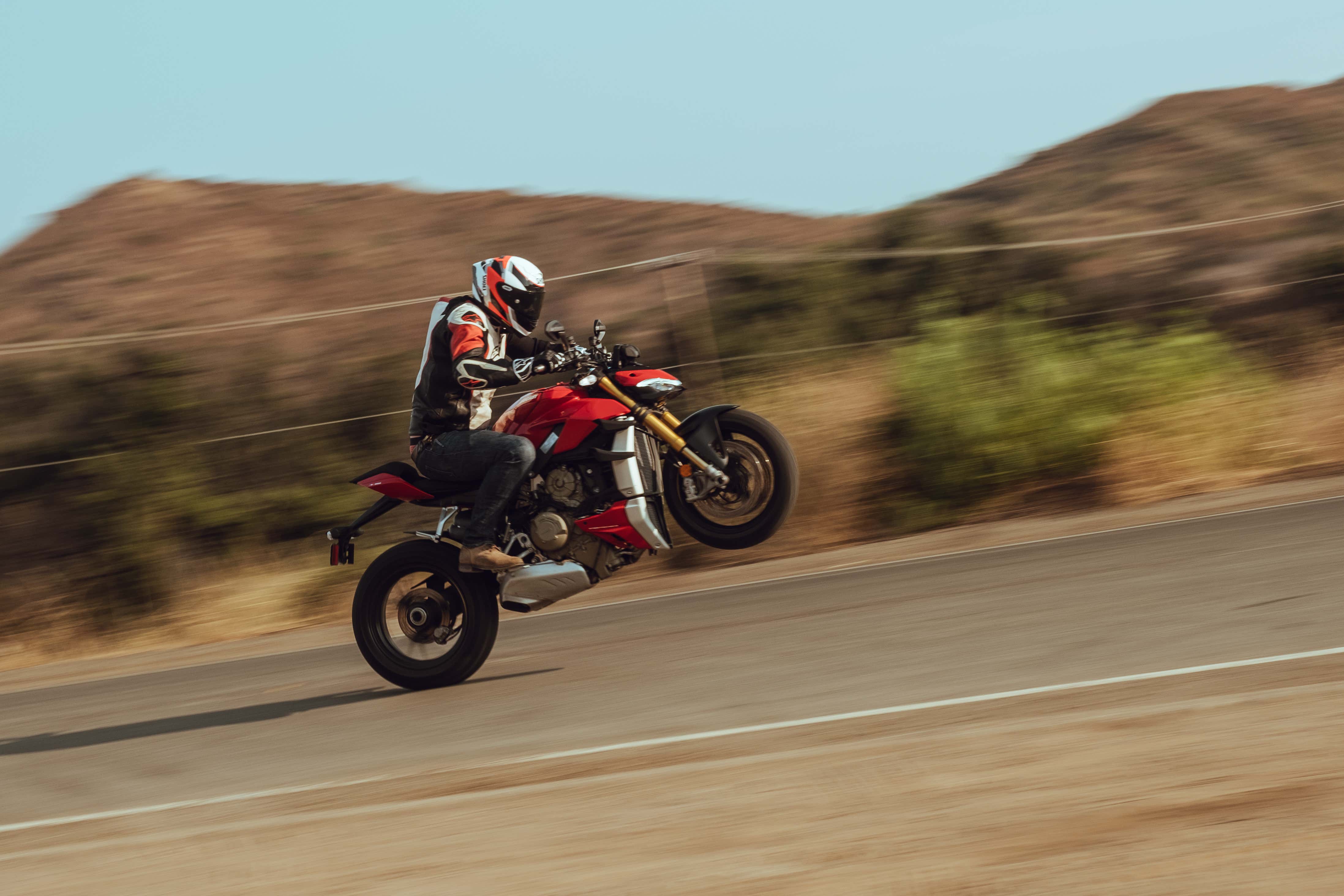 Given their interchangeability in regular conversation, as well as the horsepower vs. torque debate, we thought it necessary to put this issue to rest once and for all.

In automobiles, acceleration means a vehicle’s capacity to gain speed relative to time, i.e. your car’s 0-60 mph figure. That relates to both horsepower and torque

Speed is the rate at which a vehicle can operate, i.e. a car’s speed range. Practically put, a Bugatti Chiron can operate between 1 mph and 261 mph. 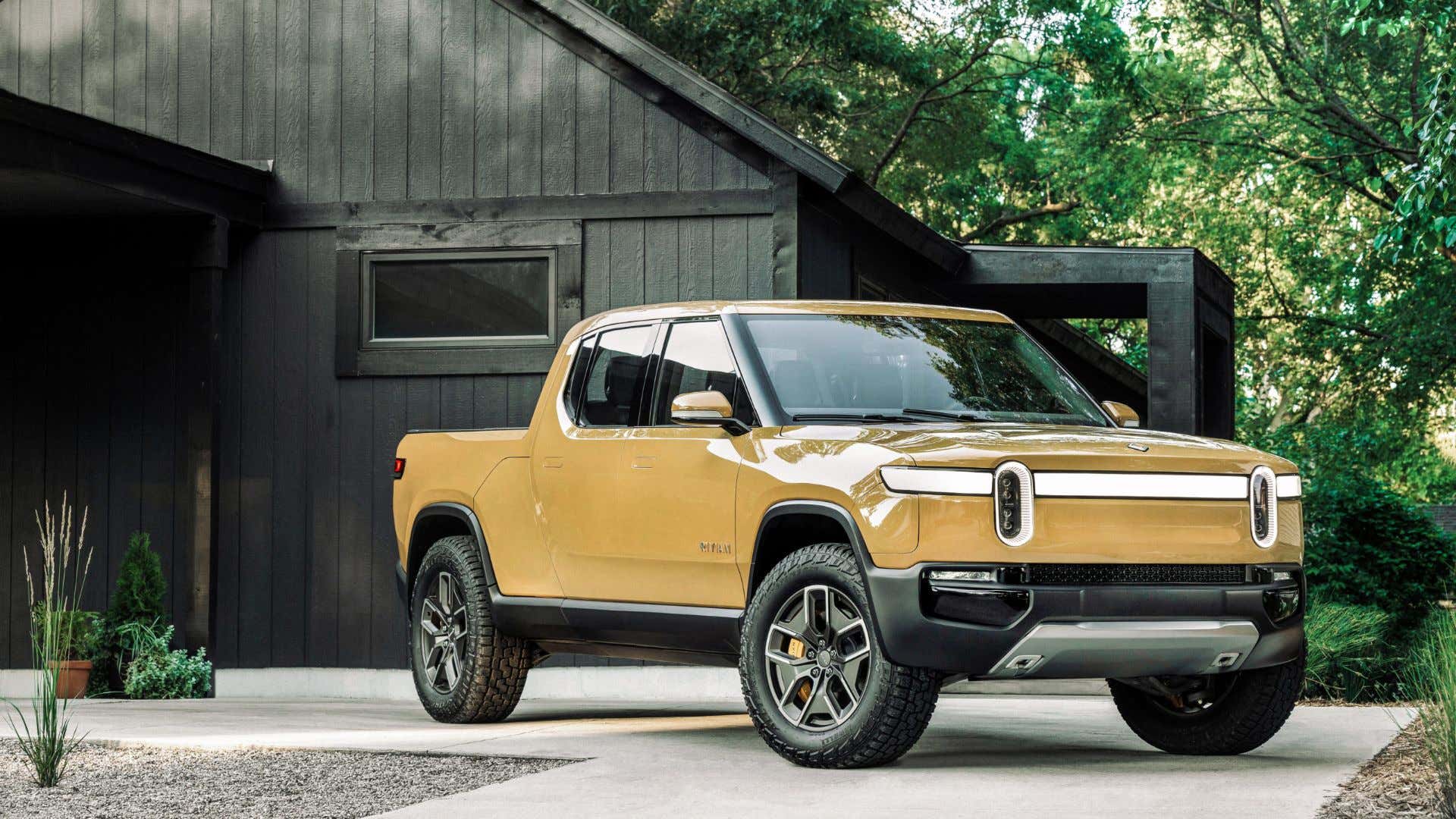 Rivian’s all-electric R1T has a ton of torque and horsepower.

Is More Torque Better For Acceleration and More Power For Speed?

Well, yes and no. The more horsepower you have at your disposal, the faster you’ll be able to push your theoretical car in terms of top speed, i.e. the 1,500-horsepower Bugatti Chiron and its 300-mph top speed. Torque is a little more finicky, as what really matters is where peak torque arrives and how long it’s sustained.

Suppose a theoretical car with 200 horsepower and 200 lb-ft of torque, with the torque arriving at 6,000 rpm, squares off against another theoretical car with 200 horsepower and only 150 lb-ft of torque, this time arriving at 1,500 rpm and staying constant until its 6,500 rpm redline. In this case, the second car would out-accelerate the first, even though it has less torque.

To put more realism into that scenario, compare a drag race between a Bugatti Chiron and Porsche Taycan Turbo S EV. Because the EV delivers its max 774 lb-ft of torque at 0 rpm, it can out-accelerate (2.4 seconds to 60 mph) the 1,100 lb-ft Bugatti (2.5 seconds to 60 mph) because the Bugatti doesn’t hit peak torque until 1,180 rpm. 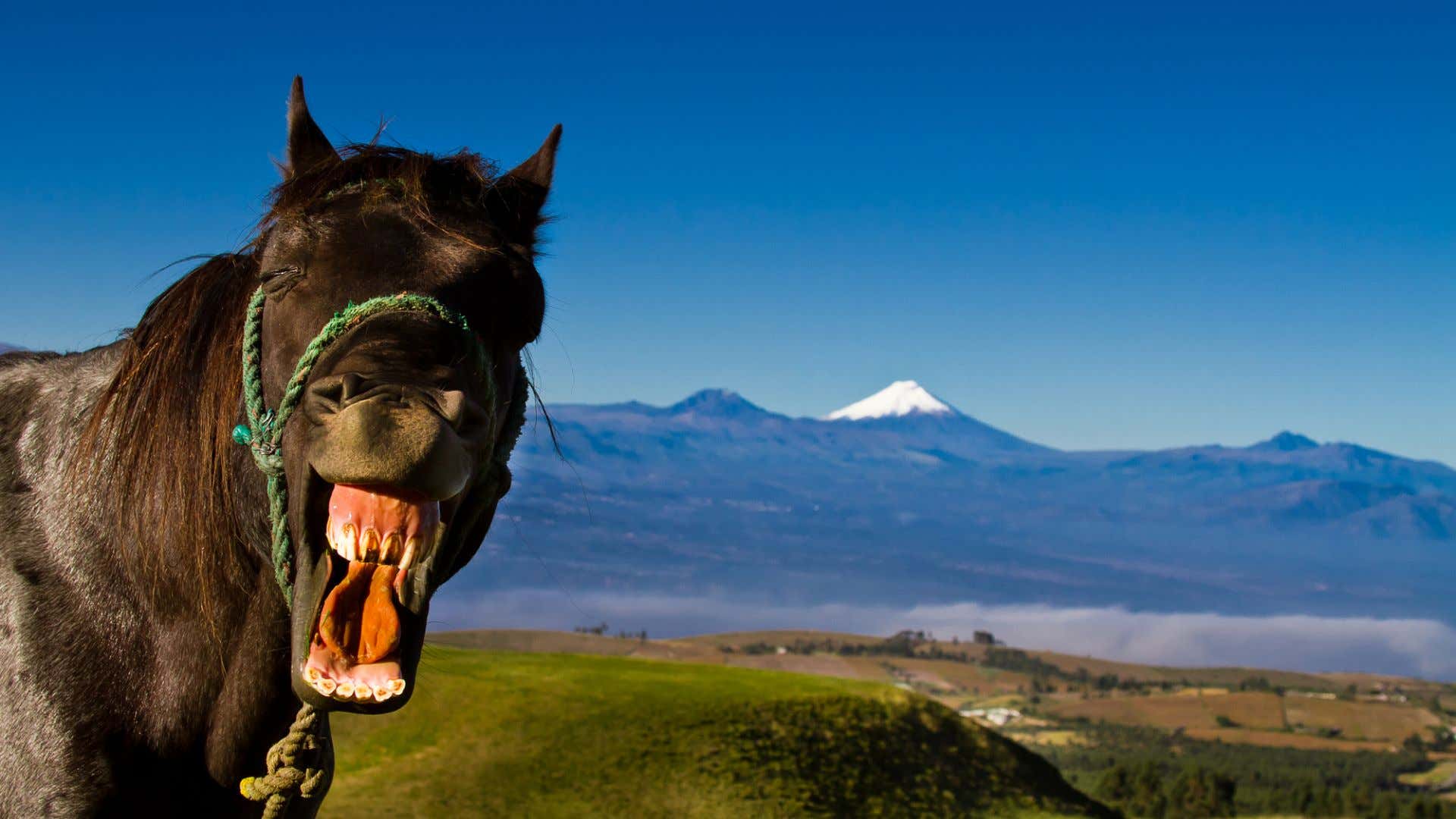 We chose this magnificent beast.

Why Did People Choose Horsepower Over Elk, Moose, or Deerpower?

What are we, Canadian?

But really, horsepower came about as a Scottish engineer by the name of James Watt was looking to compare the output of steam engines and draft horses in order to sell people on his steam power business—yay greed! Observing a horse could turn a mill wheel 144 times per hour, and that the wheel had a 3.7-meter radius, Watt determined the horse could travel 2.4 × 2π × 12 feet in one minute.

Here’s the equation for all you math nerds.

Watt could then apply this formula to his steam engines and determine how much more effective they were compared to the hay-eating, sleeping, big ole pooping horses everyone used at the time. Thus, horsepower was born. Maybe if elk or moose were more available at the time, Watt would’ve used them. 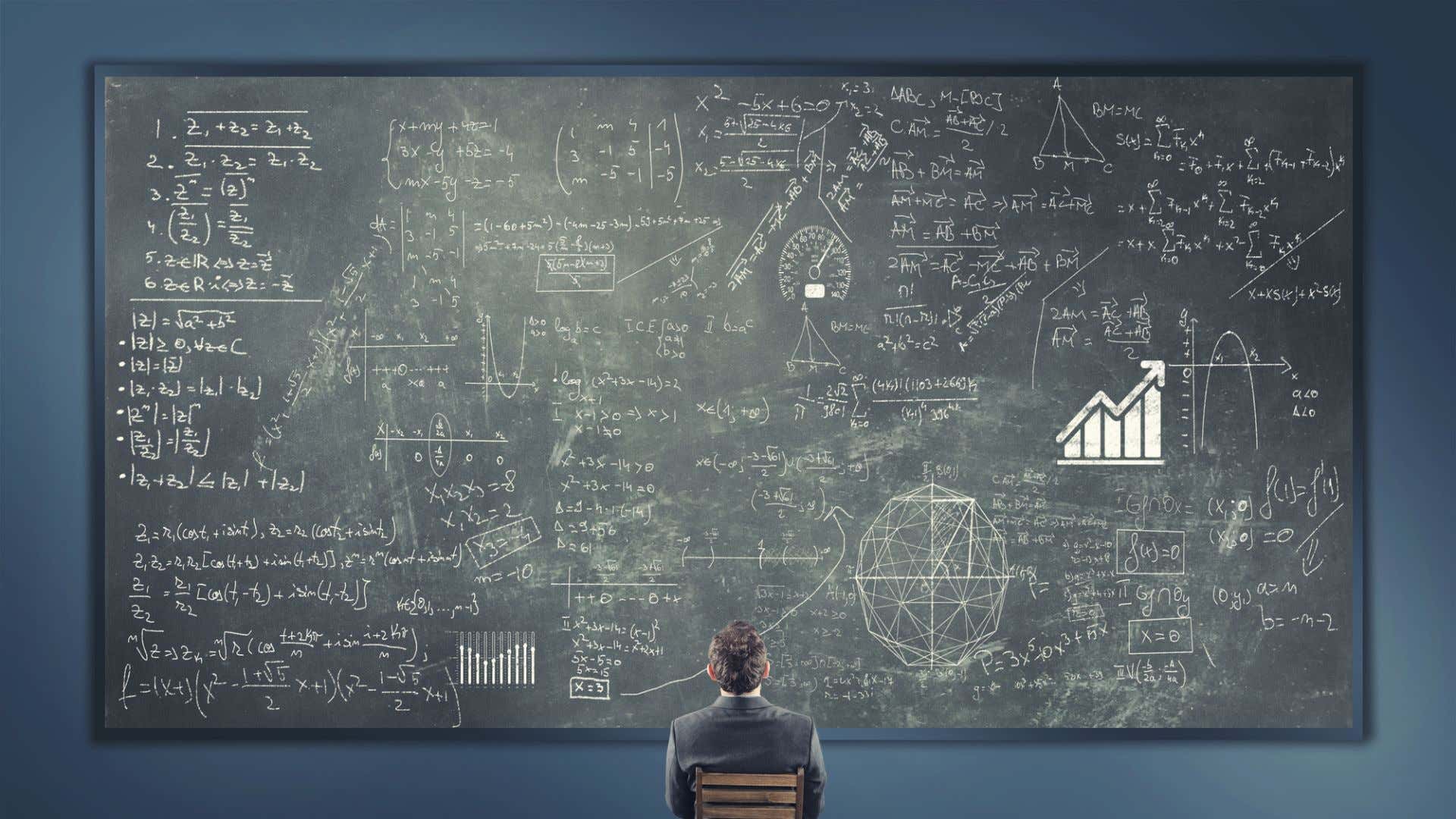 Why Do Some Manufacturers Use Different Numbers to Show Torque?

We live in a globalized world, no matter what some people say, and with that comes different labels and measurements for essentially the same thing—think metric vs. imperial. Torque is no different, with automotive manufacturers using pound-feet (lb-ft), foot-pounds (ft-lbs), and Newton Meters (NM).

A pound-foot is the moment of inertia on an axis that applies one pound of force at a radius of one foot. TL:DR, pound-feet refers to the force applied and exerted by a car’s wheels as it bites the pavement.

The British version of pound-feet, just backward like how they drive on the left side of the road but their cars are right-hand drive. Nothing makes sense there. Foot-pound also refers to a unit of work but has been co-opted by auto manufacturers.

A newton-meter is a unit of torque in the metric system and one foot-pound is equal to 0.73756 newton-meters.

Why Do Some Manufacturers Use Different Numbers to Show Horsepower?

As with torque, there’s differentiation between manufacturer-supplied figures representing horsepower, with the main four being horsepower, brake horsepower, metric horsepower, and kilowatt. Here’s what they all mean and why they’re used.

Horsepower is the most commonly used figure to denote a car’s power and most often relates to how much power a car’s engine develops at the crank of an engine, not at the tires. It’s easy, it’s known, and it looks great splashed across marketing.

Brake-horsepower is commonly used by countries outside the U.S. and denotes the engine’s power at the tires of the car, not at the crank. This is the real output of your car’s horsepower, what it can physically produce at the front, rear, or all four tires.

Here’s the math for you lovers of equations!

Kilowatt is a term our friends down under use most frequently and is actually the most precise measurement of power on this list. It’s also used by every engineer in the world. A kilowatt measures energy transfer over time and results in 1 kilowatt equalling 1.341 standard horsepower. 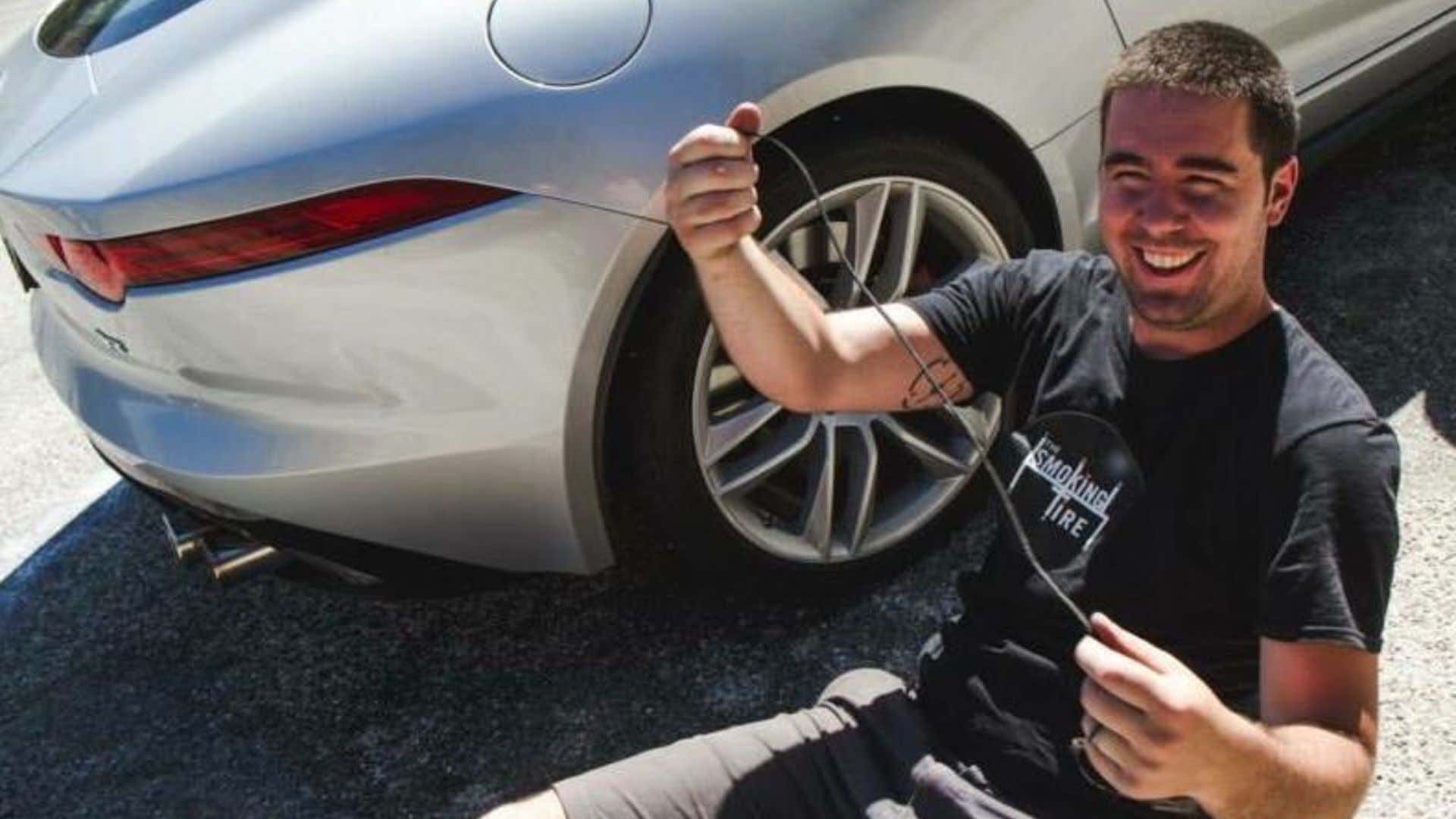 The author showing off what torque and horsepower do together to tires.

FAQs About Horsepower vs Torque

A: Depends on who you ask. For Formula 1 drivers, it’s a combination of both. For rally and off-road drivers, it’s torque. For land-speed racers, it’s all about that top horsepower figure.

Q: Then Why Do Manufacturers Tout Horsepower More Than Torque?

A: Because we’ve been fed a long gravy-train of misinformation about why horsepower is better, because it’s usually the bigger number and better for taglines and marketing. Sales! Now that EVs are hitting the mainstream, expect to be repetitively whacked over the head with torque.

Q: Is Everything I Know About a Car’s Performance a Lie?

A: Not necessarily. Horsepower still matters and is a highly useful metric, there’s just a disproportionate emphasis placed on horsepower. Especially when what you’ll feel when you mash the throttle is mostly torque.

Q: Why Aren’t All Cars Diesel Then? I Know They Have a Lot of Torque.

A: Well, the auto industry tried that, and…yeah. There are still a number of diesel engines around, especially in the pickup market, but there’s some bad blood there. Diesels, like the gasoline engine, seem to be on their way out.

A: They don’t really have more torque than conventional combustion engines, it’s more about the delivery of its performance that people are amazed by.

An internal combustion engine requires fuel, spark, and combustion, things that take time, to create and transmit energy through a driveshaft and to the wheels. For an EV, that power is always ready to be immediately transmitted to the wheels. Think of an EV’s performance like switching on a light compared to lighting a gas-burning stovetop. Instantaneous torque on demand.

Q: Well, Then Is Torque a Good Movie?

A: Depends, do you like schlocky Fast and the Furious rip-offs with motorcycles and a scene where a turbine-powered superbike called the “Y2K” enters warp speed?

A: Then yeah, it’s great. Ice Cube will be pleased.

Let’s Talk, Comment Below To Talk With The Drive’s Editors!

We’re here to be expert guides in everything How-To related. Use us, compliment us, yell at us. Comment below and let’s talk! You can also shout at us on Twitter or Instagram, here are our profiles.

There's a pure EV variant with all-wheel drive. Discontinued in Europe at the beginning of 2017, the Nissan Note represents the company’s best-selling car in the domestic market Japan. The…

The eighth-generation Toyota Camry has received a mid-lifecycle facelift for 2021, after the updated D-segment sedan made its debut for the North American market in July. Shown here is the…
F1

In Stirling Green and costing £200k, the AMR was a tough sell; in Mariana Blue with £60k off, though... By Matt Bird / Tuesday, November 24, 2020 It would be…
We and our partners use cookies on this site to improve our service, perform analytics, personalize advertising, measure advertising performance, and remember website preferences.Ok