After a few complicated races in recent weeks, this week’s new set of GT Sport Daily Races is a return to simpler times. It’s a case of picking how fast a race car you want and heading to the track.

The only complexity comes in Race A. That’s a four-lap event around Brazil’s famous Autodromo Jose Carlos Pace, also known as “Interlagos” for the district of Sao Paulo in which it’s located. Your dilemma will be which of the four front-wheel drive Gr.4 race cars you choose for the race, as the pick and mix format puts in another showing. We’d also recommend one click of traction control for the grid start, and switch it off once you’re up into second gear.

It’s Race B that features the fastest cars this week, in another four-lap race — this time around the grand prix circuit at the Nurburgring. You can pick any of the Gr.2 race cars in your garage for the event. That’s the six Super GT cars, with three from the 2008 season and three from the 2016 season.

This week’s endurance event in Race C features the Gr.3 race cars. You’ve got free choice from the myriad options in the game to tackle the ten-lap event around the reverse version of the fictional Autodrome Lago Maggiore circuit, in full-fat GP layout.

Unlike recent weeks there’s no frippery here; there’s no DRS, or false start checks to worry about, and no mandatory tire to concern yourself with. In fact the single-digit tire wear multiplier will mean no pit strategy of any kind — and all three races use racing hard tires.

These three races will run through to Monday, October 26th, when another new set of three will replace them. 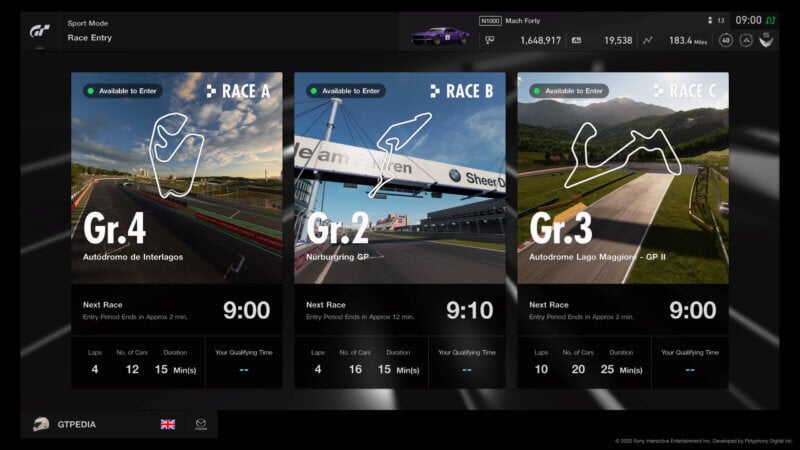