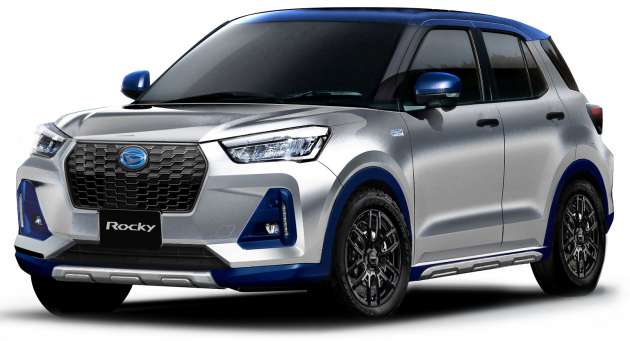 Daihatsu has revealed its exhibits for the 2022 Tokyo Auto Salon, which is happening from January 14 to 16 at the Makuhari Messe. The small car specialist is bringing four concepts to the show, all based on its latest models – including the Rocky e-Smart Hybrid that was launched in November.

Two variants of the petrol-electric crossover will be on display. The Premium Version is meant to be a “cool premium compact SUV that suits the city” and gets glittering silver paint and blue exterior highlights. The latter adorns the roof, door mirrors, front fog light surrounds and even the body cladding. There are also black wheels wrapped in Toyo Open Country all-terrain tyres, along with silver skid plates.

For a more rugged look, you can turn to the Crossfield Version, which gets these highlights in black as well as a black grille surround. Adding to the outgoing aesthetic are the roof rack, yellow fog lights, mudflaps and fatter tyres with white lettering, as well as what appears to be a raised ride height. Are you getting any ideas for modifying your Perodua Ativa along those lines?

To recap, the e-Smart Hybrid is powered exclusively by a 106 PS/170 Nm electric motor, with the WA-VEX 1.2 litre Atkinson-cycle three-cylinder engine acting solely as a generator (a range extender of sorts). That mill produces 82 PS at 5,600 rpm and 105 Nm of torque from 3,200 to 5,200 rpm. Daihatsu claims a combined fuel consumption figure of 28 km per litre on the WLTP cycle. 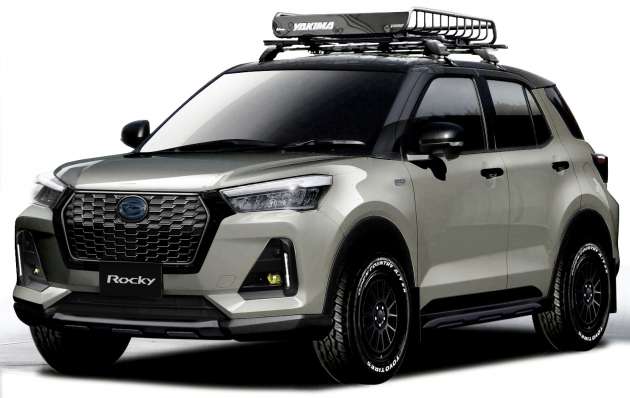 Will Perodua introduce the system on the Ativa? It seems likely, given that we’ve already seen spyshots of the Rocky version in Malaysia – even before its Japanese launch. The company has already confirmed that it is conducting a market study on such a vehicle and has recently sided with Toyota on the eco-friendliness of hybrids vis-à-vis electric vehicles.

The other two concepts are based on the recently-unveiled Hijet kei van, now in its 11th generation. They are both derived from the Atrai passenger variant, with the Premium Version continuing the theme set by the Rocky with black exterior highlights, vertical LED daytime running lights and large two-tone alloys.

More interesting is the Camper Version, based on the new Atrai Deck Van, a ridiculously cute mini pick-up. It gets a beefier front end with a black grille, black front cladding and driving lights, along with a roof-mounted light bar, black wheels shod in off-road tyres and searing orange paint with hexagonal body graphics. The highlight, however, is the rooftop tent that gives the car its name.

The Hijet and Atrai are the first commercial vehicles built on the Daihatsu New Global Architecture (DNGA). Boxier than before to maximise cargo room, they feature a new CVT developed specifically for rear-wheel-drive applications (likely related to the D-CVT used in the Ativa and Myvi) and, for the first time, infotainment touchscreens with Apple CarPlay and Android Auto connectivity.

As befits kei car regulations, the two models are powered by 658 cc three-cylinder engines. The naturally-aspirated version produces 53 PS and 60 Nm of torque, whereas the turbocharged mill churns out the maximum allotted 64 PS and 93 Nm. Options include a five-speed manual gearbox and all-wheel drive.

Aside from the four concepts, Daihatsu is also showcasing the Copen‘s Dress-Formation quick-change body panels using the sports car’s front clip mounted on a Hijet Truck. Additionally, the company is bringing along every generation of the Hijet since its 1960 introduction to celebrate the Good Design Long Life Design Award bestowed onto the van in October.