It’s been a standing rule ever since man started putting doors on cars, if an automobile has more than two doors it’s going to look stodgy and if it’s a four-door station wagon think beyond stodgy—it’ll be orthopedic-shoe ugly.

That was the 20th century and the rules have changed a lot since then. In fact, there aren’t any rules anymore. Take for example Dan Taylor’s 1966 Dodge Polara station wagon, fully restored and customized by Hot Rods & Custom Stuff of Escondido, California. The saga of Dan’s Dodge wagon starts out in reverse, with his son buying it for his first car, a surf wagon to drive to high school and ultimately transportation to college. The pass from son down to father—having the Dodge parked in his driveway for six years—spawned a vision in Dan’s mind of how the 1966 wagon could look with the right touches. Dan’s wife, Amy, agreed to the project if she could be in charge of paint colors and interior design.

Randy Clark, owner of Hot Rods & Custom Stuff (HR&CS), planned to keep the exterior of the 1966 Polara wagon relatively stock appearing, but underneath he had big plans to update the Dodge into a 21st century hot rod surf wagon. The Chrysler Corporation wasn’t the first American car company to switch from body-on-frame construction to unit construction, but they were among the pioneers. 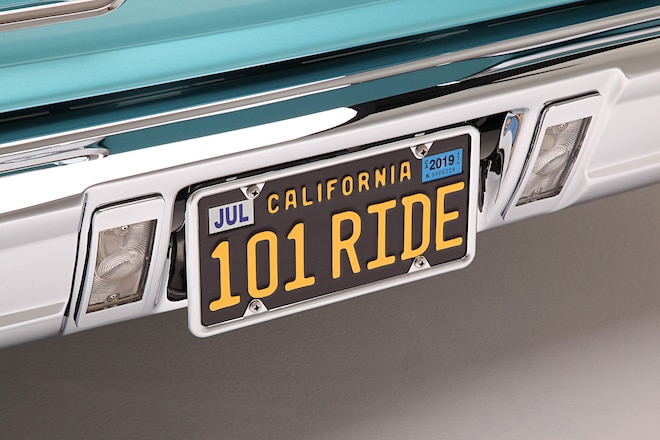 So much for automotive history. Jeremy Shelton at HR&CS told STREET RODDER the first major component ordered for the wagon was a Morrison GT Sport chassis originally engineered for 1959-1964 Chevrolets with a 119-inch wheelbase. To complete the process of converting a unibody car into body-on-frame construction the stock floors were cut out and new floorpans fabricated and fitted. Made to order, Morrison added 2 inches, bringing the wheelbase up to 121 inches, and made modifications to the framehorns to better accommodate the original Dodge bumpers. The Dodge bumpers didn’t remain stock; Shelton narrowed the width and shaved the carriage (bumper) bolts before shipping them to Advanced Plating, along with the grille and related trim for chrome plating.

In 2018 HR&CS debuted the 1966 Dodge wagon in Building 4 at the Grand National Roadster Show (GNRS) in under-construction form. It was opening the kimono, so to speak, as GNRS spectators were able to ogle every perfectly painted part of the Dodge’s body where it shows and where it has since been covered up. All performed in-house at HR&CS, the Polara wagon was refinished in PPG products from start to finish. 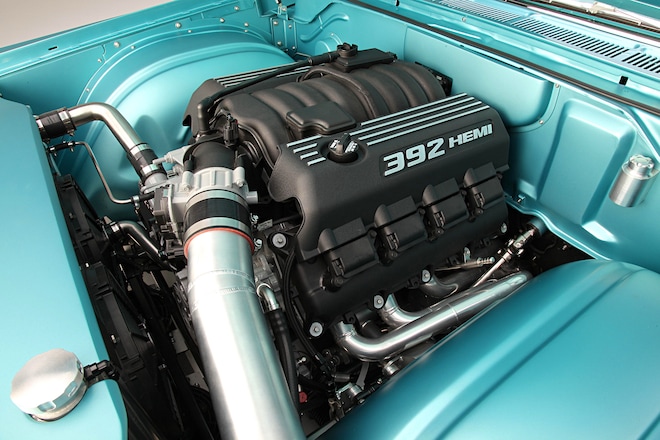 Multi-award-winning painter Andy Meeh sprayed the exterior, excluding the roof, in PPG Tropical Lagoon, a pretty metallic turquoise color with an authentic ’60s vibe. The roof is finished in PPG Dover White. The original gas cap was replaced with a Hagan gas door and leads to a 20-gallon stainless steel gas tank fabricated by HR&CS.

The factory-installed two-barrel 383 with a Torqueflite was yanked and beneath the hood Dan’s Polara wagon remains Mopar powered but updated to match the sophistication of its AME GT Sport chassis with a 2018 392-inch Hemi crate motor. HR&CS custom-fabricated 1-3/4-inch stainless-steel headers that exit into 2-1/2-inch stainless-steel exhaust pipes with dual turbo mufflers. A Holley Dominator EFI complete system with a K&N air filter supplies precise fuel delivery. The Lokar-shifted automatic overdrive transmission is a Silver Sport Transmissions A41 mated to the 392-inch Hemi using a CNC-milled Silver Sport adapter.

To complement the wagon’s PPG Tropical Lagoon exterior, Amy’s interior design expertise combined with Dan’s profession as a flooring contractor came into play when the wagon was sent to Ron Mangus Hot Rod Interiors. We called Mangus and learned the hides are Italian leather and got a behind-the-scenes description of the exotic Swedish-made polypropylene material used for the three-seat model’s cargo deck. For heat and soundproofing, HR&CS sprayed Lizard Skin ceramic and then Mangus padded the floor and laid Atlas Mills turquoise cut pile carpeting. The bucket seats are late-model Chrysler 300 and the console is from a 1968 Dodge Charger. 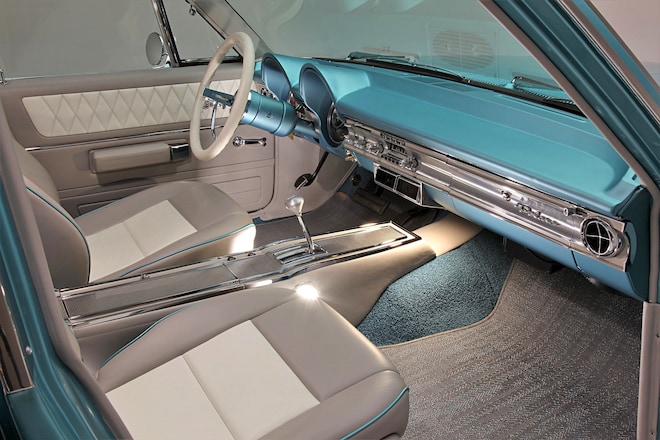 Leaving the exterior intact with 1966 patina was Dan’s original intention with just upgrading the brakes, engine, and transmission so he and Amy could cruise the California coast in modern comfort without mechanical concerns. The project went way overboard in the exterior and interior design department, ultimately creating a show car, but that hasn’t kept Dan from driving the Dodge. He’s already hitting the local cars and coffee scene and the couple plans to take a Northern California road trip in the very near future. 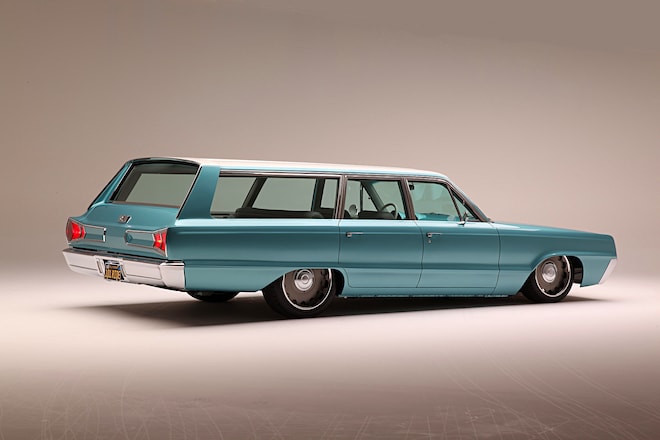