Like any devoted muscle car enthusiast, Jim Hawthorne constantly scans his surroundings for anything interesting. Back in 1978 he was motoring along a New Jersey road when, in his peripheral vision, he spotted a 1969 Buick GS hood leaning against a garage. The Buick lover stopped to ask whether the hood was for sale, and the owner said it was not because he had the car it came on. The car wasn’t for sale either, but Jim left his name and number just in case.

To his surprise, a few weeks later the Buick’s owner called to say he’d sell it because he “had a hot date that weekend and needed the money.” They agreed on a price for the deteriorated but complete GS over the phone, and Jim actually saw the car for the first time when he picked it up. He was surprised and excited to see the many special parts that were with the car, including Hurst wheels, various Motion Performance and Hurst-Equipped emblems, large-valve 1969 400 heads, a Fly Eye air cleaner, Mickey Thompson long-tube headers, a Stage II camshaft, and sn 8,000-rpm tach mounted in the four-speed Buick consolette.

Jim was interested in knowing more about the car’s origins, so the seller gave him the name and address of the previous owner. The seller also mentioned that the car appeared in a movie. Jim later went to visit the previous owner, who also said it was in a movie and that he’d bought it from someone who worked for the studio. After acquiring that individual’s name and address, Jim spoke with a man who said it was his son’s car, his son had died, and he didn’t want to talk about it further. 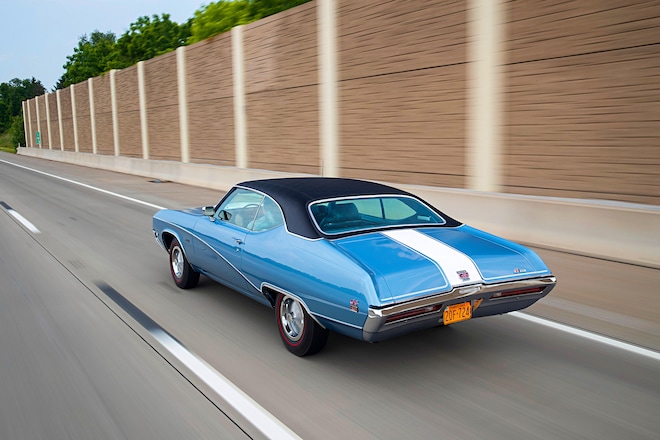 After hitting this roadblock, Jim didn’t do anything further to document his unusual GS until 2002, when he contacted Motion Performance owner Joel Rosen, who told Jim that he remembered two Buicks going through his shop. He specifically recalled these cars because it was so unusual to see Buicks there. One was a blue 1969 or 1970 model, the other a yellow or brown 1970-1972 model. After looking through his archive, Joel sent Jim a letter stating, “We have searched our available records, and although we cannot find the actual work orders, we feel quite certain that your vehicle was worked on and modified in our service department and according to Motion’s specifications. Good luck and enjoy your special Buick.”

Around the same time that he got in touch with Joel, Jim also contacted GM of Canada. Fortunately, his GS was built in the Oshawa assembly plant and, as such, the original build records were available to show exactly how the car was equipped and which dealer sold it.

When Jim bought it, the car was less than 10 years old and extremely original, but it needed a comprehensive restoration. With the goal of one day doing that, he immediately began accumulating parts. Two things that weren’t available at the time were correct reproduction seat covers and door panels, but fortunately the unusual GS still had its originals, and they were undamaged. That led to a mutual friend named Bill Jennings introducing Jim to Duane Heckman. Duane owned Classic Car Interiors, a manufacturer of reproduction interiors, and he was interested in developing a line of correct Buick Gran Sport seat covers and door panels. “I used the original seat covers and door panels from Jim’s Motion-equipped car to create the heat-sealing dies for the 1969 GS Deluxe interior,” explains Duane. “We made up the seat covers, and I personally installed them on the frames. These were the first set of 1969 Buick GS seats ever produced, and that was over 30 years ago.”

As a result of the seat cover project, and their shared love for Buick muscle cars, Jim and Duane developed a lasting friendship. Over the years, Duane and Bill Jennings helped Jim accumulate parts for the Motion-equipped Buick’s eventual restoration, but the majority of the car remained untouched. With the realization that he would likely never get to it, Jim consigned the Motion-equipped GS to an auction in 2018. Duane and Bill spent three weekends helping him gather up all of the parts for the car, and then worked with the auction company to set everything out as a display in order to get as much money for Jim as possible.

When the auction day arrived, Bill made Duane an offer he couldn’t refuse. “Jim never really got to finish his vehicles,” recounts Duane, “and Bill wanted to see one get done, for Jim’s sake. He knew of my involvement with Buicks, and my interest in this particular car, so on the day of the auction he approached me and offered to throw some money into the pot toward purchasing the car. I knew what I could afford to spend, and with Bill’s help we figured we’d at least be in the running. When the bidding finally stopped it was exactly at our limit and we got the car.”

Buying the one-of-a-kind Buick began a quest to get it fully restored as soon as possible. “Jimmy’s health has not been good for a long time,” explains Duane, “so I felt pressured to get the car done as quickly as we could so he could ride in it. The problem with getting it done in record time is that I’m an originality nut, and everything had to be as close to perfect as we could get it when it was finished.”

The car was sent to Nick Serwo’s shop, Ivyland Collision and Custom Restoration, in Warminster, Pennsylvania. “Although Nick has worked on many different brands of muscle cars, he knows more about 1969 Buicks than anyone I know,” says Duane. “I did as much as I could with putting together subassemblies and getting them to Nick, but he did all the metal work, paint, and assembly, and he built the motor.”

As work progressed on the car, many individuals in the tightknit Buick community helped Duane out. “The members of the V8Buick.com website helped me find parts for the car and either sold them at ridiculously low prices or gave them to me for free,” explains Duane. “There were tons of guys there who wanted to help with putting together such a special car, and they really came through for me.” 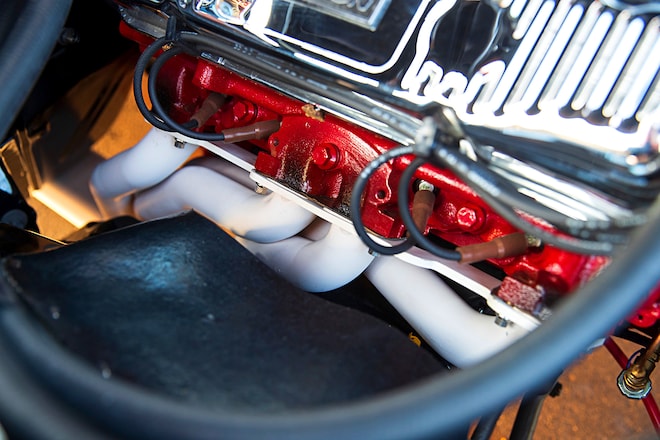 Duane also singles out his friend Gene Hill as someone who went above and beyond to help get the car finished. “He not only gave me a bunch of much needed parts for the car, but also took the time to deliver many of them.”

In addition to everything that Nick Serwo did, Duane relied on a number of other businesses for both services and parts. “Then & Now Automotive Restorations did numerous things, including replating some of the pot metal pieces, like the hood inserts, grille surround, and door handles, and ANJ Automotive Upholstery installed a new headliner and vinyl top. I purchased a lot of the needed parts from Legendary Auto Interiors, Ames Performance, Cars, Inc. in New Jersey, and DC Muscle Cars.”

Duane’s goal from the start was to restore the Buick to the same configuration it was in when it rolled out of Motion Performance. His best reference for that was the car as it was found by Jim in 1978, completely unrestored but mostly intact. “The unusual white body stripe was still there over the original light blue metallic paint, and most of the special parts that Motion equipped the car with were still in place when Jim bought it,” explains Duane. “These included the Hurst wheels, factory Stage II cam, Mickey Thompson long-tube headers, 400 heads with oversize valves, Fly Eye air cleaner, Motion Phase III ignition, and added gauges. And there were good clues for the few things that were missing. For example, the 1969 chrome valve covers had small rectangular glue spots that matched up exactly with the Motion emblems they typically put on the valve covers. A rectangular glue mark over the GS trunk lock emblem also exactly matched the Motion emblem.” 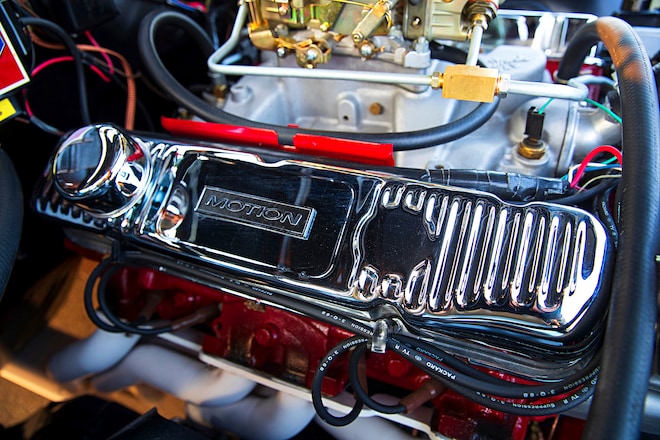 The car was completed in May 2019. In addition to driving it regularly, Duane plans to show it at several major events this year, including the Radnor Hunt Club Concours d’Elegance, GS Nationals, Cecil County Dragway GSCA show, and MCACN show. “I’m looking forward to getting it out so people can see it and learn its story,” he says. “I’m also looking forward to showing it to the many guys who helped with finding the parts and information that was needed to restore it. They were a tremendous help, and I could not have done it without them.” 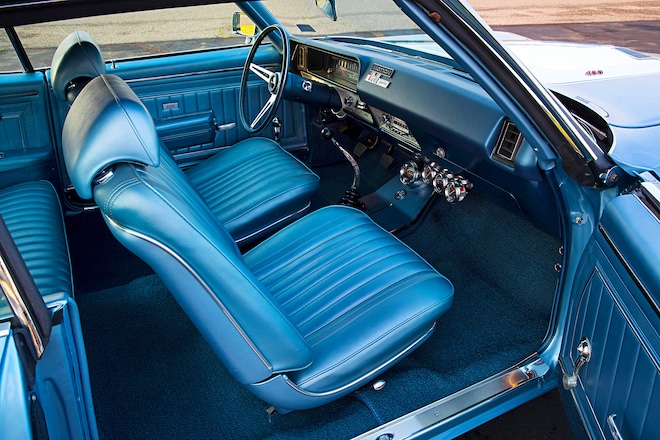 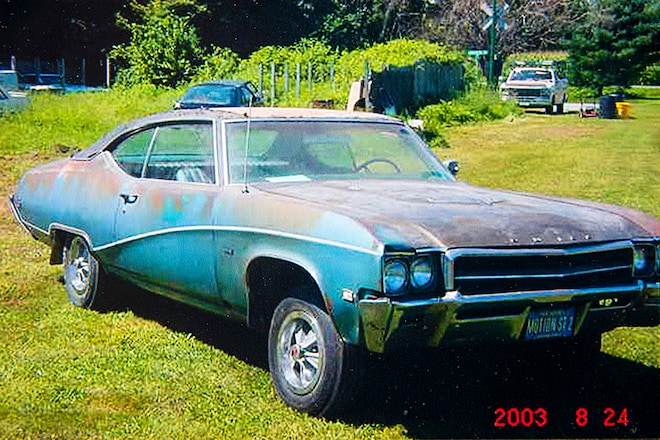 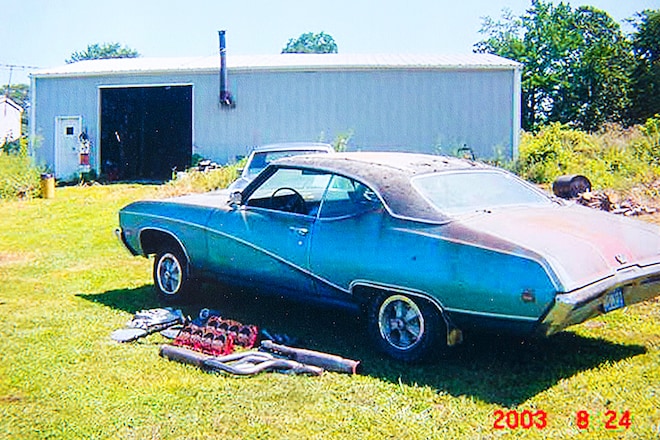 Rare, Even Then
As found in 1978, this rare Buick GS still retained its original paint and day-two modifications, including beautiful Hurst wheels. Purchaser Jim Hawthorn also got a treasure trove of spare parts with the car, including several sets of heads, headers, and intake manifolds. 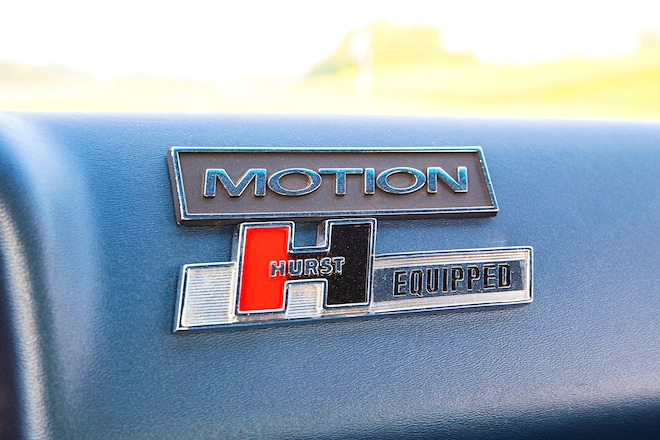 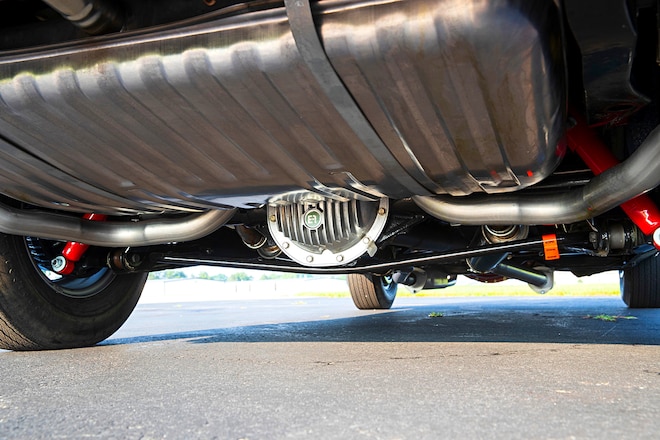 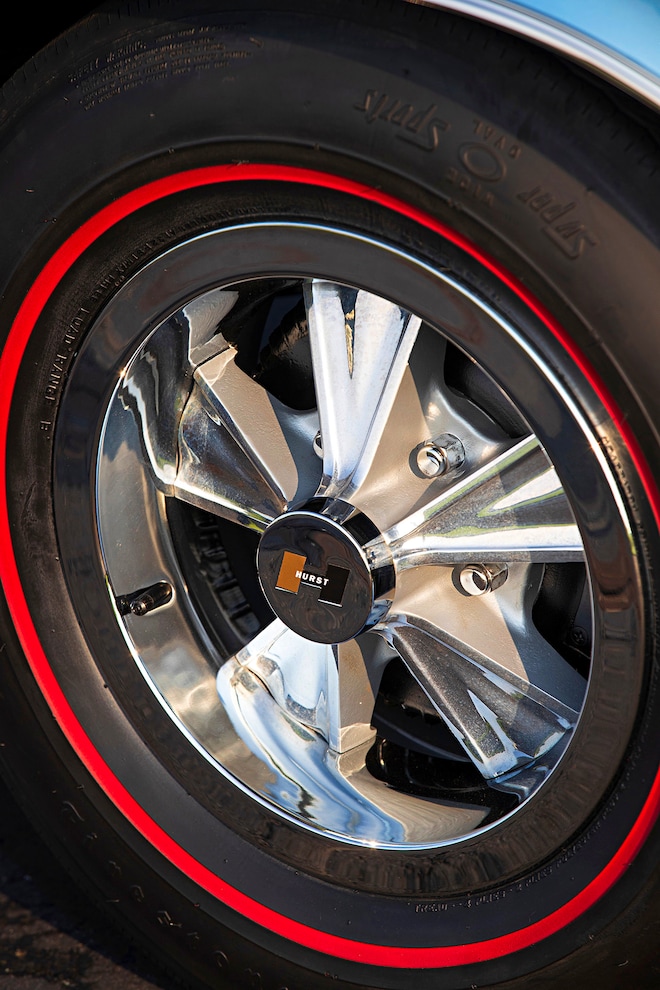