SUVs have become one of the most favourites of segments and supercar makers coming up with SUVs is enough to substantiate this fact. After Lamborghini came up with the Urus, Aston Martin is gearing up to launch DBX which will be unveiled in a few months. A test mule of the DBX has been spotted testing with a trailer hooked to its rear. The sides of the red box have the “Taylor Dynamometer” lettering, which is a Milwaukee-based company offering engine and chassis dynos, along with towing dynamometers like the one the DBX was hauling around. So we can safely assume that Aston Martin was testing the engine on different parameters. 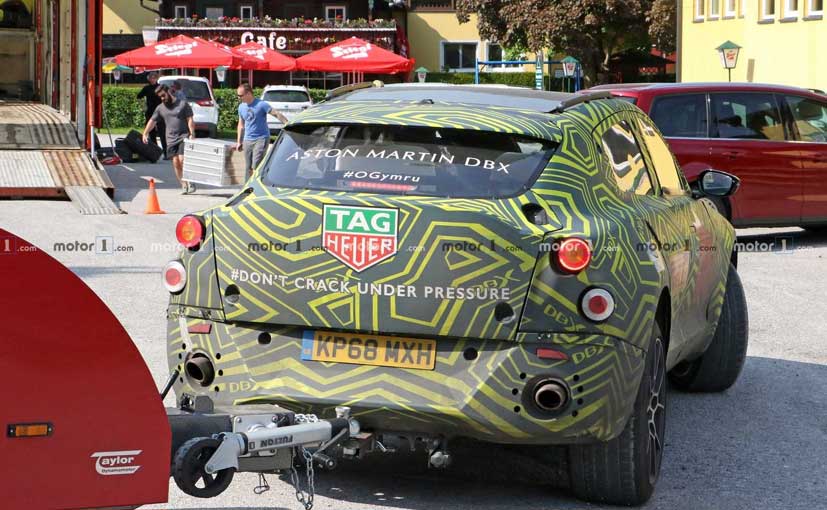 The Aston Martin DBX will be powered by an AMG sourced 493 bhp, 4.0-litre, twin-turbo V8 motor.

The Aston Martin DBX will be powered by an AMG sourced 493 bhp, 4.0-litre, twin-turbo V8 motor. The company is also expected to offer the DBX with its in-house V12 engine sometime later and a hybrid variant with improved low-end torque is also under evaluation. The spy pictures also show a roll cage at the rear and some extra hardware on the rear seat which simulates the added weight of the rear passengers. Since it’s still a prototype, production-ready elements like final taillights and the flush rear door handles are missing at the rear. On the inside as well, the cabin is far from being what you’ll see in a productions version of the DBX. However, the Mercedes switchgear is apparent all over the cabin and that’s quite obvious since the DB11 gets a lot of equipment from Daimler. The test car is equipped with racing front seats but they are unlikely to be found on a production model. The Aston Martin DBX is expected to be unveiled at the Frankfurt Motor Show in September.