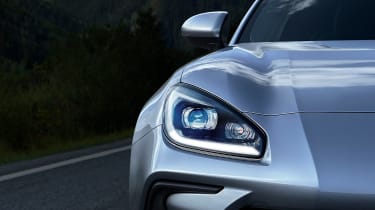 Subaru has provided some substance to the recent claims that a second-generation BRZ is on the way. An official teaser offers our first glimpse at the new model, which is expected to go on sale next year.

The teaser image shows the front quarter of the new BRZ, which looks set to adopt a new projector headlight, with a C-shaped daytime running light. There’s a more sculpted bonnet, while the front bumper intakes appear wider than before. Finally, the brand’s teaser video shows the car will adopt new intake vents behind its doors.

Engine details are still under wraps, but the BRZ will be built in conjunction with the next Toyota GT 86. Both cars could use the 2.0-litre four-cylinder engine used in the GR Supra for the Japanese market, which in its most powerful state of tune, develops 255bhp and 400Nm of torque.

Toyota and Subaru also recently agreed to co-develop a new all-wheel-drive battery-electric SUV, tasked with rivalling the likes of Volkswagen ID.4 and Tesla Model Y. The brands stated that both of these business arrangements will further “develop and strengthen” their long-term partnership. Toyota has also increased its stake in Subaru by 3.17 per cent, upping its overall ownership of the brand to 20 per cent.

Are you excited for the second-generation Toyota GT86 and Subaru BRZ? Let us know in the comments section below…