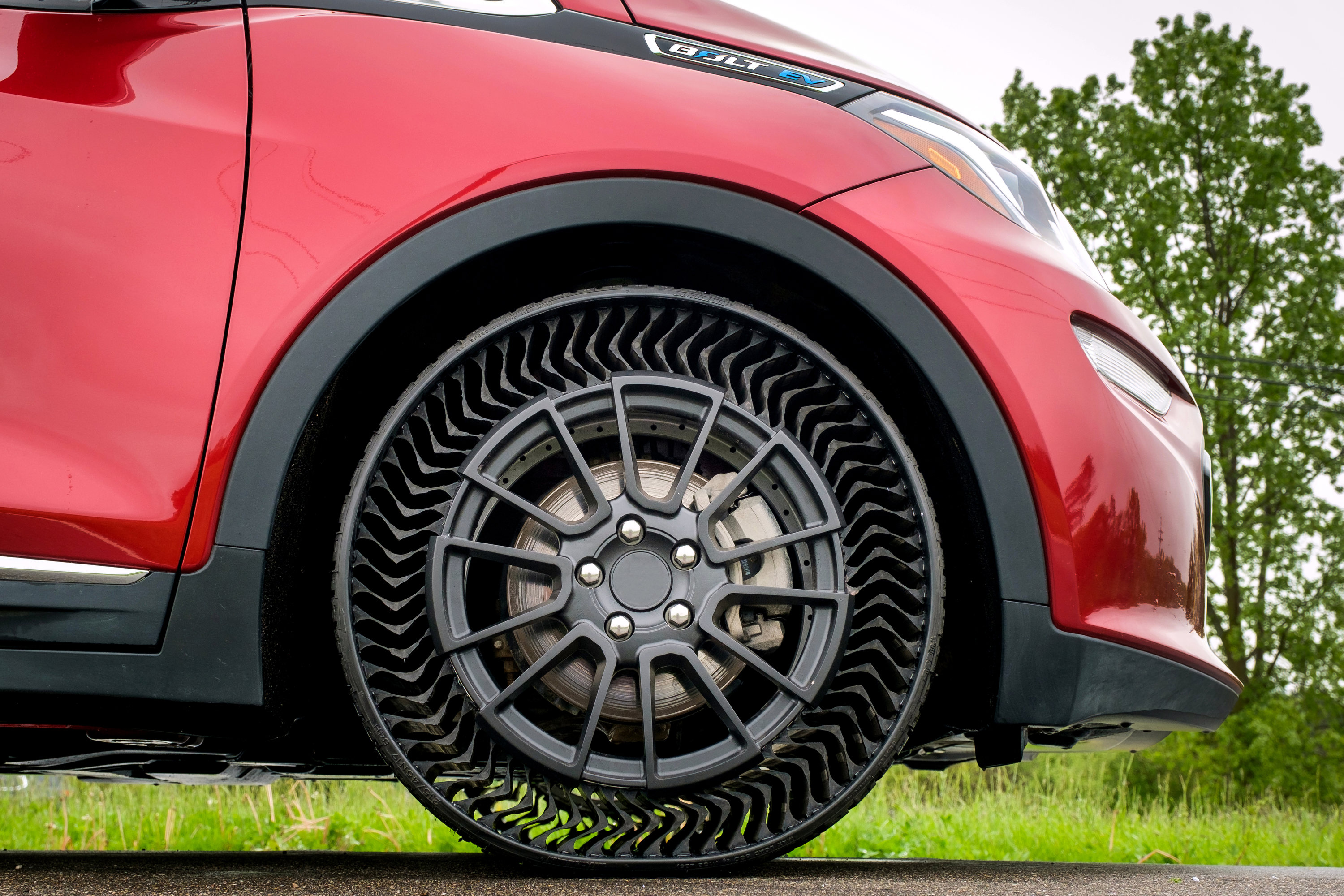 As soon as 2024, a new tire could be rolling out onto streets everywhere, reducing risks and frustrations by eliminating the most problematic aspect of tires — the air.

Related: How Long Do Tires Last?

This week, Michelin and GM announced that they’ll be partnering up to, quite literally, reinvent the wheel. Their airless tire is called the Uptis, an acronym for “Unique Puncture-Proof Tire System.” It has an aluminum wheel assembly surrounded by 3-D-printed “spokes” made of rubber, high-strength resin and embedded fiberglass.

While it looks similar to Michelin’s current airless solution, the Tweel, the company said in a statement that the Uptis will be an “evolution” of Tweel technology built to handle both the weight and speed of passenger cars.

GM will equip a test fleet of Chevrolet Bolt EVs with the Uptis prototype and send them out for road tests in Michigan starting in the summer. And while you may not be able to get your hands on a vehicle sporting these tires until 2024, here are five features you can look forward to when the rubber meets the road:

1. No More Flats and Blowouts

Perhaps the feature of the Uptis airless tire most important to drivers will be the elimination of blowouts and flats, reducing the risk of accidents, traffic congestion and general frustration caused by them.

2. Say So Long to Spares

Run over a nail? With the Uptis, that’s no longer a tire’s death sentence. And if you don’t yet know how to change a tire, you may not have to learn: Tires that don’t puncture or blow out don’t need a stowed-away spare to replace them, meaning no more roadside tire changes!

Airless tires should be expected to last longer than traditional tires — not just because of the puncture-proof technology, but also because of the elimination of wear and tear caused by under- and overinflation. There’s no air involved, so the tires are always at the correct pressure. You’re also not going to need to take these tires in for pressure checks or inspections for damage throughout their long lifespans, saving you time and money in the long run.

This all comes at no noticeable change in performance to the driver. The Uptis, designed with passenger vehicles in mind, drives like a zero-pressure (run-flat) tire, Michelin said in a statement.

You can breathe easy knowing that the Uptis is more sustainable than traditional tires. Airless wheels will reduce the number of tires scrapped before the end of their projected lifecycles.  They’ll also reduce the amount of raw materials, energy and emissions linked to the production of all those now-unnecessary spare tires.