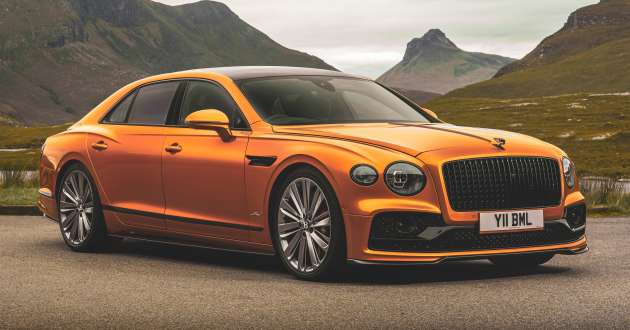 Bentley says it has completed its new portfolio of grand tourers with the introduction of the new Flying Spur Speed, which is a driving-focused version of its third-generation four-door sedan. Sitting above the Flying Spur S that made its debut in June this year, the Flying Spur Speed comes exclusively with the company’s 6.0 litre twin-turbo W12 engine.

The mill, which also powers the Flying Spur Mulliner, continues to churn out 635 PS (626 hp) at 6,000 rpm and 900 Nm of torque from 1,500 to 5,000 rpm. As Bentley has stopped offering the W12 powerplant for the standard Flying Spur, and none of the other variants (Azure and S) can be specified with it, the Speed and Mulliner are two of a few Bentley models to still feature the iconic W12.

Paired with a ZF-sourced eight-speed dual-clutch transmission and active all-wheel drive system, the Speed takes 3.8 seconds to get from 0-100 km/h and will hit a top speed of 333 km/h – these figures are identical to the Mulliner. Bentley says the amount of torque sent to both axles can be varied depending on the selected drive mode, with the AWD system able to send up to 480 Nm to the front in Comfort mode. For a livelier time behind the wheel, the system can limit torque to the front axle to 280 Nm, diverting more of it to the rear wheels instead. If that isn’t enough, torque is also managed across each axle by a torque-vectoring-by-brake system.

Other driving-related features that come as standard include all-wheel drive and Bentley’s Dynamic Ride system, the latter operating on a 48-volt architecture to manage the stiffness of the anti-roll bar by way of an electronic actuator unit to combat cornering forces and keep the limo level. Another necessity to keep things in check are the beefy brakes, with discs measuring 420 mm at the front.

In terms of styling, the Bentley-branded calipers are also painted gloss red but can be finished in gloss black for a cost. The Speed also sports a dark tint finish for its grille, headlamps, taillights and badges. A set of 22-inch wheels are included as standard and available in gloss black, dark tint or silver finishes. There’s also an alternative wheel design that appears sportier and that is available in Gloss black or Pale Brodgar Satin. 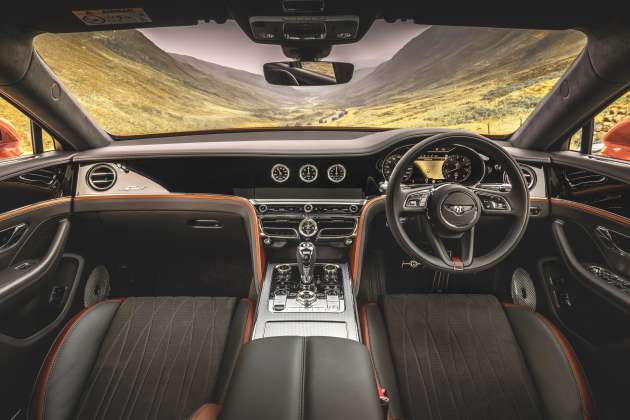 For those that demand even more visual presence, Bentley will happily offer the Speed with the Styling Specification package. This adds on a carbon-fibre front bumper splitter, side skirts with metallic Bentley badges, rear diffuser and boot lid spoiler. Another option is the Blackline Specification that replaces most of the car’s exterior brightwork with darkened components.

On the inside, there are now 15 leather colours to choose from instead of just five. Piano Black veneer trim is standard, but customers can opt for either Crown Cut Walnut, Dark Stained Burr Walnut or Dark Fiddleback Eucalyptus at no additional cost. The sedan also comes with model-specific instrument cluster graphics, 24-way adjustable front and 14-way adjustable rear seats, sports pedals and further touches to remind everyone you got the Speed.

Bentley believes the Speed will be very popular in the United States and Europe, with an expected uptake of around a third of Flying Spur orders. This is followed by the Middle East where it anticipates the driving-focused model to make up 20% of Flying Spurs orders.