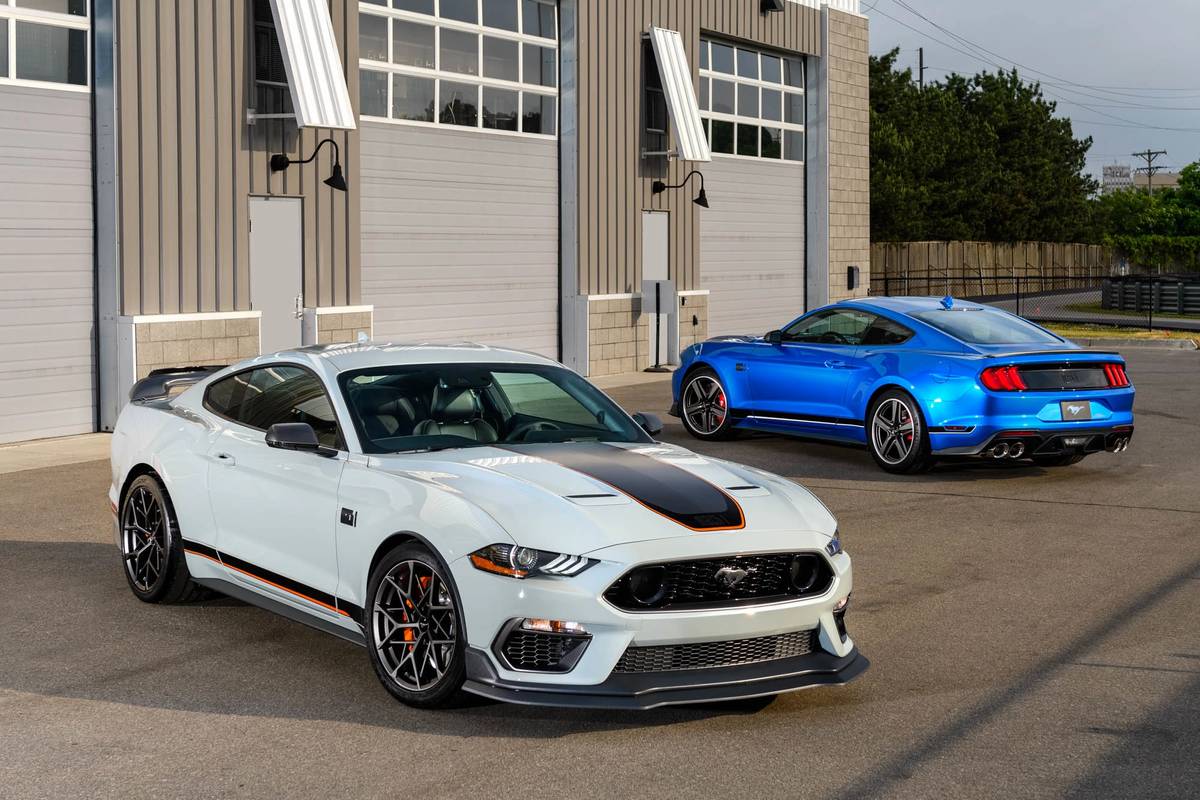 After a break of 17 years, the Ford Mustang Mach 1 is roaring back onto the muscle-car scene with a 480-horsepower, 5.0-liter V-8 under its hood, plus plenty of parts taken from the mighty Shelby GT350 and GT500 — carrying a just-announced price rolling up on $53,000 when it arrives at dealerships in the spring. Time has been kind to the Mach 1 because when it was last offered for the 2004 model year, it was powered by a 305-hp, 4.6-liter V-8. With exactly 175 more ponies than its predecessor, the 2021 Mustang Mach 1 is aimed directly at rivals like the Chevrolet Camaro SS and Dodge Challenger R/T.

But wait, doesn’t the regular Mustang GT already have a potent 460-hp V-8 engine? And come to think of it, the Mustang Bullitt has exactly the same 480 hp and 420 pounds-feet of torque that you get in the new Mach 1. What makes the Mach 1 stand out among other high-performance ’Stangs, not to mention bitter rivals from Chevy and Dodge? 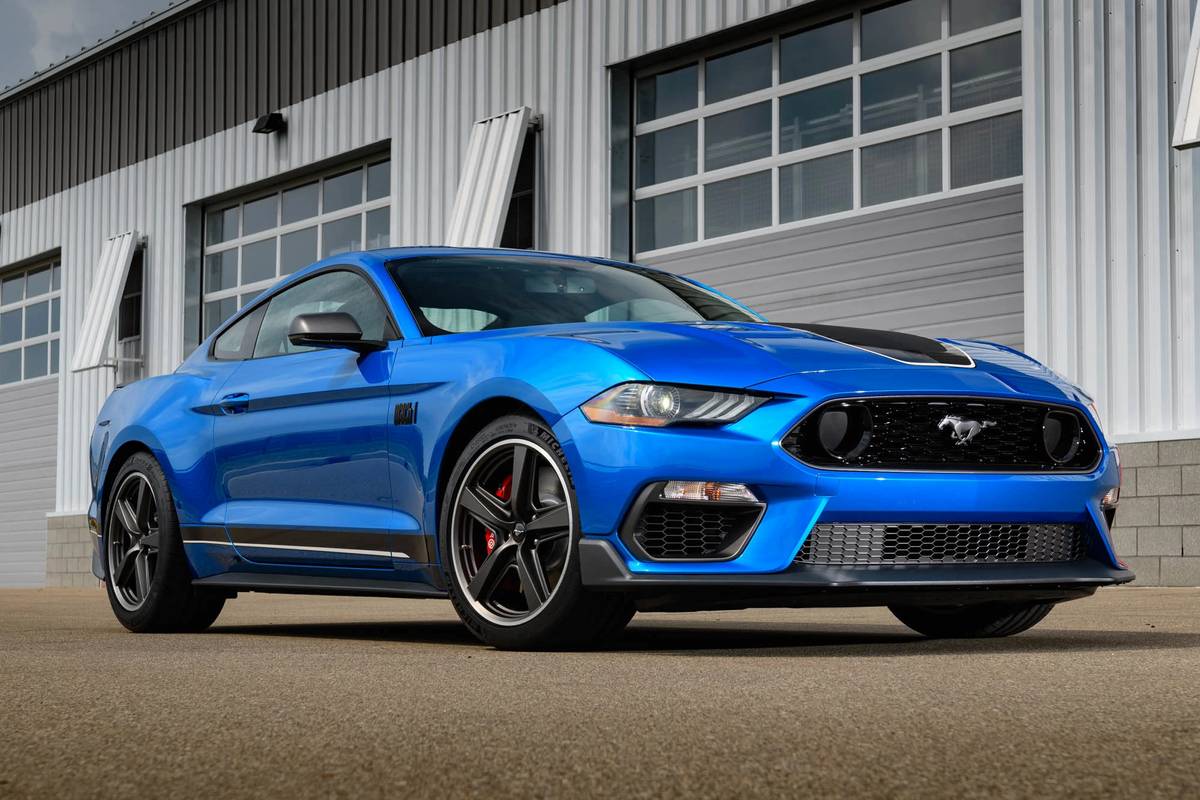 To start, the Mach 1 plays on the model’s long history in the Mustang lineup. The first Mach 1 arrived in 1969 and, as you can see, wild racing stripes and a blacked-out hood are retro design elements found on the 2021 Mach 1. Honoring that heritage, a Mach 1 buyer has the choice of three reflective accent stripes — red, white or orange — alongside the satin-black side stripes and hood.

Also harking back to the original 1969 model, the Mach 1’s front grille is finished in a deep black mesh pattern, with a pair of fake headlights worked into the design. According to Ford, the Tarnished Dark-painted alloy wheels (19 inches front and rear) are a modern interpretation of the classic Mach 1’s Magnum 500 style wheels. There are eight exterior color choices: Race Red, Velocity Blue, Oxford White, Grabber Yellow, Shadow Black, Iconic Silver, Twister Orange and the Mach 1-exclusive Fighter Jet Gray with the available Appearance Package.

There’s much more to this Mustang than racing stripes and fancy wheels, of course. In addition to the growling V-8 engine, Mach 1 customers can choose between a six-speed manual transmission or optional 10-speed automatic. The manual gearbox is taken directly from the Shelby GT350 and comes with features like rev-matching, its own dedicated oil-cooling system and a short-throw shifter. Automatic Mach 1 models also include a transmission oil cooler and upgraded torque converter. 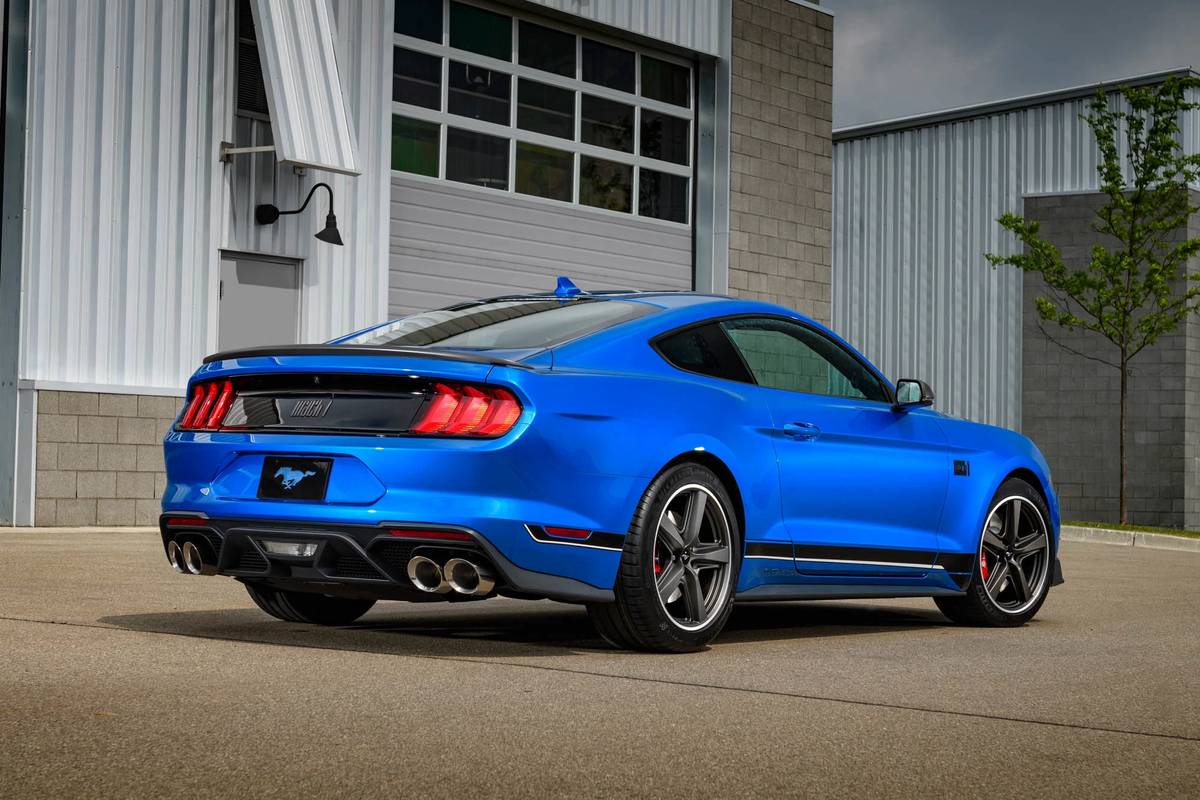 A big deciding factor in your transmission choice could be the available Handling Package. This is offered exclusively with the six-speed manual gearbox and includes wider wheels, a larger front splitter, rear spoiler with integrated Gurney flap, and subtle aerodynamic changes borrowed from the Mustang Shelby stable to improve airflow around the front and rear wheels.

The effect is greater drag to keep the Mach 1 planted to the road (or track) at high speed. Ford says the Mach 1 in standard format has 22% more downforce than a Mustang GT equipped with the Performance Pack 1 option package. Jump to the Mach 1 with the Handling Package, and Ford estimates downforce is a whopping 150% more than what you get in that same Mustang GT. If you plan on taking your Ford pony car to a racetrack, this added aero grip will be your new best friend in high-speed corners.

The suspension and steering have been upgraded with features like stiffer sway bars and front springs, stiffer bushings in the rear subframe and a rear toe link taken from the Shelby GT500. Other racetrack-friendly hardware on the Mach 1 include two side heat exchangers to help better cool the engine and transmission, along with a rear-axle cooling system and a more aggressive lower rear diffuser borrowed from the Shelby GT500 (because let’s admit that if you’re going to start borrowing things, a Mustang with 760 hp is a good place to start). The world of very fast Ford Mustangs is becoming an increasingly crowded place … and, nope, we’re not complaining.

This Video Shows An Articulated Lada Is Obviously A Bad Idea

This looks like a Lada fun, though. Have you ever wondered what would happen if you decided to grab some power tools, a few surplus parts, and turn your humble…

A human touch versus production safety. It was in 1913 when Ford debuted their breakthrough assembly line to help speed up the production process of the Model T. This innovation…
F1

Renault Formula 1 driver Esteban Ocon believes that he’s making good progress in qualifying, despite missing out on Q3 in Portugal. The Frenchman finished the Q2 session in Portimao in…

Williams: No change in Russell’s approach despite speculation

Williams says nothing has changed in George Russell’s approach to Formula 1 despite the speculation about his future in the championship at this weekend’s Portuguese Grand Prix.  Russell has been…
News & Features

Filson has just joined with Ford for a special Wildland Fire Rig Bronco concept. The off-roader comes in a U.S. Forest Service green paint job and sees a four-door Bronco…

Passenger car production had crossed the 1 million mark in 2005-06. Tata Motors has announced that it has achieved a new production milestone. Since its inception, the carmaker has produced…
We and our partners use cookies on this site to improve our service, perform analytics, personalize advertising, measure advertising performance, and remember website preferences.Ok