The Bentley Bentayga Speed – the world’s fastest SUV – gets a cosmetic makeover inside and out, but the W12 engine’s thunderous performance remains unchanged 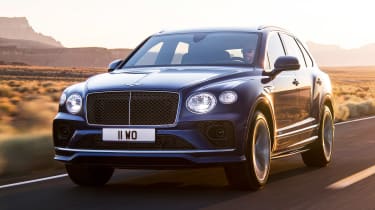 This is the revised Bentley Bentayga Speed. The world’s fastest SUV has been given a makeover for 2020, which falls in line with the rest of the recently updated line-up.

Cosmetic changes on the outside aim to align the Bentayga’s styling more closely with the rest of the Bentley range. At the front, that means there’s a more upright grille flanked by two pairs of swept back LED lighting units (each with intricate, jewel-like detailing), while the Speed specific front bumper gets revised air intakes and an extra strip of brightwork along its lower edge.

Bentley’s 22-inch wheels remain standard, while around the back, the Bentayga Speed’s old square tail lamps have been ditched in favour of Continental GT-like ovoid units. These are matched by a pair of revised exhaust tips in the deep rear bumper. 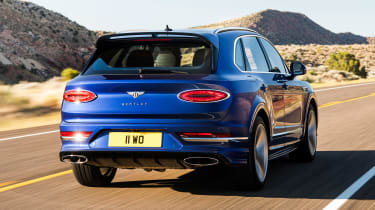 Buyers can also select a Black Specification. This swaps out the chrome exterior pieces with either black or carbon fibre trim; the wheels are also painted black and the large rear wing is replaced with a carbon fibre item.

The changes are equally extensive inside. The centre of the dash is all new; reshaped vents sit above a new infotainment system with a larger 10.9-inch touchscreen. The new system includes an improved navigation system with improved 3D mapping, real-time traffic information and over-the-air updates.

The improvements to in-car tech extend beyond the touchscreen, with a new digital driver’s display and a new head-up display that is more detailed than before – both in terms of graphics and the information it offers.

Mechanically, the Bentayga Speed is unchanged. Power is courtesy of a 6.0-litre twin-turbocharged W12 engine producing 626bhp and 900Nm of torque. It’s enough to let the Bentayga cover the 0-62mph sprint in 3.9 seconds, and on to a top speed of 190mph.

Prices for the updated Bentayga Speed are still to be confirmed, but the pre facelift model, released mid-2019, was priced from £182,000.