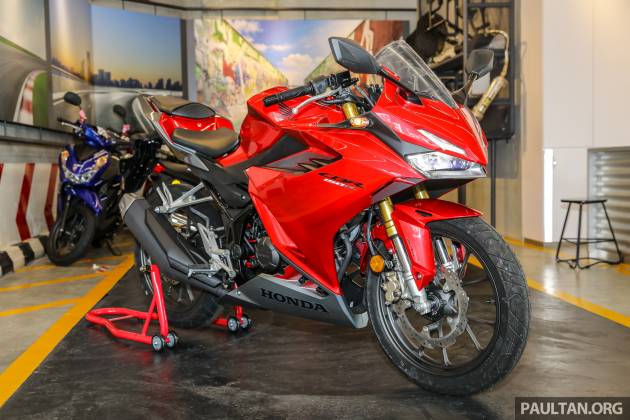 After the launch announcement, we got up close and personal with the 2021 Honda CBR150R, priced at RM12,499 in Malaysia before road tax, insurance and registration. The gallery (and forthcoming walk around video) was arranged for paultan.org courtesy of authorised Boon Siew Honda Malaysia dealer Ee Tiong Motorsports in Setapak, Kuala Lumpur.

Seen in the flesh, as it were, the CBR150R is a very striking motorcycle, looking like a slimmed down and smaller CBR1000RR. From the front, the fairing shape and design is lifted right off the Honda CBR250RR, while the seat unit strongly resembles the one on the CBR1000RR and CBR600RR.

As a single-cylinder, 149 cc motorcycle, the CBR150R is necessarily slim and svelte when seen from the top down, and getting on the bike, you are aware of the 139 kg the bike weighs, or rather, the lack of it. The seating position places the rider in a sporty stance, but not quite the full racer tuck. 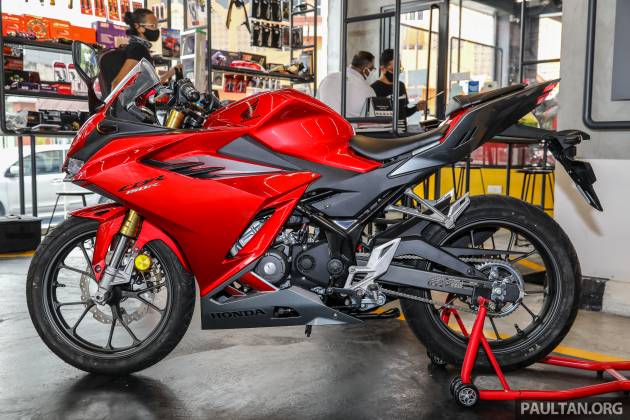 The small windshield affords a modicum of protection, but for the CBR150R and its 16 hp and 13 Nm of torque, this will likely be more of a styling thing rather than any real use at track speeds. The seat itself is cut slim and with the 788 mm seat height, almost all riders will be able to find sure footing when stopped.

The instrument panel inside the cockpit is an LCD unit, with numeric speedometer and bar tachometer, the readout being clear and legible. A large gear indicator is also provided and there is a fuel gauge, clock, two trip meters, an odometer and both average and real time fuel consumption readouts.

The LED turn signals in front do perform as running lights while the rear turn signals will blink in unison as hazard flashers under hard braking. The LED tail is a split unit, with one LED element functioning as a tail light and the other for the brake.

We are looking forward to getting the CBR150R on review in due course, and perhaps pitting it against the Yamaha YZF-R15 in a shootout, like what paultan.org has done previously with bigger machines like the litre-class superbikes and the RM50,000 bike shootout.

What do you think? Would that be something you would want to read, or watch? Leave a comment with your thoughts, below.