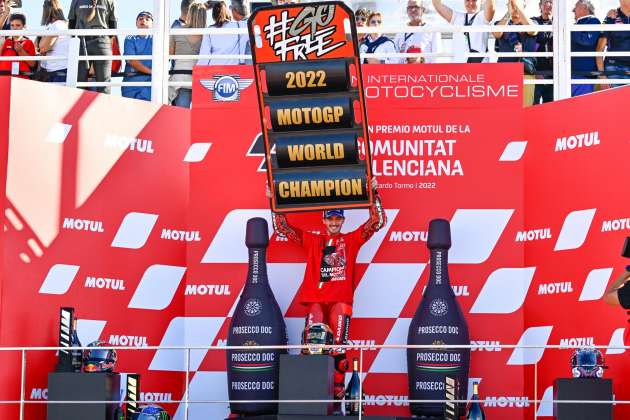 A decade and a half of waiting and Ducati finally has a world champion with Francesco “Pecco” Bagnaia’s win in the final race of the 2022 MotoGP season. While many were expecting the championship battle to be decided at the Petronas Grand Prix of Malaysia at Sepang two weeks ago, the title fight came down to the final round in Valencia, Spain.

Coming into the last race of the year, Bagnaia had a 25 point lead over 2021 MotoGP World Champion Fabio Quartararo of Monster Energy Yamaha Racing after his win in Sepang. Quartararo needed to win the race with Bagnaia finishing outside the points, making for very long odds.

Action started from the get-go as Quartararo and Bagnaia clashed in the opening laps, leaving Bagnaia’s Ducati missing a wing. Backing off to preserve his points and his guaranteed championship crown, Bagnaia was content to finish the race ninth position. 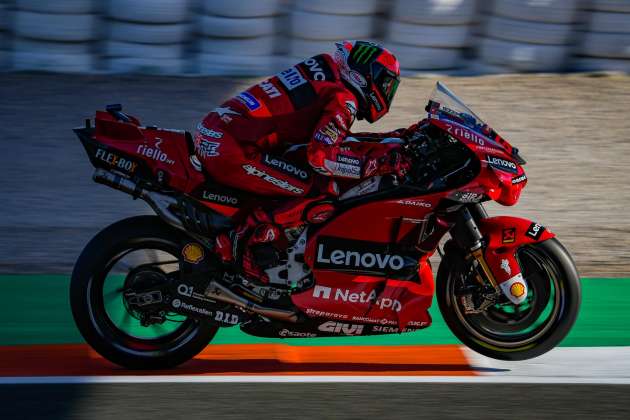 Meanwhile, Quartararo gave chase to the leading group of Alex Runs (Suzuki Ecstar), Brad Binder (Red Bull KTM) and Jorge Martin (Prima Pramac Racing) but there simply wasn’t enough time or laps for him to catch up, leaving the Frenchman with fourth place and second in the World Championship.

At the end of the 2022 MotoGP season with 20 races, Ducati wins the triple, the Riders’, Constructors’ and Team championships. Meanwhile, Team Suzuki Ecstar’s Alex Runs, in what is Suzuki’s final race in MotoGP, convincingly led from start to finish to reward the team with one last race win.